It is normally a good thing to keep children with their parents. But not all times are normal. When parents are abusing their children, it is usually best to separate them. When a parent commits a crime and is sent to prison, then they are separated from their children, whether we like it or not.

That is usually how things go. But the left has found a new issue to make a stink about. And as usual, the leftists are awash in hypocrisy, double standards, and plenty of lies and falsehoods. I refer to recent debates about current border policy in the US.

Leftists are now up in arms that some children are separated from their parents at the US-Mexican border. That countless folks try to get into the US from south of the border is nothing new. But previously it was often just men who sought to get in, especially as illegal immigrants. 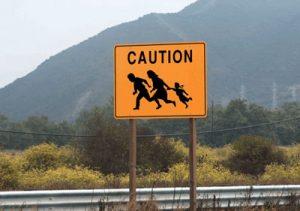 But of late more and more of these men have brought family members – or who they claim are family members – in the hopes of getting a better chance at making it into America. Even the hyper-leftist New York Times has admitted that there are some real problems here:

Protecting children at the border is complicated because there have, indeed, been instances of fraud. Tens of thousands of migrants arrive there every year, and those with children in tow are often released into the United States more quickly than adults who come alone, because of restrictions on the amount of time that minors can be held in custody. Some migrants have admitted they brought their children not only to remove them from danger in such places as Central America and Africa, but because they believed it would cause the authorities to release them from custody sooner. Others have admitted to posing falsely with children who are not their own, and Border Patrol officials say that such instances of fraud are increasing.

Recent changes in official policy on this by the Trump Administration – one that pushes a new “zero tolerance” approach – have resulted in hundreds of children being separated from adults – whether they are their actual parents or not is a moot point.

But a bit of history is essential here. Back in 1997 the Flores Consent Decree was passed which established a national policy on the detention, release, and treatment of all minors in the custody of the Immigration and Naturalization Service.

It had to do with how long unaccompanied illegal immigrant children could be kept in custody. The limit was 20 days, but the policy specifics were later amended. This decree of course came about under the Bill Clinton administration, and the Obama administration also went along with it – and then some.

The concerns of the Trump Administration are that it can take quite a while to adjudicate the cases of these would-be arrivals, and the question is: should children stay with their detained parents for who knows how long, or should they be separated, so as not to remain overly long in detention?

As I said at the beginning, whenever a crime is committed and/or a court case is determining the crime, and a prisoner is in custody, children are almost always separated as a matter of course. This border situation is a bit new and tricky, so politicians and jurists are looking at how best to deal with things, and how the best outcomes of children can be achieved.

But leftists are milking this for all its worth, turning it into a political football. They are screaming about Trump ripping children away from their parents, etc. Um, double standards much? Almost all of these lefties also fully support things like abortion, surrogacy and the like. And guess what happens then? Yep, sure enough: children are often violently separated from their parents. But then we only have crickets chirping.

Getting back to this particular debate over Trump and his policies, let me quote a few others. Elizabeth Llorente reminds us that everything Trump is now being slammed for was basically taking place under Obama. She writes:

The Obama administration actually expanded the system of detaining families – typically mothers and their minor children – after a huge surge of Central Americans along the U.S.-Mexican border in 2014. The policy resulted in many minors being detained in various locations, in much-criticized conditions, either with their families or by themselves, if they had crossed the border alone.
Videos and photos at the time showed children in tears, many of them still wearing dirty clothes, in detention facilities where they were kept with their families. The conditions – which ranged from six adults and children sleeping crammed on two mattresses laid out on concrete floors, to sick minors not receiving medical care – were documented in many news accounts and reports by human rights groups.
At the time, Obama administration officials argued they had no choice but to implement policies intended to deter families from entering the U.S. illegally. Trump administration officials have made similar arguments.
The difference is the Trump administration is now taking children away from parents who are being prosecuted criminally for offenses that often were once considered civil violations. The children are not being charged with crimes, and are being placed in the custody of the Department of Health and Human Services.
Speaking at the National Sheriffs’ Association conference in New Orleans on Monday, Attorney General Jeff Sessions said, “We do not want to separate parents from their children.”
But Sessions said word had gotten out before Trump became president that anyone who tried to cross the border with a minor would almost certainly be “given immunity from prosecution.”
“Word got out about this loophole, with predictable results,” Sessions said. “The number of aliens illegally crossing with children between our ports of entry went from 14,000 to 75,000 — that’s a five-fold increase — in just the last four years.”
“We cannot and will not encourage people to bring children by giving them blanket immunity from our laws,” Sessions said.
www.foxnews.com/politics/2018/06/18/years-backlash-obama-policy-on-illegal-immigrants-children-was-also-slammed-by-critics.html

And some wise words by Ben Shapiro deserve to be heard here. He offers some of the history that I did above, then looks at some of the myths about this issue. He writes:

2. Immigrants Seeking Asylum Are Being Punished For Seeking Asylum. This is plainly untrue as well. Immigrants who come to points of entry to seek asylum aren’t actually illegally in the country – they’re not arrested. They’re processed through ICE, and their children stay with them. If, however, illegal immigrants cross the border illegally, the Trump administration now treats them as criminals. If they choose deportation, they aren’t separated from their kids; if they choose to apply for asylum, they stay in the country longer than 20 days, and their kids have to be removed by operation of law.

3. The Trump Facilities Are Awful Thanks To Trump. They may be awful, but they were just as awful under President Obama…. Trump isn’t forcing children away from parents. He’s enforcing the law on the books. The legislature can fix that law at any time. The facilities he’s using are the same facilities Obama used. Pretending that this is Japanese internment (as Laura Bush suggested) or the Holocaust (as General Michael Hayden suggested) is ridiculous. This policy ought to be fixed. But lying about it isn’t designed to fix it. It’s designed to prevent a fix by allowing Democrats to play political football with children, believing they’re winning a victory by holding Trump’s feet to the fire with pictures of crying children.
www.dailywire.com/news/31980/media-are-lying-about-trump-separating-illegal-ben-shapiro?utm_source=facebook&utm_medium=social&utm_content=062316-news&utm_campaign=benshapiro

Finally let me offer the concluding words from a recent article by Rich Lowry on this:

Congress can fix this. Congress can change the rules so the Flores consent decree will no longer apply, and it can appropriate more money for family shelters at the border. This is an obvious thing to do that would eliminate the tension between enforcing our laws and keeping family units together. The Trump administration is throwing as many resources as it can at the border to expedite the process, and it desperately wants the Flores consent decree reversed. Despite some mixed messages, if the administration had its druthers, family units would be kept together and their cases settled quickly.

The missing piece here is Congress, but little outrage will be directed at it, and probably nothing will be done. And so our perverse system will remain in place and the crisis at the border will rumble on.
www.nationalreview.com/2018/05/illegal-immigration-enforcement-separating-kids-at-border/

Clearly these are rather complex and difficult issues, and much thought and care is needed as to how best to proceed. But the hysteria and hypocrisy of the left is not helping things at all.

For those who would rather watch and listen than read, these two videos are useful:

13 Replies to “Trump, Borders, and Separating Children From Parents”