There IS such a thing as apostasy, and there ARE such things as apostates. When folks deny key biblical truths and effectively call the Lord Jesus Christ a liar, they have become apostates. One way in which apostasy rears its ugly head so often of late is over the whole matter of homosexuality.

That sounds like apostasy to me: deliberately moving away from Christian truth once upheld and affirmed. Let me offer two clear examples of this rainbow apostasy which have just occurred. The first is from the UK. Many Christians know and love John and Charles Wesley, and the ministry they had three hundred years ago. 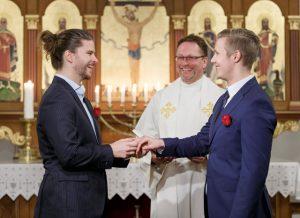 In many respects the Methodist Church that came out of their ministry is today a far cry from what it was back then. Like so many denominations it has in good measure been taken over by theological liberals. Yes, true biblical Christians can still be found in Methodist churches, but in many of them the glory of the Lord has departed.

Consider this news item: the oldest Methodist building in the world, “the New Room,” which was built way back in 1739, is now going to be used for celebrating what the Bible calls an abomination. As Christian Concern in the UK says:

Tomorrow morning, a group called Christians At Bristol Pride will hold a ‘Service of Celebration’ with the sole intention of affirming LGBT+ lifestyles for Christians and then attending Pride Bristol. The LGBT+ group has secured the use of The New Room in John Wesley’s original chapel, the oldest Methodist building in the world. This is despite Wesley’s own views on homosexuality, and the stated position of the Methodist Church on human sexuality.

Oh dear. How the mighty have fallen. Of course the rot had already set in years ago. Back in 1993 for example an annual Methodist conference, held in Derby, looked at issues of human sexuality. The sixth and final resolution passed then said this:

Conference recognises, affirms and celebrates the participation and ministry of lesbians and gay men in the church. Conference calls on the Methodist people to begin a pilgrimage of faith to combat repression and discrimination, to work for justice and human rights and to give dignity and worth to people whatever their sexuality.

However, talk about mixed messages. Its fourth resolution said this:

The Conference reaffirms the traditional teaching of the Church on human sexuality; namely chastity for all outside marriage and fidelity within it. The Conference directs that this affirmation is made clear to all candidates for ministry, office and membership, and having established this, affirm that the existing procedures of our church are adequate to deal with all such cases.

Um, how can you affirm the biblical position on marriage yet pretend homosexuality is just peachy, and allow the ‘ministry’ of homosexuals? John Wesley had said this about homosexuality while commenting on Romans 1:27: “Receiving the just recompense of their error – Their idolatry being punished with that unnatural lust, which was as horrible a dishonour to the body, as their idolatry was to God.”

Christian Concern also mentions that there will be a protest being held there:

In response, there will be a witness from Pastor Dia Moodley of Spirit of Life Church, Bristol, and a rally for truth taking place at 9.30am tomorrow, Sat 14th July, outside John Wesley’s chapel at: The New Room, 36 The Horsefair, Bristol, BS1 3JE. If you can, please join their witness and rally to show your support for the biblical view of human sexuality, and highlight the need for the Methodist church to hold to its own core teachings on human sexuality.

And the head of Christian Concern, Andrea Williams, said this:

The heritage of sound biblical teaching on human sexuality that was faithfully proclaimed by Christian men like John Wesley should be upheld by the church, not torn down. Methodism is dear to my heart, and I find it very sad to see buildings intended for the proclamation of the glorious gospel of our Lord Jesus Christ being used to celebrate a sexual lifestyle that He condemned.

No doubt John Wesley would be spinning in his grave over all this. And things are no better in Australia. The Uniting Church has also gone down the path of pink apostasy. The UCA was created in 1977 when most of the Methodist, Presbyterian and Congregational churches merged.

The UCA has also been heavily infected with theological liberalism, and homosexuality has been affirmed by many. Now their national assembly has just voted overwhelmingly to include homosexual weddings in their churches. As one report puts it:

The Uniting Church in Australia’s (UCA) National Assembly has voted to allow same sex couples to marry in the church. The vote means the church will provide a choice of marriage services. A new marriage rite will be written for “two persons” to marry, and will sit alongside the UCA’s existing marriage service for men and women. This is often described as a “Two integrities” solution which attempts to allow two beliefs about marriage to co-exist in the one church structure.

Meeting in Box Hill, Melbourne, the 265-member Assembly which is the peak decision making body for the church, has debated the issue for several days this week moving into closed session a number of times. The final vote in favour of change was overwhelming.

As with the Methodists, we have a number of similarities:
-the rot has been setting in for many years
-many in the denomination have been happy to replace biblical authority with the trendy opinions of men
-some churches have caved big time while others have sought to stand firm

Some faithful Christians in the UCA have decided to stay and fight, while others have already left, forming breakaway churches that remain true to Scripture. I have written elsewhere about these options in the UCA, and whether a full biblical restoration of it is now possible: billmuehlenberg.com/2018/05/05/wisdom-biblical-truth-and-apostasy/

But both these cases of apostasy are just part of a much bigger theological and moral drift. And plenty of other Christian leaders, churches and denominations have also been involved in this sort of apostasy. So what we have here are simply two more recent examples of the death of the church in so many parts of the West.

Those who choose to stay and fight need our prayers. And those who say ‘enough is enough’ and leave also deserve our prayers. These are very dark days indeed for the church. And the issue of homosexuality is one of the leading litmus tests as to whether a church will remain faithful to the teachings of Jesus Christ and the Word of God, or whether they will simply jump in bed with the world and its immoral, amoral and unbiblical agendas.

I feel that very grave dangers hang over us. This results from the apostasy of the great part of Europe from the Christian faith. Hence a worse state than the one we were in before we received the Faith. For no one returns from Christianity to the same state he was in before Christianity but into a worse state: the difference between a pagan and an apostate is the difference between an unmarried woman and an adulteress. For faith perfects nature but faith lost corrupts nature.