Home-schooling continues to rise and rise for millions of parents throughout the West as the state school system continues to erode. Far too often our schools are turning out moral miscreants and intellectual zombies who know everything about radical political and cultural agendas, but cannot even put together a coherent sentence.

Most people in our public education system are not taught how to think, but what to think. And overwhelmingly anti-faith, anti-family and anti-life agendas and indoctrination predominate in these schools. No wonder so many concerned parents are looking for alternatives.

One person was well ahead of the game in all this, knowing just how bad things would become with a nationalised public school system. And his warnings came nearly a century ago. I refer to the late, great J. Gresham Machen (1881-1937), one of the more important Christian thinkers of his day. 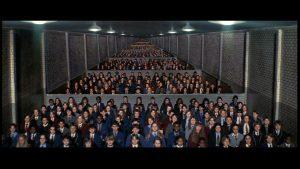 He was interested and involved in many things, not least of which was education. The American Presbyterian theologian and professor was involved in the education wars for much of his adult life, having to eventually leave Princeton Seminary to found Westminster Seminary in 1929.

Machen long fought theological liberalism (see his important 1922 volume, Christianity and Liberalism), but he also fought statism and socialism, especially in relation to education. So he often wrote incisive pieces on education, especially about the need for Christian education, unencumbered by the State.

For example, in the introduction to his classic 1922 volume Machen speaks to this quite forcefully. He discusses the dumbing down of our culture, and then says this:

This unprecedented decline in literature and art is only one manifestation of a more far-reaching phenomenon; it is only one instance of that narrowing of the range of personality which has been going on in the modern world. The whole development of modern society has tended mightily toward the limitation of the realm of freedom for the individual man. The tendency is most clearly seen in socialism…

The result is an unparalleled impoverishment of human life. Personality can only be developed in the realm of individual choice. And that realm, in the modern state, is being slowly but steadily contracted. The tendency is making itself felt especially in the sphere of education….

The dominant tendency, even in a country like America, which formerly prided itself on its freedom from bureaucratic regulation of the details of life, is toward a drab utilitarianism in which all higher aspirations are to be lost.

A public school system, in itself, is indeed of enormous benefit to the race. But it is of benefit only if it is kept healthy at every moment by the absolutely free possibility of the competition of private schools….

Place the lives of children in their formative years, despite the convictions of their parents, under the intimate control of experts appointed by the state, force them then to attend schools where the higher aspirations of humanity are crushed out, and where the mind is filled with the materialism of the day, and it is difficult to see how even the remnants of liberty can subsist. Such a tyranny, supported as it is by a perverse technique used as the instrument in destroying human souls, is certainly far more dangerous than the crude tyrannies of the past, which despite their weapons of fire and sword permitted thought at least to be free.

Those were incredibly incisive and prophetic words in 1922. He often wrote and spoke on this topic. A collection of nine of his important addresses and essays on the topic are gathered together in a very helpful 1987 volume edited by John Robbins called Education, Christianity and the State.

Some of these important pieces are also well worth quoting from. In a 1912 address he gave on “Christianity and Culture” he said this: “Our whole system of school and college education is so constituted as to keep religion and culture as far apart as possible and ignore the question of the relationship between them.”

He goes on to say that there are several ways to respond to this, such as allowing Christianity to be subordinate to culture, or seeking to destroy culture. But the way forward is for Christianity to permeate all of culture, including the sphere of education: “The church must seek to conquer not merely every man for Christ, but also the whole of man.”

He reminds us of the importance of ideas, and that bad ideas can have bad consequences: “What is today a matter of academic speculation begins tomorrow to move armies and pull down empires.” We have seen plenty of that happen last century. Ideas certainly have consequences, thus the importance of who controls education.

In another very important piece from 1934, “The Necessity of the Christian School,” he continues these thoughts. Machen says this: “We are witnessing in our day a worldwide attack on the fundamental principles of civil and religious freedom…. It took many centuries of struggle – much blood and many tears – to establish the fundamental principles of our civil and religious liberty; but one mad generation is sufficient to throw them all away.”

But while tyranny itself is nothing new, the technique of tyranny has been enormously improved in our day; the tyranny of the scientific expert is the most crushing tyranny of all. That tyranny is being exercised most effectively in the field of education. A monopolistic system of education controlled by the State is far more efficient in crushing our liberty than the cruder weapons of fire and sword. Against this monopoly of education by the State the Christian school brings a salutary protest; it contends for the right of parents to bring up their children in accordance with the dictates of their conscience and not in the manner prescribed by the State.

He warned about things like a federal department of education which would cover the education of all: “When you are dealing with human beings, standardization is the last thing you ought to seek. Uniformity of education under one central governmental department would be a very great calamity indeed…. That is one reason why I favor the Christian school. I favor it in the interests of American liberty.”

But he also promotes it as best befitting the Christian worldview and the needs of the believer:

A Christian boy or girl can learn mathematics, for example, from a teacher who is not a Christian; and truth is truth however learned. But while truth is truth however learned, the bearings of truth, the meaning of truth, the purpose of truth, even in the sphere of mathematics, seem entirely different to the Christian from that which they seem to the non-Christian; and that is why a truly Christian education is possible only when Christian conviction underlies not a part, but all, of the curriculum of the school. True learning and true piety go hand in hand, and Christianity embraces the whole of life — those are great central convictions that underlie the Christian school.

He says that even non-Christians can appreciate the importance of Christian schools as “a true bulwark of the State”. But more importantly: “I can see little consistency in a type of Christian activity which preaches the gospel on street corners and at the ends of the earth, but neglects the children of the covenant by abandoning them to a cold and unbelieving secularism.”

He fought long and hard against a standardised, universalised public education system. Given how very bad indeed the state school system is today in the US and the West, his warnings were clearly prophetic. In 1926 he gave a talk on those pushing the need for a public education department.

In it he said that standardisation can sometimes be a good thing, such as on the Ford automotive assembly line. However, the aim of education is just the opposite. It is

not to conform human beings to some fixed standard, but to preserve individuality, to keep human beings as much unlike one another in certain spheres as they possibly can be. But that great aim of education, that personal, free, truly human aspect of education, can never have justice done to it under federal control. And that is the reason why the standardization of education that has already been carried on through the federal bureaus is deleterious.

And he saw what would become a driving force in the move to home-schooling: “I am opposed to certain tendencies in the sphere of public education in the States; I am opposed to the tendency by which the public school is made to do things that parents ought to do, such as providing moral instruction and the like.”

His insistence on limited government as a means to preserving freedom also had a practical element to it in this regard. Folks were saying it would be more efficient to turn education over to the State. Machen demurred: “As a matter of fact, Federal departments are not efficient, but probably the most inefficient things on the face of this planet.” Ronald Reagan or Margaret Thatcher could not have said it better.

Machen even appeared before Congress during the same year to speak against this. He told the Washington committee that this had been long proposed, from as far back as Plato’s Republic. And it has been tried, with disastrous results, in places like Soviet Russia.

He said, “I do not believe that the personal, free, individual character of education can be preserved when you have a Federal department laying down standards of education which become more or less mandatory to the whole country.”

Finally, let me offer a few quotes from his 1934 essay, “The Christian School: The Hope of America.” He asks, “What has Christianity to do with education?” He notes how important the biblical worldview is for every believer:

Many more such important quotes could be presented from this volume. Suffice it to say that Machen was well ahead of the masses in seeing the dangers of mass State education, and the diminution of alternatives, primarily, Christian schools. We are seeing all this being played out right now.

As mentioned, this in large measure explains why home-schooling has become such an alluring option for so many. Because most folks – including most Christians – did not heed the warnings of Machen and others like his, we are now paying the price for a statist education which increasingly is at odds with all that we hold near and dear.

It is a pity his prophetic warnings and exhortations went unheeded.

10 Replies to “Machen, Education and the State”