Millions of Western Christians are fully focused on living the good life and getting more stuff. Their chief goal and driving passion seems to be bigger homes, more cars, even more European vacations, a terrific self-image, and a problem-free life. They are fully focused on self.

But it is not this way with many other believers. Countless Christians around the world have their focus squarely on Christ, and because of that they are paying a horrific price. Relentless persecution of Christians is raging throughout much of the world, yet most Western Christians either know nothing about it, or do not give a rip about it.

They are too busy seeking to have their best life now. And the biggest churches in the West are those which tell believers just what they want (but not what they need to hear). They are promising them a life of ease, riches, splendour, happiness, self-fulfilment, and having it all. 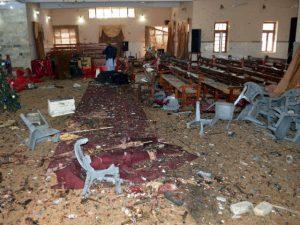 It is as if we have two completely different gospels being preached. In so much of the West it is a gospel of self – a damnable, heretical false gospel which is devoted exclusively to me, me, me. But the real gospel is focused on Jesus, and is all about self-denial, self-abnegation, and serving God and others.

The two gospels could not be any more different. The former gospel is even loved by the world. And these false teachers actually boast about how many non-Christians happily attend their churches and listen to their sermons. And why not? Promises of wealth and happiness and complete self-fulfilment is what most folks covet.

But the real gospel always raises the hatred and enmity of the world. Non-Christians hate Christ and they hate real Christians. That is why the global war of Christians is found especially in the non-Western world. Real deal Christianity is being practiced in so many of these places, thus real-deal persecution is happening there as well.

While few Christians – if any – are having their churches destroyed or are being burned alive for their faith in the West, it routinely happens elsewhere. Let me look at two recent examples of this, the first in China. One recent report puts it this way:

The Chinese government’s campaign to “Sinicize” organized religion – to make religion completely subordinate to the Communist Party – grew more aggressive this year and featured the destruction of Bibles, crosses, and entire churches. Religious freedom activists call it the worst crackdown on Christianity since religious freedom was nominally granted by the 1982 Chinese constitution.

My other example comes from Africa. Last week we read about a Nigerian pastor and his wife and children who were burned alive by Muslim tribal herdsmen, the Fulanis. One story describes the situation this way:

“The attackers armed with machetes and AK-47 rifles stormed the village at about 8pm on Tuesday [28 August], shooting sporadically and burning houses including part of the reverend’s house,” a source told journalists. Pastor Adamu Jang and his wife died, along with their three children.

At least eight people were killed and churches and houses in several villages were set alight. Police later confirmed that 95 houses in Barkin Ladi county were burnt in the attack and that 310 cattle were stolen. A local politician stated “many houses and churches were burnt to ashes”.

On 26 June, 50 Christians were killed in an attack on two other villages in Plateau State by armed Fulani Muslims. The Christian Association of Nigeria estimated in June that attacks by Muslim Fulani herdsmen have claimed the lives of more than 6,000 Christians so far in 2018.
barnabasfund.org/au/news/nigerian-pastor-and-family-burnt-alive-in-fulani-attack

Imagine that: burned alive for your faith. And 6000 killed just this year in one country. Islam is the main religious persecutor of Christians, and Christians are the main group to be persecuted worldwide. We desperately need to get the big picture here on all this.

One helpful resource is a booklet published last year: Johnnie Moore’s 10 Things You Must Know about the Global War on Christianity (Tyndale). Although a very small volume, it is packed with much-needed information and facts. For example, every month according to the lowest estimates:

-322 Christians are killed for their faith;
-214 churches and Christian properties are destroyed; and
-722 acts of violence (such as rape, beatings, forced marriages, arrests, and abductions) are perpetrated against Christians.

He offers us “10 Things You Must Know About the Global War on Christians.” Those following this issue will find some of it familiar, but we need to keep being aware of what is going on with this. Let me just list each chapter heading:

-Christians are the most persecuted religious group on earth – no exaggeration
-More Christians have been killed in the last century than in the previous nineteen combined
-Persecution has several root causes and takes many forms
-Persecution doesn’t usually begin with violence; it begins politically, with marginalisation and discrimination
-Islamic terrorism reaches beyond the Middle East
-Totalitarian regimes remain the chief persecutor of Christians around the world
-Conversion is the most difficult life decision many will ever face
-Christian persecution causes cultural genocide, not just physical genocide
-Persecution does not silence the church
-There are many things we can do to help

Let me briefly quote from two of these. Since I earlier mentioned Nigeria, let me look at the fifth chapter on Islamic terrorism. Says Moore:

According to Open Doors, the six countries where the most Christians have been killed by terrorists recently are all in sub-Saharan Africa. “In numerical terms at least, though not in degree, the persecution of Christians in this region dwarfs what is happening in the Middle East,” one report says. “Many of these Christian deaths in Africa are due to Islamic extremism, which accounted for one-third of the Christians killed worldwide in 2016. [“Others were killed by state and non-state persecution, including in places like North Korea.”]

And his ninth point about persecution not stopping the church is also worth detailing. While we must never minimise the horrors of persecution, nor glibly speak about how good it is for the church to go through it, it nonetheless is the case that often the church grows the most under such difficult times. Moore says this about one such place: China:

According to the Financial Times, there are now at least 100 million Christians in China – more than the 86.7 million members of the Communist Party! That’s an enormous increase from the fewer than 4 million Christians estimated to have been in China when the Communist party took over in 1949. Despite decades of government persecution, the church continues to grow. By 2030, some forecasts suggest that China’s total Christian population could be more than 247 million, more than any other country in the world. Purdue University professor Fenggang Yang says, “Mao [Zedong] thought he could eliminate religion. He thought he had accomplished this. . . . They actually failed completely.”

The sad truth is, all over the West the church IS declining and withering on the vine. This is mainly due to carnality, compromise, worldliness, and false gospels being tolerated everywhere, and not by direct persecution. While Western Christians seek to live the good life and be liked and accepted by the world, their growth and influence is in steep decline.

But elsewhere, Christians are seeking to please only one – their Lord and Master, and as a result, they are being persecuted ferociously. They would rather lose everything, and even face torture and death, than deny their Lord or settle for ‘cheap grace’ and a comfortable Christianity.

It is not hard to tell who the real Christians are, and who are just mere fakes.

(Moore’s book is available in Australia at Koorong: www.koorong.com/search/product/the-global-war-on-christianity-johnnie-moore/9781496419545.jhtml )

5 Replies to “Persecution: Will the Real Christians Please Stand Up”