Sometimes it can take me a little while to figure out what I should write about on CultureWatch. I do try to have at least one new article written and posted every day. Usually there is plenty of new news that can be turned into an article, or stuff gleaned from my morning devotionals, or general culture war material, etc.

However, once in a while I may have to think a few hours as to what might be worth running with. But not today. As soon as I tried to open my Facebook page this morning I knew instantly what to write about. You see, here I am, languishing in Facebook jail – once again.

Yep, sitting in jail, twiddling my thumbs, wondering what to do – for an entire 30 days! Sure, I have done my time in the past with shorter stints in the sin bin – a day, or two or three. Various “transgressions” have meant that the FB censors had to act it seems. 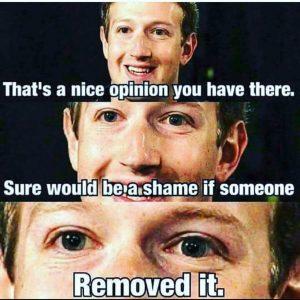 But an entire month – really? Wow, what did Bill do that was so despicable? Threaten to assassinate a top political leader? Post pictures with raw, degrading pornographic content? Try to defend the most wicked forms of child abuse? Try to tell deliberate and flagrant lies with impunity?

Um no – evidently it was far, far worse than that. But the really bizarre thing is, it seems NOT to have been a post by me at all. Although it seems to have been someone else’s, I don’t even know what they posted. I only briefly saw a quick image of it, and it was not anything I did. So I am completely kept in the dark by the FB overlords, and have been given the boot, with zero recourse of action or right of reply.

Let me make this clear. Here is the bottom line in this case: someone else can post something FB does not like, and do it on a page that is not your own, yet you can STILL get slammed by FB anyway – even for a whole month. That makes as much sense as sharing a flat with a guy who robs a bank and gets caught. Because you happen to share accommodation with him, you too will be jailed.

That’s it. Just like the KGB operated. Just like how the Stasi used to work. The knock on the door at midnight. Carried away into a van in the dark, never to be heard from again. While folks suffered far worse under the Communists and the Nazis of course, the basic principles are not all that different.

You WILL do as the masters say, or you will pay the price. Forget about outdated concepts such as free speech, freedom of thought, and the democratic right to have differing points of view. All that is verboten in the People’s Republik of Facebook.

And by the way, it is not particularly difficult to get sinbinned by FB. It is a piece of cake in fact. Sometimes some of my FB friends complain – half-jokingly – that they have never faced the wrath of Zuckerberg and his thought police. They have never been banned or blocked – or even warned.

I tell them they need to lift their game! One simply has to share truth on FB and that is usually sufficient reason for the FB fascists to leap into action and treat you like a war criminal – or worse. Just dare to say anything critical of Islam, or homosexuality, or the new trans revolution for example, and you will be noticed by the FB thought monitors.

And the bizarre thing is, in this case, you need not have posted anything! Simply have even a loose association with someone else or some other FB group, and if the Brownshirts at FB do not like their posts, you too will be given the boot – in this case the jackboots of the hate speech armies employed to do Zuckerberg’s bidding.

For those wanting a few more details on this, it seems it was absolutely nothing I wrote or posted. It seems to have been on some other FB page. And I did not even get to see clearly what this horribly offensive post was all about. Someone else posted, and I am found guilty by association.

It seems that the latest fracas was due to something posted by someone else on the ‘Its Official’ website which I think is about safe schools and the like. As is often the case, folks seem to make me an admin for their page. It is not as if I am asked, or have asked myself to be an admin, quite often.

Life is busy enough as is. But it can be handy in some cases to be made an admin if it means I can occasionally post something directly on other FB group pages. So if my memory serves me right, I may have posted a handful of times on this particular site. Otherwise I have nothing at all to do with it.

There are of course many other alternatives to FB. Various social media sites exist, and they seem to be growing – slowly but surely. A while ago for example I joined MeWe. I also managed to take around 300 FBers with me. Many of us have accounts on both sites as yet, but it simply gets worse each passing day with FB, so a backup is needed.

FB is constantly blocking and banning conservative and Christian content. So if we keep getting lengthy jail terms, it makes no sense to remain with them. If they despise us all so much and don’t want our business, then fine, we can take it elsewhere.

So far MeWe has censored nothing of mine, nor has it banned me nor blocked me. It seems to actually believe in the fundamental right of free speech, unlike FascistBook. And all this is not just a case of sour grapes on my part. I have lost count of the number of friends who also have been treated like criminals by FB, all because they dare to share non-PC truth.

Good, decent people who do not use vile language nor resort to incendiary rhetoric nor urge any violence – they all have been banned by the FB censors, often for the most innocuous stuff. By refusing to bow down to the secular left narrative, they are routinely hassled and hunted down by the FB thought police.

Um, who needs this baloney? This is getting to be beyond a joke, and it gets worse as time goes by. Way back in 2010 we had this frightening headline to contend with: “Facebook Teams Up with Gay Activist Orgs to Stop ‘Hateful’ Comments”.

Indeed, I have been documenting the many ugly cases of Facebook censorship for years now. Here are just four articles on all this:

It is high time for a change. Please explore other social media platforms. If you want to join me on MeWe it is easy enough to get on board and share things without fear of the thought police. Just sign up here: mewe.com/

As they say in their “About” page:

It’s your show. Share your world online your way, by your rules.
You own your content. You control your interactions. You design your level of privacy.
MeWe is where you can be authentic and uncensored, the way you are in your real life.
MeWe challenges the status quo by making privacy the foundation of online social experiences.
MeWe keeps your information free from tracking, spying, and scraping.
Share content only with those you wish to see it. It’s your online life, with privacy, safety, and simplicity.

See you there. Otherwise, I might see you in a month on PCbook.