Beginning in the early 1980s, various political groups on the left, assisted by many religious groups on the left, started ignoring and resisting American immigration laws, viewing them as being immoral and discriminatory to Central Americans. They felt US laws had to be violated in order to help Central Americans seeking to flee their countries for various reasons and settle in America.

That movement continues today. These folks seek to harbour and aid illegal aliens residing in the US, or those trying to get here. Thus they are also involved in the transporting of these folks, seeking to bring them into the country in any way they can. Breaking the law is a big part of this as they seek to bypass normal immigration policies.

We now have over 200 “sanctuary cities” and many “sanctuary states” which are effectively resisting federal laws on these matters. And it should be pointed out that Western Europe is now seeing this occur, and even Australia is hopping on board. See this piece as one example of this: www.adelaidenow.com.au/news/adelaides-pilgrim-uniting-church-prepared-to-risk-jail-for-providing-sanctuary-to-asylum-seekers-facing-deportation-to-nauru-after-high-court-decision/news-story/b3f8b5512a7e23090743050241349136 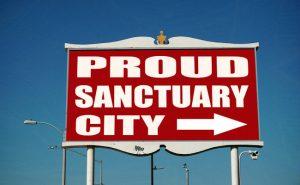 The history and politics of this movement can be found elsewhere. Here I want to focus not on all the ins and outs of the particular laws and legislation in question. As I have said in other articles, all sides on the political spectrum realise that some major reforms of American immigration law are in order.

But my emphasis will be on the religious arguments being made to justify what is usually illegal activity, all in the name of compassion for these folks wanting out of their home countries. In the 1980s there were hundreds of American churches involved in this, and today there would be many more.

The main set of biblical texts that they appeal to have to do with the cities of refuge. Old Testament law on this is found in places like Exodus 21:12-14; Deuteronomy 4:41-43; 19:1-13; and Joshua 20:1-9. These passages speak about appointed places where people could flee to if they were involved in the accidental death of another person.

Six of the 48 Levitical cities were set aside for this purpose: Kedesh, Shechem, Hebron, Bezer, Ramoth, and Golan (Josh. 20:7-8). There were three of them located on either side of the Jordan river. Thus those in need of such cities did not have to travel too far to get to them.

Numbers 35:6-34 is the lengthiest passage on this matter. Verse 12 offers the rationale for these cities: “The cities shall be for you a refuge from the avenger, that the manslayer may not die until he stands before the congregation for judgment.” It is a safe place, a place to harbour these people, until proper adjudication can take place regarding the incident.

At least four things must be said about them and how they so sharply contrast to modern sanctuary cities. First, as just mentioned, their main purpose was to harbour those involved in the death of another. That makes the purpose of the OT cities far different from that of today, where economic migrants seeking a better life, or fleeing politically unstable nations, comprise the great bulk of the people heading north to America.

Second, as N. H. Ridderbos puts it, their main purpose was to “prevent excesses which might develop from the execution of what is usually called ‘blood-feud’.” In his commentary on Deuteronomy J. G. McConville explains: “In essence, they provide a place of escape for the accidental homicide, who is subject to the tribal custom of blood vengeance, which might be exacted before a proper trial can determine whether the killing was intentional.”

Trent Butler, commenting on the Joshua passage, puts it this way:

The law is an attempt to adapt tribal, nomadic practices to the new sociological realities of urban life. The old practices still hang on. Blood revenge cannot be ignored. It stands as a threat to the life of the community. On the other hand, killing cannot be dismissed or handled lightly. The newly urbanised society must find a way to deal with both sides of the problem. The city of refuge seeks to find a middle ground for dealing with that problem.

Third, we only have two passages in which we seem to see something like this actually occurring. One has to do with Adonijah as found in 1 Kings 1:50-53, and the other with Joab in 2:28-34. So we seem to have little historical record of their use.

Fourth, and perhaps most important, the OT cities of refugee were a divinely-ordained means to deal with a particular problem for ancient Israel. As such it was of course fully legal, legitimate, and morally defensible. In marked contrast, the American sanctuary movement is overwhelmingly about defying the law and breaking the law. Those involved even proudly urge others to break the law as well.

They claim that US immigration law is unjust and immoral, and therefore it must be broken with impunity. That is certainly not a biblical view of law, which tells us to submit to government authorities (See Romans 13:1-7). Christians urging this are clearly at variance with what Scripture teaches.

Sure, on certain occasion there might be a place for things like civil disobedience, coupled with a willingness to accept the consequences of such defiance, but that is the exception, not the norm. See here for much more detail on this: billmuehlenberg.com/2008/11/02/christians-and-civil-disobedience/

More can be said about modern sanctuary cities, but let me offer some concluding remarks by a few others. I have often appealed to an excellent book on all these matters in the past, and it is well worth doing so again. James Hoffmeier’s important book has plenty of sound and incisive things to say about this issue.

In The Immigration Crisis: Immigrants, Aliens, and the Bible (Crossway 2009), he looks closely at the OT towns of refuge. After examining them in some detail, he says this:

From the foregoing review of the biblical laws and passages that deal with the practice of sanctuary in ancient Israel, it is clear that its purpose was limited to offenders who had accidently or unintentionally killed someone, thereby providing a place where their case can be heard. Sanctuary was never intended as a place to avoid the law but to allow the law to take its proper course rather than retaliation when it was not called for. While both Israelite citizens and aliens qualified for sanctuary (cf. Num. 35;15 and Josh. 20:9), being an illegal alien was not a criterion for such protection. Consequently, American cities and churches who offer sanctuary for illegal immigrants cannot claim to be following the practice described in the Bible. Rather they are twisting biblical statutes and subverting federal law.

And in the concluding chapter of his book he offers these words:

The only modern application of the biblical practice of sanctuary is to be sure that an offender gets a fair hearing before an impartial court, and a change of venue should be extended to a defendant if a fair trial cannot be assured. Indeed, in the American legal system a defendant can request a change of venue, a request that is often heeded by the court.

Cities and municipalities who offer sanctuary for illegal aliens do so without the support of biblical law. Because biblical sanctuary was only intended to allow the innocent party to get a fair hearing in trial, and not for the purpose of sheltering lawbreakers from the authorities and agents of the state, cities that provide a safe haven for illegal immigrants, well intending to be a gesture of justice, are in fact violating federal law and are misappropriating biblical law.

But the religious left is not always known for being biblically faithful. It usually prefers to selectively use Scripture to push a particular political agenda. If that means twisting the Word of God to do so, they seem to have no problem with that.

Back in 1985 when the sanctuary movement had only been around for a few years, the Institute for Religion and Democracy issued a report on this. In the article they wrote:

The danger and the sadness of the Sanctuary Movement is that it politically exploits the compassion of thousands of church people, debases the meaning of religious freedom, imperils the well-being of hundreds of thousands of aliens already in this country, precludes serious public debate about a more just immigration policy, and invites a popular backlash against America’s tradition of generosity to refugees. And all this in the name of “solidarity” with the poor and oppressed.

Finally, a much more recent word from Rod Dreher on the caravan now heading north:

The Bible tells Christians to love their neighbors as they love themselves. But who is their neighbor? The man next door? Yes. The people who live across town? Surely. Those who live in another part of their country? Okay. People from another country who want to settle in their country? Erm… . If everybody is your neighbor, then nobody is.

And what about if that settlement threatens to injure the interests of one’s own countrymen? That is, what if one’s charity to the foreigner takes away jobs from one’s neighbors who already live here? Where is the virtue of taking from the neighbor you already have to give to the one with whom you have no bonds? If you let the 7,000 in, on what grounds do you turn away the 7,001st? These are important questions.
www.theamericanconservative.com/dreher/how-not-to-think-about-the-caravan/

Yep, they sure are.

7 Replies to “On the Sanctuary Movement”