It is now official: reality does NOT exist. Progressive Westerners early in the 21st Century have decided this is the case – and that is the end of the matter. There is now no such thing as reality. There is only what I want things to be. End of story. If you don’t like that, you are a narrow-minded and hate-filled bigot.

If life on planet earth should continue, one day we will look back at this time in the West’s history as the darkest, most bizarre, and most insane period ever. Normal people will look back and wonder what they were putting in the drinking water. But whether the West survives that long is an open question. 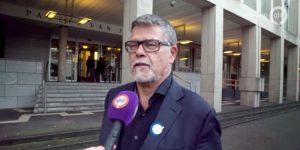 Consider the latest case of trans madness. Now we have an old man who is legally challenging his age. I kid you not, and it may not be surprising that this bizarre case comes from the Netherlands. Here is how one news item runs with this story:

A pensioner has begun a legal battle to be recognised as being 20 years younger than his actual age so he can go back to work and achieve greater success with women on Tinder. Emile Ratelband, 69, argues that if transgender people are allowed to change sex, he should be allowed to change his date of birth because doctors said he has the body of a 45-year-old.

The entrepreneur and self-help guru is suing his local authority after they refused to amend his age on official documents. Mr Ratelband’s case has now gone to a court in the city of Arnhmen in the eastern Dutch province of Gelderland. The case has caused controversy in his homeland, with the Dutch edition of Vice, a news website, asking, “Is Emile Ratelband disturbed or accidentally extremely woke?”

Mr Ratelband was born on 11th March 1949, but says he feels at least 20 years younger and wants to change his birth date to 11th March 1969. Mr Ratelband said: “I have done a check-up and what does it show? My biological age is 45 years. “When I’m 69, I am limited. If I’m 49, then I can buy a new house, drive a different car. I can take up more work. When I’m on Tinder and it say I’m 69, I don’t get an answer. When I’m 49, with the face I have, I will be in a luxurious position.”
www.telegraph.co.uk/news/2018/11/07/dutch-man-69-identifies-20-years-younger-launches-legal-battle/?WT.mc_id=tmg_share_fb&fbclid=IwAR1GT3ghGobP3XKBQbLhAfiMTK_4OA_2x_P4otyPKawTeMhBpbBnX-UBYpg

The only other thing more scary than all this is the fact that a Dutch court is actually hearing the matter. As it says in the article, “The court is due to deliver a written ruling within four weeks.” Hmm, why do I suspect the court may actually go along with this guy?

But hey, who am I to judge? I have long identified as an ageless can of Dr Pepper. And who are you to judge how and what I self-identify as? As Mark Stein said about the Dutch case, ‘We’ve basically repealed the facts of life. So why not repeal your age? It would solve the pension crisis overnight as well.’

David Robertson has been on the same page with me on these issues for quite some time now, and his comments on the trans-age case reflect my own:

I have great news for you. Many of you have been under the false impression that I am a 56 year old Scottish minister with not much hair. This is just not true and I feel I should sue you for hate crime. I am in fact 36 with a full head of hair and I would like to identify as Chinese. I know you think this is a joke – but in a world where we can identify as whatever we want – in a world where a man who is born with XY chromosomes, has male genitalia and a male body can simply say he is a woman – against all the evidence (according to the UK and Scottish Governments)…why shouldn’t someone be allowed to identify as whatever age they like?
theweeflea.com/2018/11/08/the-real-rip-van-winkle-a-self-identity-too-far/

Yep, the loony trans-reality activists can say whatever they want, and we are all expected to just sit back and stay mum. Indeed, we are expected to applaud, support and celebrate whatever lunacy they come up with, and if we do not, we are obviously intolerant dinosaurs who are impeding progress and displaying our hate.

Of course none of this is new. We have had plenty of cases of folks claiming they are something they are not – even in terms of age. Three years ago I wrote about a Canadian man who caused a bit of a stir. One of the headlines went like this: “’I’ve gone back to being a child’: Husband and father-of-seven, 52, leaves his wife and kids to live as a transgender SIX-YEAR-OLD girl named Stefonknee”.

I discussed that moonbattery at the time here: billmuehlenberg.com/2015/12/15/when-folks-identify-as-brainless-nincompoops/

And when our major institutions, governments and businesses fully hop on board all this insanity, then you know the West is just about a goner. Consider this news item just in concerning one of Australia’s major banks:

Westpac employees will have access to up to four weeks of paid leave and a year of unpaid leave to make a gender transition under a new wages and conditions agreement. The new enterprise bargaining agreement also doubles paid parental leave from 10 to 20 weeks. Aboriginal and Torres Strait Islander employees will be given access to three days for “Sorry Business”.

Compassionate leave has been increased to three days per occasion and a 3.25 per cent pay rise will be given to employees that earn up to $82,500. Finance Sector Union national assistant secretary Nathan Rees said Westpac was the first bank to have introduced transgender leave as far as he was aware. “It is a positive step,” he said.
www.canberratimes.com.au/business/workplace/westpac-employees-to-get-transgender-leave-20181108-p50eub.html?fbclid=IwAR2g35bAlJPrqLO1XR7K8eJfeVUqpFw2oz0D2kSIQz0_laMoQ34jut05qcs

Oh good grief. Hey Westpac, I got news for you: I identify as a multimillionaire who has stacks of cash in your bank. And I am coming to claim my loot. I am sure you will fully and happily accommodate me on all this. If not, I will out you for your ugly bigotry and hate.

Thanks Westpac – you made my day. So nice of you to cater to my self-identification. Oh, and I also identify as the CEO of Westpac, so in addition to claiming all my moolah, I also expect that you will cough up my salary from the past ten years as well.

Isn’t it great to identify as you will? It sure beats the repressive confines of boring and bigoted reality.

20 Replies to “I Identify As… Whatever”