Two events that took place in Melbourne this afternoon make for a very real and marked contrast. The first has to do with Islamic terrorism again striking horror on our city streets. As I type this, blood is still to be cleaned up, and citizens are still reeling. 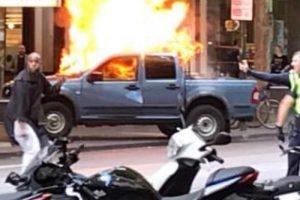 Yet another terror attack in Melbourne, again on Bourke Street. This is what we now know: A Somali man who had been known to ASIO and had known links to radical terror groups went on a killing spree late this afternoon in Melbourne’s central business district.

After his four-wheel drive was set alight on the street, he got out and started stabbing innocent bystanders. There were gas cylinders in his vehicle, which explained the various explosions. One person died from his knife wounds, and two others were wounded and are now in hospital.

Like so many others, I am closely following various updates on this. Here are some more recent developments. Police had opened fire on the attacker and he is now reported to have died in hospital. He received one or two shots to the chest.

As usual the media and the authorities are telling us they have no idea what his motive might be. Police at first had been saying this is not a terrorist attack! But a Muslim targeting infidels – well, that sounds like the religion of peace at work to me.

Indeed, the Age just reported this: “Police have been told by witnesses that the man was yelling ‘Allahu Akbar’ at some stage.”

At the beginning of 2017 we had another attack in the Melbourne CBD, that one resulting in more deaths. The man involved also had Islamic connections but the authorities tried to minimise any such involvement. I wrote it up here: billmuehlenberg.com/2017/01/22/melbourne-muslim-terror-attack/

And in December of 2017 we had another such attack, and more attempts to downplay any Islamic involvement: billmuehlenberg.com/2017/12/21/terrorism-in-melbourne-once-again/

Bear in mind that since September 11, 2001 we have had well over 38,000 deadly Islamic terror attacks around the world. In October there were over 150 such attacks resulting in almost 800 deaths. www.thereligionofpeace.com/

But I mentioned that another incident took place, but this one involving life. Conjoined twins who had been in Melbourne for some weeks now were operated on this afternoon and successfully separated. One news report provides these details:

Conjoined twins Nima and Dawa have been successfully separated after surgery in Melbourne’s Royal Children’s Hospital today. The head of paediatric surgery Dr Joe Crameri said it took two hours before the two girls from Bhutan could enter surgery.

About 18 medical staff, including doctors, nurses and anaesthetists, tended to the two 15-month-old girls during the six-hour surgery, where their shared organs had to be disentangled. He said the surgery had been successful, despite having to manage the expectations of the family and the public going in.

There you have it: great news in one Melbourne hospital but terrible news in other hospitals. In one place we have people working to preserve life, while on the city streets not far away some were seeking to take life in a most horrific fashion.

It is still early days yet as to the terror attack. I will post this article now, and add updates and supplements to it as they come to hand. Please pray for the twins, and pray for the victims, their families and their friends.

Perth law professor Augusto Zimmermann just released this statement which I am happy to share:

A CALL FOR MUSLIM IMMIGRATION BAN IN AUSTRALIA

At least one person has been killed, and another two injured, after a Muslim terrorist went on a stabbing frenzy in Bourke Street, Melbourne, this afternoon.

The past four successful terrorist attacks on Australia’s soil have all been carried out by Muslim terrorists, some of them who successfully applied for refugee status before the Australian authorities. For instance, Islamic State’s most influential recruiter in Australia, Muhammad Ali Baryalei, is a Muslim refugee that the government allowed to stay in the country.

Australia has a population of approximately 24 million and around 500,000 of its people are Muslims. The number of Muslims has risen dramatically over the last thirty years. Over 300,000 of them use Arabic at home.

Needless to say, most Muslims are not terrorists but, unfortunately, all terrorists consider themselves to be faithful Muslims. While security measures are not specifically directed against the broader Muslim community, terrorists are, of course, drawn exclusively from this specific religious group.

The problem is that we simply do not know who to trust amongst a religious group that largely despises our democracy, culture and laws, and that do not even accept the principle of religious tolerance and separation of powers.

Although jihadists are not drawn exclusively from the first-generation Muslim immigrants, a large Muslim immigration to Australia invariably provides a larger recruiting ground for terrorists and other Islamist militants. Both the influx of asylum seekers from dysfunctional majority-Muslim countries and the constant influx of Muslim immigrants to Australia naturally exacerbate the threat of Islamic terrorism on our soil.

Curiously, however, the last electoral federal campaign coincided with a string of terror raids and major overseas terrorist attacks across the globe. At no point did our then Prime Minister, Malcolm Turnbull, use his authority to make the case to fight against radical Islam.

Instead, our previous Prime Minister constantly expressed his utmost admiration for the Islamic religion. He would never utter the terms ‘Islam’ and ‘terrorism’ in the same breath, probably because he believes that Islam is not the source of the problem and that criticising the more troubling aspects of the Muslim religion can make the country less safe.

Here it is worth recalling the words of Sir Harry Gibbs, former Chief Justice of the High Court of Australia: “While it would be grossly offensive to modern standards for a state to discriminate against any of its own citizens on the grounds of race, a state is entitled to prevent the immigration of persons whose culture is such that they are unlikely readily to integrate into society, or at least to ensure that persons of that kind do not enter the country in such numbers that they will be likely to form a distinct and alien section of society, with the resulting problems that we have seen in the United Kingdom”.

I wholeheartedly agree with Sir Harry Gibbs. Indeed, if it becomes less and less likely that the actions of this faction within the Muslim community can hardly be prevented, then the most effective way to protect the basic rights of our people and reduce the risk of further terrorist attack is by tightening Australia’s immigration policy, which involves reducing (even to the point of virtually halting) any further inflow of Muslim migrants to this country.

12 Replies to “Life and Death in Melbourne”