You will note that I used both the “M” word and the “T” word in my title – something that almost all of our authorities, leaders, politicians and police still refuse to do. As I said in my first piece on this horrible attack two days ago, there was plenty of evidence to suggest that Dimitrious Gargasoulas who drove his car into a crowd of people was a Muslim.

Before proceeding, let me point out the latest tragic news about this attack: we now have a fifth victim: a three-month-old baby. There may well be more deaths in the coming days due to this deliberate and atrocious attack on innocent men, women and children in a busy Melbourne shopping area. We need to keep the grieving families and loved ones in our prayers. 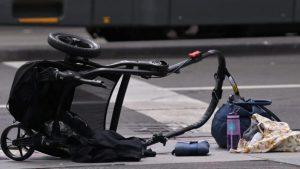 Since the initial attack on Friday afternoon there is even more evidence about who this guy is and what he believes. But from day one I and others were already compiling the growing list of indications of Islam at work. Those included:

-the allegation that he shouted “Allahu Akhbar” as he was wildly driving his car
-his burning of a Bible just before the attack
-his own claim on his own FB page where he said: “I am actually greek islamic Kurdish”
-his rants on his FB pages about he and God dealing with the “dogs” – dogs of course are considered to be unclean in Islam, and the term is often used of the infidels
-his deliberate targeting of people with a vehicle, a by now quite common and bloody MO of IS

Yet for simply offering this data and asking relevant questions, I and others were attacked mercilessly. We were accused of being Islamophobic, of being fear-mongers, of stirring up trouble, of stereotyping people, etc, etc. And on top of this, the police had insisted almost immediately after the attack that this had nothing to do with terrorism.

In my first article I asked why this so often seems to be the case. All the evidence seems to indicate an act of terror, and an Islamic act of terror at that, yet the authorities insist from the very outset that this just cannot be the case. Why the desire to protect one political ideology, even though it puts so many people at risk?

And since my first report, we are now learning even more about the attacker. As one news report states:

Dimitrious Gargasoulas, 26, ranted about the Illuminati, called unbelievers ‘dogs’, and vowed to ‘have god’s laws re-instated’ in the weeks before the attack that killed four people. ‘I declare war on tyranny today, you dogs will have the option to either believe in me and his positive energy he offers and stay faithful to me or serve the one who enslaves you at his feet,’ he wrote on Facebook on Monday.
‘I offer freedom no work no bills just that we all keep faith and believe in the one god, the one higher being for the good and protect the energy that he gives with your heart. God bless everyone in the world it is about to change xoxo.’
He claimed to be ‘Greek Islamic Kurdish’ and a follower of Yazdanism, the native religion of the Kurds before the arrival of Islam, also know as the ‘cult of Angels’. ‘I know exactly how to take you DOGS down the power of knowing has revealed and I shall have GODS laws re-instated,’ he wrote last Saturday.

But one of the clearest pieces of evidence now comes from a close friend of his. The article continues:

A close friend said Gargasoulas’ rantings were driven by heavy use of the drug ice, and that he had recently converted to Islam. ‘He was a great guy but ice destroyed him. Then he converted to Muslim and changed very quickly. For over a month he’s been on edge,’ he told Daily Mail Australia.

There you have it. Unless his close friend is a liar, or the media is just making this claim up out of thin air, we now have the smoking gun: he was a convert to Islam and this helped to push him over the edge. It is not the only factor of course, but as his close friend said, it was a significant factor indeed.

Undoubtedly we will learn even more about this guy in the upcoming days, and learn more about the Islam connection. In the meantime, I wonder if any of my critics will now relent and repent. For two days I have been attacked and hated on by all sorts of people for suggesting that the car terrorist may have been a Muslim.

Now we know that he was indeed a convert to Islam, and he had declared war on the infidels. So will any of my critics be apologising to me? Will they admit that they got things wrong in their zeal to defend Islam at all costs? I won’t be holding my breath on this.

They are both dangerous drugs. Neither should ever be given a free run in the West, and both need to be closely examined, monitored and assessed for the harm that they may cause. Not all Muslims are terrorists, but almost all of the terror attacks around the world over the past few decades have been committed by Muslims.

Our leaders, politicians and security forces need to decide whose side they are on here. Is the defence and protection of innocent citizens their top priority, or is a politically correct and dangerous fixation on exonerating Islam at all costs their number one priority?

I think many ordinary Australians and Westerners already know the answer to that question.

Oh, and one final thought here:

After a growing amount of evidence to the contrary, the dhimmi dunces are still saying this about the Melbourne car terrorist: “It is absolutely certain this had nothing to do with Islam”.
What would these folks say:
-If a guy killed five people while shouting “Praise Jesus”, as countless others had done;
-If he burned a Koran just before the attack;
-If he claimed to be Christian;
-If his close friend said he was a recent convert to Christianity;
-If he spoke about killing non-Christians, etc.
They sure would not make every excuse in the book for him. If a Christian did this with only a fraction of the evidence, he would be considered to be guilty as charged by these folks. I sure tire of the double standards here.

45 Replies to “More on the Melbourne Muslim Terror Attack”