By now most people know that a 26-year-old man ran down innocent men, women and children with a car in downtown Melbourne. The only thing more shocking than this is the refusal by the authorities – once again – to admit to anything that might have to do with Islam or terrorism.

It is still early days yet but some of the facts of the attack are by now well known. There are around 20 injured and now four dead, with a baby fighting for life. However, the police keep insisting that this had absolutely nothing to do with terrorism. While we would like to hope that they are right, there are already some bits of evidence to suggest this may not be the case.

The man is James “Jimmy” Gargasoulas from the Melbourne suburb of Windsor. His FB page is still up under the name of Dimitrious Gargasoulas. It is not a very edifying page to look at, although it does speak about various things, including God. But from scanty news reports coming in, we know a few more things about him:

-At least one witness, an Italian man called Stefano, said he heard him saying “Allahu Akbar”. A video of Stefano saying this was put on twitter, but the woman (a Herald Sun journalist) who put it there said she was told by police to take it down. She said: “Police have asked me take down this video of man speaking to journos at scene. They’re concerned it makes ppl believe it was a terror event.” No terror involved?

-Various reports have noted what a violent fellow he is, and how he just recently burned a Bible. Hmmm, interesting. As one report says: “Mr Wilson said Mr Gargasoulas was a “nice kid”, but on Wednesday night he became violent. He said he came into his flat with a Bible, sat down and started burning it before throwing the burning book into his face.” So no religious motivation?

-On his own FB page he said this of himself: “I am actually greek islamic kurdish”. Nothing to do with Islam? Even when he admits to being Islamic? 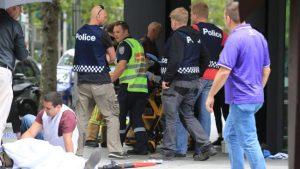 As I mentioned, the attack is only about seven hours old at the time of this writing. He may have just been a very disturbed young man, without an ounce of religious motivation. That is always possible I guess. But I find it worrying that the authorities always seem to rush to deny any involvement with Islam or terrorism in so many of these incidents.

Yes sometimes there is no such involvement. But why do I and so many others suspect that you could have a guy by the name of Muhammad waving an IS flag, shouting “Allahu Akbar” during a major act of mayhem, and the authorities would still want to assure us it was not related to Islam or terrorism?

There has been a sad habit of things like this occurring here and elsewhere in the West. Recall the recent van firebomb attack in the nation’s capital. Very soon after the Canberra ACL van terror attack the authorities assured us it had nothing to do with terrorism. It has been crickets chirping ever since as to what was the motivation then.

Very soon after the Melbourne car terror attack the authorities assured us it had nothing to do with terrorism. Why are they, or how are they so very quick to tell us these things? As mentioned, not every shocking incident like this is Islam-related. But far too many are.

Since September 11, 2001 there have been 30,162 deadly Islamic terrorist attacks. But in the West our leaders and authorities bend over backwards to get us to believe that the “I” word and “T” word have no bearing on most of these attacks.

We will have to wait and see what the police say in the days ahead about Mr Gargasoulas. But sometimes it is what they do not say about folks like this that makes us all a bit worried. When political correctness or fear of offending certain minority groups puts us all at risk, then it is time to stop the PC nonsense and get back to protecting innocent men, women and children.

33 Replies to “Terrorism in Melbourne, Again”