Anyone who has read the many dozens of posts on the US presidential elections I have penned over the past year should know full well my thoughts on Trump and the future of America. So there is not much to be said here. Indeed, this could be my shortest article ever if I simply started and concluded with these words:

I think those 85 words not only fully sum up my thoughts on all this, but they should be a good assessment which hopefully many other conservatives and Christians could run with. But now that the inauguration is underway, a few more things can be said. 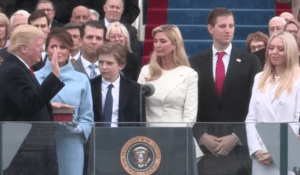 One obvious point is that instead of uniting America, eight years of Obama may have done more to divide the nation than perhaps anything else. Americans today are really at each other’s throats, and we are witnessing a new civil war erupting. The protests and demos during the weekend is simply one indication of this, as is the no-show of seventy House Democrats for the inauguration.

BTW, we often speak about the rent-a-crowds that show up for these kinds of things. Well, that certainly has been the case here, with heaps of money flooding in so that we can have paid protestors roll up and cause maximum havoc. See there two helpful links for all the shameful details:
pamelageller.com/2017/01/left-wing-paying-people-huge-amounts-protest-trump.html/ www.christianvoice.org.uk/index.php/who-is-behind-trump-inauguration-disruption/

As Ann Coulter tweeted: “Left offering ppl $2500 to protest Trump’s inaugural. So liberals are resorting to capitalism to protest capitalism.” Yep, that’s about it.

Another point is that Americans in general and far too many Christians in particular put far too much faith and hope in a new political regime, be it Democrat or Republican. After many decades now of watching American elections and changes of office, I have come to see that often there is not much of substance that can be or is changed.

Related to this is the rather sad fact that we witnessed as much brainless gushing over the new Prez as we did with Obama. Countless crazed fans were swooning over Trump’s every word, fully expecting him to actually be able to do everything he promised. I thought wild-eyed fanaticism was mainly the domain of the loony left.

Indeed, while this sycophantic idol worship is expected of secular lefties with someone like Obama, it is all rather off-putting to behold when done by conservative Christians with someone like Trump. Watching Fox News on Trump recently seems identical to watching CNN on Obama eight and four years ago. The same hero worship and ballooned belief that this new POTUS will somehow come in like the messiah and make everything great again is a mark of delusion, not rationality.

Even in the last 24 hours I heard so many of his fans say that Trump is Trump and he will not change – as if that were a good thing. But unless he does change – primarily by humbling himself and repenting and getting right with God – this is a bad thing, not a good thing. A person who will not change when change is desperately needed is not someone we should celebrate, adore and promote.

A last point – a point I have made repeatedly now – is that character counts. The foolishness about “we are not electing a pastor” is the stuff a pagan or an unbiblical Christian would regurgitate. There is nothing more vital for any leader than the content of his character.

Note that I did not say a leader has to be a Christian. As I have said time and time again, I would rather have a principled non-believer as a leader than an unprincipled believer. Questions about Trump’s questionable character remain, despite what all his over-zealous fans say. Christians of all people should not minimise or downplay the importance of character.

But plenty of Trump’s supporters will have none of this. This was nowhere more apparent than on Fox News on inauguration eve. For example, one of Trump’s biggest groupies was gushing about how great the man is, and she actually said this: “He is a great family man; I’ve known two of his wives”! I let out a loud laugh at this. But she said all this with a completely straight face, the irony obviously being completely lost on her.

Thankfully plenty of other Christian leaders have also been rightly concerned about such matters. One of them is John Piper who wrote about this just hours ago. Let me share some of the thoughts from his article, “How to Live Under an Unqualified President”.

He repeats the many obvious problems and shortcomings with Trump and his character, and then goes on to speak about some biblical guidelines for leadership. The five he lists (and goes on to elaborate about) are these:

On the last point he says this: “Virtually all the founding fathers agreed that without a virtuous people, the rule of law and of representative self-government will not survive. Donald Trump’s character is not what they had in mind by ‘virtue.’ It is, in significant ways, the opposite, and therefore his example contributes to the undermining of the republic.”

But all this and more I and others have warned about for many months now. At this point we have a new president and a chance for new beginnings. We will have to wait and see how it all pans out. We need to pray for the new POTUS and his team. We need to pray for America.

And we need to pray for American Christians that they rise up during these dark days and become all that they are meant to be for Christ and the Kingdom. While politics is important, politics cannot save anyone. Only Jesus Christ can do that, and we are called to make that good news known far and wide.

20 Replies to “On the 45th President of the United States”