The newest volume in the excellent Pillar New Testament Commentary series is another first-rate effort. The American New Testament professor has already done a very good commentary on 1-3 John (BECNT, 2008). His newest commentary adds to a now rather impressive line-up of Pillar commentaries.

As to the Pastorals, the four most important and substantial commentaries from a basically conservative, evangelical stance over the past few decades have been these: 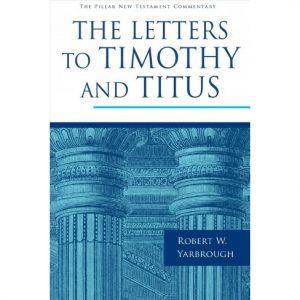 Mention should also be made of two other commentaries. One is the 1999 volume by I. Howard Marshall (with Philip Towner) in the ICC series. It is also 900 pages and looks to be outstanding. But I do not own it (the ICC series is SO expensive), so I cannot comment further on it. Another is the shorter, 300+ page work by Gordon Fee (NIBC, 1984) which can also be added to any list of highly recommended volumes on the Pastorals.

Now we have Yarbrough to join these important works. He provides us with a very workable, informed and detailed examination of the Pastoral Epistles. He spends 95 of his 600 pages on introductory matters. As to authorship, it has become somewhat trendy of late to deny Pauline authorship. Even some conservatives have gone in this direction

Yarbrough offers ten pages on this, and affirms the traditional stance, saying: “For eighteen centuries, Pauline authorship was never doubted by the churches’ intellectual leaders; even in the last two centuries, many have doubted the doubters.”

As to the commentary proper, one tends to first head to well-known, contentious, difficult, or important passages. So let me reflect on a few of these. One of the most hotly debated passages in the Pastorals of course has to do with the matter of women in leadership.

Paul covers this in several places, but the most crucial passage is 1 Timothy 2:11-15. This is certainly a difficult passage in many respects, and one that is hotly debated. The two main camps on this have been the complementarians, who argue that men and women are equal in worth and status, but have differing, hierarchical roles, and the egalitarians, who argue that women can fully serve in church leadership positions.

This debate has been going on for quite some time now. Because all of 1 Tim. 2 must be considered here (dealing as it does with propriety in public worship), Yarbrough has a lengthy general discussion about these issues first. He then devotes another 20 pages to the actual contentious passage. He offers a “qualified complementarian reading” on all this.

Egalitarians may not fully agree, but they should appreciate his careful and gracious exegesis here. And of course he has written on this elsewhere, as in his chapter in the important volume edited by Kostenberger and Schreiner: Women in the Church, 3rd ed. (Crossway, 1995, 2016).

Another issue that can be rather difficult to understand and deal with concerns those who “have suffered shipwreck with regard to the faith. Among them are Hymenaeus and Alexander, whom I have handed over to Satan to be taught not to blaspheme” (1 Tim 1:18-20). Paul says something similar in 1 Cor. 5. Says Yarbrough,

From these two passages it may be inferred that in grave cases of ethical or doctrinal lapse, and perhaps drawing on Job 2:6, Satan was viewed as “God’s agent in judicial administration.” Whereas congregations would normally have prayed for one another, there were evidently cases where petition would shift from divine protection to divine discipline (with Satan as God’s agent). Sometimes harsh measures are required to wake people up (see 2 Thess. 3:10-14).

Since discussions about overseers are found in all three epistles, both Paul and Yarbrough spend much time on the topic. In one of the passages he makes this remark: “In sum, ‘the overseer is to be’ introduces more than a random wish list for the pastorally inclined do-gooder. It points to a quality and depth of godliness that are indiscernible for the magnitude and gravity of pastoral labor that Paul models, expects of Timothy, and hopes to see replicated in generations to come at Ephesus and beyond.”

Two more issues that can be contentious for some is found in 1 Tim. 5:23: “Stop drinking only water, and use a little wine because of your stomach and your frequent illnesses.” Some teetotallers try to argue that this is not actual wine, but watered down grape juice. And some of the health and wealth gospellers insist that no faith-filled believer should ever get sick. Yarbrough gives short shrift to both of these ideas.

Another famous passage dealing with wealth is 1 Tim. 6:6-10 which speaks of false teachers and the love of money. Yarbrough affirms the biblical balance Paul seeks to present here:

Birth and death both illustrate the tenuous relation between life and material goods. Paul wants to relativize (not trivialize or eliminate) the importance of earthly acquisitions, since he observes people tempted to enlist God in their material quest. . . . It is important to note that this is not an adoption of an ideal of Hellenistic philosophy. Nor is it an endorsement of poverty. . . . If God does grant wealth, and if a believer has not sold his or her soul to acquire it, Paul will later give directions for its proper utilization (see on vv. 17-19 below).

As to those verses he says this:

This brief admonition for the sake of the rich is notable for its positive and measured tone. It is a tribute to Paul’s pastoral concern for a subgroup … that it can be tempting either to favour (Jas. 2:1) or to excoriate (Jas. 5:1). Paul does neither; he rather administers to them implications of the gospel message. If Timothy can keep the rich from self-destructing and help them direct their resources in the right directions, it will be a great boost to his goal of remaining at Ephesus (see 1:3).

Other matters could be mentioned here. But all up this is a very competent and usable commentary, one that will stand the test of time. It offers careful exegesis and helpful theological insights. It is a very welcome addition to the Pillar series.

On the PNTC series and Peter O’Brien

The PNTC series really has become one of the premier sets for evangelicals and those who want the best of biblical scholarship and careful exegesis. Of course the New International Commentary on the New Testament series is another outstanding set which is very solid and dependable.

NICNT has been around much longer (it began in the 1950s), and it now has a number of replacement volumes. The PNTC series is much more recent, and it first morphed out of a few commentaries: Leon Morris on Romans (1988) and D. A. Carson on John (1991).

One of the books (on Romans) has had its first replacement volume: Morris’s 1988 commentary was replaced by Colin Kruse in 2012. There are now 18 volumes that have appeared in the PNTC series. However, if you go to the publisher’s page on this set, you will find only 15 books on offer: one was replaced, but two have been discontinued.

Sadly two of the commentaries – and one from another series, all penned by Peter O’Brien – were pulled by Eerdmans several years ago in what may have been a case of overkill – at least in the eyes of some. It seems that accusations of plagiarism were made, resulting in Eerdmans pulling all three of his commentators. I discussed this rather sad situation at the time here: billmuehlenberg.com/2016/08/18/writing-commentaries-problems-thereof/

Since then IVP and Zondervan have also pulled his other works, so now they are just not available, except as second-hand volumes at very inflated prices. As I said in my piece I link to above, I certainly will keep on using his commentaries, and will NOT be pulping my copies of them.

Much discussion has ensued on this issue since mid-2016, and I wish to say a few things more about the matter. One, O’Brien did release a brief statement. He said: “In the New Testament commentaries that I have written, although I have never deliberately misused the work of others, nevertheless I now see that my work processes at times have been faulty and have generated clear-cut, but unintentional, plagiarism. For this I apologize without reservation.”

And a helpful article on this by Stanley Porter is well worth looking at as well. He bemoans the way commentaries in general are written today, and also feels the pain of O’Brien: domainthirtythree.com/2016/09/05/the-shocking-news-of-peter-obrien-and-plagiarism-august-is-the-cruellest-month/

Lastly, every time I grab one of his volumes I hurt a bit inside. He spent many decades of his life working on these works. His Hebrews and Philippians (NIGTC) commentaries are each 600 pages in length. His Ephesians commentary is 540 pages, and his work on Colossians and Philemon (WBC) is 330 pages. All that is now gone to most people.

He is still alive – at age 83 – presumably still based in Sydney. Nothing new from him has been published since 2016. It may be that he is just spending his final days in quiet desperation. Even though I have lived in Australia for three decades now, I have never met the man, nor heard him speak. But I greatly feel for him. Please keep him in your prayers.

Sorry for this diversion on Yarbrough’s commentary. My point is this: the PNTC series is excellent, and the latest volume by Yarbrough certainly does not disappoint. It is a must add to your NT commentary list. Hopefully no further volumes from this excellent series will need to be pulled.

(Australians can get this at Koorong: www.koorong.com/search/product/the-letters-to-timothy-and-titus-pillar-new/9781783597338.jhtml )

3 Replies to “A Review of The Letters to Timothy and Titus. By Robert Yarbrough.”