I had an interesting discussion on the social media with a gal who claims to be a Christian but seems to have absolutely no problems with homosexuality. Someone had reposted my article about another Christian celeb selling short the gospel, especially on that hot potato issue. That piece can be found here: billmuehlenberg.com/2018/12/02/no-jesus-did-not-accept-all-people-all-faiths-and-all-behaviours/

So this gal came along and made it clear that she was not too pleased with my article. For affirming what Scripture says about the issue, she accused me of being “dogmatic:” Isn’t it interesting how theological liberals always accuse those who take Scripture seriously of being dogmatic, even as they dogmatically push their liberal dogmas! 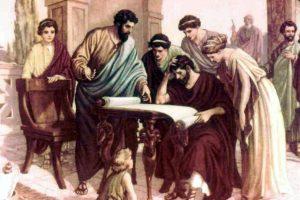 And she came out with more howlers: “Our job is not to discern and judge sin.” It isn’t? Hmm, I must have been reading the wrong Bible for all these years. Mine clearly says that we are to do just that – beginning with ourselves, and then with the rest of the Body of Christ.

Then she proudly asserted that it is “unlikely that Bill has done any research” on the matter of homosexuality. I assured her that with three books and 900 articles on the topic, I might have done a bit of research on these matters. But she kept pushing her hobby horse.

She insisted that we must have a “rounded perspective” on this matter, and we must not stick with a “surface reading” of Scripture. Oh good grief. I said that basically no one for 2000 years ever questioned the fact that homosexuality is a sin as clearly stated in Scripture. Now the homosexual activists are actively seeking to rewrite the Bible and get Christians to doubt their own beliefs.

I also said one might as well argue that we need a “rounded perspective” on if Jesus is God, or if adultery is wrong, or if the Bible is just a human document, etc. That is simply to deny biblical Christianity and run with theological liberalism. I said that if she was serious about a “rounded perspective” she might grab some of my books.

I also offered three articles on this for her to peruse. It seems she did not bother to look at them, and she said that she was not too keen to “read books written by an author who sounds as though he sees a Berean approach as apostasy.” Oh dear. So now she was appealing to the Bereans to push her theological revisionism!

For those not in the know, the Bereans were praised for holding up all teachings to the light of God’s word. We find this recorded in Acts 17:11: “Now the Berean Jews were of more noble character than those in Thessalonica, for they received the message with great eagerness and examined the Scriptures every day to see if what Paul said was true.”

This is how I replied to this gal:

Sorry but there is absolutely nothing Berean about Scripture twisting and denying core biblical truths. Next thing you know you will be telling me we should give the cults a full hearing in the interests of having a “rounded perspective”. Sorry, no biblical Christian operates that way.

We are warned plenty in Scripture about those with itching ears and those carried away by every wind of doctrine. So please do not flatter yourself in thinking you are some sort of noble Berean. There is nothing virtuous or commendable or biblical about rejecting the clear teachings of Scripture concerning human sexuality and other crucial issues.

I do not mean to be curt here, but these are extremely serious matters, and far too many folks have been led into grievous error, and even to a lost eternity, by those pushing this ‘all theological ideas are equally valid and should be given a fair hearing’ nonsense. Um, no they are not, and many lead straight to perdition. What was that saying about ‘a lot of open minds need to be closed for repairs’? Blessings.

I must say, I have heard a lot of distortions of Scripture over the years, but this is the first time I heard someone claim the Bereans actually were known for running with the latest human fads and trends. It is the exact opposite of course: they refused to listen and believe someone – even the esteemed Apostle Paul – until they were first assured that all that was said fully lined up with Scripture.

The Berean approach was never to urge theological relativism and claim that all views contained some truth, and we should just chill and listen to everyone. The church never would have made it beyond the first century if it had adopted that ludicrous and fully unbiblical mindset.

They were rigorous in searching Scripture. They believed that they should “test all things” as Paul commands us (1 Thess. 5:21). They knew that ravenous wolves would come in and seek to destroy them as Jesus warned (Matt. 7:15). They knew that they had to guard their beliefs and their practices as Paul urged (1 Tim. 4:16).

But this gal, and so many like her, actually see this as being narrow-minded, dogmatic, inflexible, and somehow not very Christlike! Go figure. She thinks it is somehow a good thing to let every point of view get an equal hearing, and that anything goes.

Sorry, it does not work that way. Yes, we should be open to testing and correcting our beliefs. And yes, certainly on secondary doctrinal issues there can be room to move, and a place for debate and discussion. But on primary doctrinal beliefs we do not just vote on them or flip a coin.

They are non-negotiable, and we easily move into error, apostasy and heresy when we play fast and loose with core biblical teachings. And I fully take it that the biblical teachings on the issues of God’s intentions for human sexuality are among those core teachings. Mess with those and you end up in real chaos.

And that is just where we are now at with the theological revisionists. They are seeking to rewrite the whole of Scripture to justify and promote their sin. And too many clueless Christians have hopped on board this hell-bound bandwagon.

For those who want to know about how to refute these oft-heard revisions of Scripture, let me point you to my first book on homosexuality, Strained Relations. There I spend a good part of my book dealing with all this. It is the same old tired nonsense that has been refuted time and time again.

And I urge all of you to be a Berean – a true, biblical Berean. That means making sure the Bible is your touchstone and point of reference on all things. It does NOT mean being so open-minded that you no longer believe in anything or stand for anything.

17 Replies to “No You Are NOT Being a Berean”