When you keep banging your head against reality, against morality, and against biology, something’s gotta give eventually. One cannot go on forever in a state of denial as to what humans and human sexuality are really all about. At some point ideology must run up against the hard, cold wall of reality. 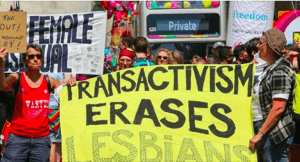 We had this happen with the former Soviet Union as it tried to fight economic, social and political – and even religious – realities. While stalwarts like Thatcher, Reagan and Walesa, along with cruise missiles in Europe helped to put an end to that hideous Marxist experiment, the Soviet crack-up was also brought about by its own internal contradictions.

It was just not sustainable in the long run. Despite all the guns and fear and repression and tyranny, it eventually collapsed in a heap. We now see similar things happening in the militant alphabet world. Despite seeming to reach near-hegemony in its ideological conquest of the word – certainly the West – it has enough internal contradictions and conflicts to spell its own doom.

And we are now seeing that all over the place, with various camps and factions at each other’s throats. Feminists and lesbians and trans folks all seem to have declared war on each other. Of course many of us just sit back and watch this self-destruction, and mutter “good” to ourselves as we observe it all taking place.

I have documented this before, but here are some more recent cases of this. One amazing example comes from the Women’s Liberation Front (WoLF). They have put out a statement attacking the alphabet warriors in forceful terms with this title: “Declaration of no confidence in LGB movement leadership”. It says this in part:

Regarding: Your political malpractice, attacks on the rights of women and girls, endangerment of at-risk youth, endorsement of commercial sexual exploitation, attacks on public decency and privacy rights, misrepresentation of medical and biological science, and efforts to secure extraordinary privileges for predatory individuals at the risk of the reputation of every person you claim to speak for;

Petitioners request: That you cease the following behavior, apologize to your natural constituencies, and make restitution for damages to the rights of others and the reputation of your purported communities, or resign your claims to speak on behalf of the rights of same-sex attracted women, or any other women and girls, in light of the following:

Misuse of science – Sex is determined by objective, physical criteria, not mental states. Mammals can’t change sex. Some doctors and scientists may go along with changing social or legal markers out of an attempt to be polite or ease suffering, to save their careers from the online mob, or to attract a new market in patients: but they’re never going to submit a peer-reviewed paper documenting a case in which a human being changes from male to female. Nor will they submit a paper worrying over the pronouns of cows, or classifying any animal research subjects by sex on any basis other than the type of gamete they’d produce if they were healthy and reproductively active. Stop encouraging the idea that sex is a “social construct.” Stop claiming that the fact that sex exists is “white colonialism,” as though colonial-era Europeans were the only people who ever figured out how babies are made, and no one else knew until they showed up. This is nonsense on par with claiming that the Earth is flat and it makes everyone who repeats it sound ridiculous….

Anti-lesbian harassment – Telling young lesbians that a rejection of sex with male people is “transphobic” is an appalling example of homophobia, which has become endemic to the so-called LGBT community. Young women and girls first coming to understand their exclusive same-sex attraction go to the “queer” community for acceptance, and too often get told that they’re “vagina fetishists,” “violently exclusionary,” or that they are probably straight men “trapped in the wrong body.” What’s more, few if any gay men are subject to this kind of homophobic abuse, though even that appears to be on the rise. This is grooming and conversion therapy. Movement leaders must speak out against this now-common practice or they shouldn’t pretend to care about lesbians.

Lesbian & gay erasure – Calling heterosexual men who enjoy dressing “as women” lesbians, or calling heterosexual women who’ve undergone extensive body modification gay men, is an erasure of the unique experience of being exclusively same-sex attracted. Stop calling straight people lesbians, or gay. Particularly, stop encouraging heterosexual men to represent themselves as lesbians, or be promoted by your organizations and grantees as if they were lesbians and entitled to speak for women on that basis; this is homophobic and insulting to all women.
womensliberationfront.nationbuilder.com/declaration-of-no-confidence?utm_campaign=no_confidence&utm_medium=email&utm_source=womensliberationfront&fbclid=IwAR1TcD9SdaoSTcGJCHOwsY5Yfc1v6FuZ2dMqS_5SNwY-HIe6DX3wbyDxfUw

And this from January 29:

Kara Dansky, a feminist lawyer and spokeswoman for Women’s Liberation Front (WoLF), spoke against the so-called “Equality Act” at the Heritage Foundation on Monday, denouncing the transgender and gender identity movement as anti-women and anti-lesbian in particular. Her remarks echoed the London Pride March sign declaring that “Transactivism Erases Lesbians.”

“This is a men’s rights movement — this is really a men’s rights movement,” Dansky declared, calling for men to stand up for women and denounce the transgender movement. “Overwhelmingly women have been resisting this,” Hacsi Horvath, a man who once identified as a woman and underwent surgery, said a few seconds before Dansky’s remark. “And it’s really shocking how many men on the internet are defending the whole trans thing. Straight men are all about the trans, and you have to wonder what the heck is going on.”

Horvath agreed with Dansky in condemning transgender activism as a “men’s rights movement,” and Julia Beck — a lesbian and former member of the Baltimore mayor’s LGBTQ Commission — nodded in agreement. Beck had been kicked off of the commission for opposing transgender identity.
pjmedia.com/trending/lesbian-feminist-transgender-activism-is-a-mens-rights-movement/?fbclid=IwAR3QS_MYkv4UVZsv0t0xMO4uk8vb5L7HWfpD8nr58t_KkIVGSzzrzHHbRiY

Last year we had more of the same:

Lesbian activists have blocked London’s LGBT Pride march in protest against the Trans movement. Yes, you read that correctly. The ‘L’ in LGBTQ+ wants out, if the ‘T’ remains in. The group of women blocked the parade for about 10 minutes, shouting “A man who says he’s a lesbian is a rapist,” and waving a banner that read: “Transactivism erases lesbians.” The group also distributed flyers with the headline, “Get the L out.” The flyers went on to state, “The trans movement is… coercing lesbians to have sex with men. We firmly condemn this vicious form of anti-lesbianism disguised as progress.”
caldronpool.com/lesbians-want-out-of-lgbtq-because-the-trans-movement-is-anti-lesbianism-disguised-as-progress/

And recall that Scarlett Johansson had to drop out of trans movie role because of rainbow backlash:

Scarlett Johansson will not be portraying the cross-dressing, lesbian crime kingpin Jean Marie Gill after all following a public outcry from LGBT activists, putting the film’s fate into question. Earlier this month, it was announced that the Avengers star would take the lead role in Rub & Tug, a dramatized version of the real-life Gill’s rise to power in 1970s Pittsburgh. Gill was female like Johansson, and it’s uncertain whether she actually considered herself a man in addition to simply impersonating one, yet trans actors and advocates expressed outrage at the “cis-woman” actress for taking one of “their” roles.

Transparent’s Trace Lysette accused Johansson and other non-trans actors of “steal[ing] our narrative and our opportunity” and winning awards “for mimicking what we have lived,” while conservative columnist Daniella Greenbaum resigned from Business Insider after it deleted an article dismissing such “social justice warrior” complaints on the grounds that playing “someone different than herself” is the essence of all acting. Johansson initially attempted to dismiss the complaints by invoking other non-trans actors who received critical acclaim for trans roles, but on Friday she issued a statement to Out announcing her withdrawal from the project.
www.lifesitenews.com/news/scarlett-johansson-drops-out-of-trans-movie-role-after-lgbt-backlash?utm_source=LifeSiteNews.com&utm_campaign=274ae70bdb-Daily%2520Headlines%2520-%2520U.S._COPY_294&utm_medium=email&utm_term=0_12387f0e3e-274ae70bdb-401398773

These guys are imploding before our very eyes. Hey, that’s fine by me. Let me conclude with some words from Jonathon Van Maren. Late last year he said this:

One of the most fascinating aspects of the transgender movement’s meteoric rise over the past half-dozen years is the increasingly overt hostility between old guard feminists and transgender activists. Veteran sexual revolutionaries like Germaine Greer have been “de-platformed” and protested for stating that biological males identifying as female cannot understand the female experience, and trans activists claim that feminists who do not accept their version of gender ideology (or gender fluidity, for that matter) are TERFs—“trans-exclusionary radical feminists.” One trans activist—a biological male named Tara Wolf—actually physically assaulted a female feminist earlier this year for being “exclusionary.”

Watching the feminists who began the deconstruction of femininity do battle with the activists who want to take the next big step is almost surreal—especially considering the fact that they genuinely loathe each other. Some of the angriest columns and essays denouncing the transgender movement have not come from social conservatives, but have instead come from feminists—many of whom seem to realize that their movement is rendered entirely irrelevant by many of the transgender movement’s ideological premises. The hatred is hot and mutual.

Things are only getting worse as the totalitarian instincts of the transgender movement come into full view—with one irony being that it is so often biological males claiming to be female going up against biological females, with the men playing the victim. Watching biological males bully women by claiming that they are women and that they are being bullied has been bizarre to watch. One particularly insane story this week highlighted the lengths trans activists will go to in order to destroy the “trans-exclusionary” feminist movement—and their war on language itself.
He concludes:

And that’s the insanity of it all: The war between the feminists and the trans activists often constitutes biological men telling women that they do not know what being a woman is all about, and thus need to have it explained to them by biological men who cannot, by very definition, understand the physical experience of being female. And yet, the trans activists wield enough power to bully many politicians, media figures, and businesses into accepting their ideological premises, if not openly voicing support for them. We can only hope that this cultural insanity is recognized for what it is sooner rather than later.
www.lifesitenews.com/blogs/why-men-who-identify-as-female-have-declared-feminists-the-newest-hate-grou?utm_source=LifeSiteNews.com&utm_campaign=70cfb611f1-Daily%2520Headlines%2520-%2520U.S._COPY_345&utm_medium=email&utm_term=0_12387f0e3e-70cfb611f1-401398773

Let the warfare continue. I am quite happy to sit back and enjoy it all.

13 Replies to “The Coming Crack-up of LGBQTI”