As soon as Adam and Eve disobeyed God, the excuse-making began. And it has been that way ever since. Sinners who love their sin will do everything they can to try to convince themselves and others that their sin is not actually sinful. 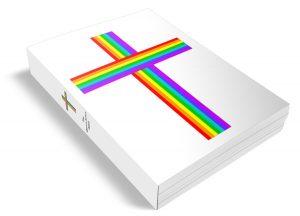 Every lousy trick in the book is pulled out to justify, excuse and sanitise sin. The Devil is a specialist in all this, and he is a seasoned expert in deceiving millions of people. Indeed, consider the very first recorded words of Satan found in Scripture: “Did God really say…?” (Genesis 3:1).

That has ever been his strategy: getting folks to question God and his word. We see this perfectly illustrated when it comes to the issue of homosexuality. The Bible is 100 per cent clear that this is sin – end of story. But every idiotic and deceptive attempt has been made to try to convince us otherwise.

One of the most sophomoric and just plain laughable attempts is when the pro-gay activist tries to tell you that the word ‘homosexual’ is not really in the Bible. The sheer stupidity and full-on Scripture-twisting found here should be evident to anyone with half a brain.

Of course we fully expect Christophobes, atheists, secular humanists, and homosexual activists to push this sort of nonsense. But what we DON’T expect is when people who claim to be Christians do the very same thing. Whether completely brainless or just plain satanically deceived, I have heard this one being whipped out by those who pretend to be Christians far too often.

As just one example, consider this discussion from a few years ago on the social media. It was a debate I saw between a sin-defender, or Theological Revisionist (TR), and a God-defender, or Biblical Christian (BC):

TR “God’s love includes everyone. There are no passages in the Bible for us that forbid homosexuality. The ones we were TOLD were about it are taken out of historical context and biblical context.”

TR If you believe the Americanized, western versions of the scripture, yes it says that. If you go beyond the false interpretation’s since the days of Luther and Calvin and King James version of the Bible, it unearths a completely wide open spectrum that God does not judge like we assume he does. You know how culture wars because of these false assumption. I urge you to watch the presentation on Wednesday. Strongly so in fact

BC No even today God forbids it! His word never changes! He is the same yesterday! Today! And forever! I bless you to see His truth! It’s in the New Testament where they were handed over to their sinful desires? Anyway we will have to agree to disagree.

TR How can his word forbid it when it was never in the bible to begin with??

Oh dear. There are so many just plain ludicrous and irrational things being said here by the TR that one hardly knows where to begin. And it could also be pointed out that the BC might have said or argued things a tad better, but at least he was seeking to stay true to Scripture.

Let me cut to the quick here however and do so by mentioning two ‘A’ words. The first is ‘apostate’. That has to do with someone who claims to have known and walked with God but later rejects and repudiates God and the clear teachings of Scripture. They have renounced the faith in other words. We have a good example of this going on here.

But the other word is ‘anachronism’. If it is a new term for you, it may be time for Christians to add it to their vocabulary. One dictionary gives us the following definition of anachronism:

So what is my point? Simply this: Of course the word “homosexuality” is not found in the Bible – or at least in older, non-English Bibles. And that for the very simple reason that this English term did not appear until the early 1890s. So obviously no one used it before then – whether in a Bible or anywhere else!

More specifically, it seems the “first known appearance of the term homosexual in print is found in an 1869 German pamphlet. . . . The first known use of homosexual in English is in Charles Gilbert Chaddock’s 1892 translation of Richard von Krafft-Ebing’s Psychopathia Sexualis, a study on sexual practices.”
en.wikipedia.org/wiki/Terminology_of_homosexuality

And since a new word takes quite a while to circulate and filter throughout the rest of society, it is not surprising to find that the English term “homosexual” did not appear in an English Bible translation until 1946. But plenty of other perfectly good terms were used in English translations prior to that time.

The bottom line is this: it is pretty hard to find a particular word in older literature if it is in fact a somewhat recently invented word! So of course we will not find it in earlier Bibles – or any other literature. So these theological revisionists are simply clueless wonders here – or deliberately deceptive and disingenuous.

Now some of this can be due to the fact that most folks – including most Christians – do not know ancient Hebrew, Aramaic, or Greek. They simply rely on modern translations in their own languages, and are rather ignorant about how languages and translations work.

While this is not the place to get into a major discussion of translation theory, textual criticism, and related matters, let me make a few brief points. First, most modern English-language translations are quite reliable and quite helpful in giving us the Word of God, especially for those with no knowledge of the original languages.

Sure, some translations might be a bit better than others, but that is another matter. See here for more detail on this and similar issues: billmuehlenberg.com/2011/06/23/on-bible-versions-and-translations-part-one/

Second, the English word “homosexuality” does now exist, and it can be an acceptable word to use to get the sense of what we find Scripture talking about. The Hebrew and Greek words that are used are quite clear and straightforward. Passages like Leviticus 18:22 and Romans 1:26-27 leave us in no doubt as to what is being discussed – and condemned.

I have very carefully discussed the biblical passages and terms in my 2011 book Strained Relations. I urge you to pull it off your shelves and give it a read. Or buy it and then read it! But let me share just a short portion of that book here. On pages 209-211 I consider just one of these passages, 1 Timothy 1:9-10, which says:

“We also know that law is made not for the righteous but for lawbreakers and rebels, the ungodly and sinful, the unholy and irreligious; for those who kill their fathers or mothers, for murderers, for adulterers and perverts, for slave traders and liars and perjurers – and for whatever else is contrary to the sound doctrine”.

I wrote this, in part:

The term rendered by the NIV as ‘perverts’ is arsenokoitai, which, as we have already seen, means males who take other males to bed. As scholars point out, it is a rare word. It “does not appear to have existed before the time of Paul”.

After examining some contemporary Greek and Roman usages of the term, New Testament scholar Ben Witherington says this: “This word literally and graphically refers to a male copulator, a man who has intercourse with another man.”

The compound word is made of two terms, arsenos (= male) and koitain (= sleep with, lie in bed, have sexual relations with, from which we get the word coitus, ie., intercourse). ‘Male bedders’ would be a literal, if somewhat wooden, translation. Sex between men, or homosexuality, is clearly in view here.

Both of these two terms come directly from the Septuagint (the Greek translation of the Old Testament) version of the two Leviticus passages. Lev. 18:22 contains both terms, as does 20:13. So Paul clearly has the Holiness Code in view when he used this term. Scholars such as David Wright in fact believe that Paul coined this term from the two Leviticus texts.

The term clearly covers all aspects of homosexuality, not just some. As George Knight comments, the “word does not refer, as some writers have alleged, only to sex with young boys or to male homosexual prostitutes, but simply to homosexuality itself (so Paul explicitly in Rom. 1:26, 27).” Or as Quinn and Wacker argue, “the arsenokoitai are … understood to be all homosexuals, active or passive, old or young”.

One leading expert on the Pastorals, Philip Towner, says this about the term in question: “It denotes, unequivocally, the activity of male homosexuality, and the view of this practice adopted in this text corresponds to that of Paul elsewhere (Rom. 1:27).”

The simple truth is this: there are all sorts of terms found in modern English (and other language) translations of the Bible that never appeared earlier for the simple reason that they did not exist until rather recently. Paraphrases especially can make use of contemporary words, phrases and terminology to convey ancient truths.

But this need not diminish the truth of the original texts of course. It simply is about giving old Biblical passages new relevance or clarity by using more modern terms to help give the sense. So the issue is not what a contemporary English term says or when it was first coined or used.

The issue is: What do the original languages of the Bible say? What does the Hebrew Old Testament and the Greek New Testament in fact say? That is the real issue here. And the various passages in question all quite clearly refer to what we today refer to as homosexual acts.

In sum, to foolishly and ignorantly claim that the English term “homosexuality” is not found in any Bible until recently is not only being utterly anachronistic, but is being deliberately deceptive when it comes to the Biblical text. The Bible from start to finish condemns homosexuality while affirming the only divinely-mandated form of human sexuality: the one man, one woman marriage union.