Increasingly Western corporations have declared war on Christianity. This has not always been the case, but with the radical homosexual and trans tsunami smashing everything in its path, big business today has basically rolled over and said yes to all their sordid demands.

Now all traces of Christianity must be obliterated, or made to submit to the hyper-sexual agendas. Christian values and beliefs can no longer be tolerated, and all staff and customers must bow before the rainbow militants. Those who refuse to do so will pay a heavy price. 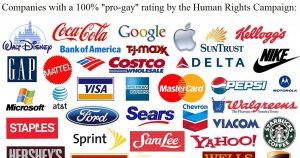 All this means that Christians who are also conservatives need to readjust their thinking somewhat. Let me explain. There has traditionally been a fair amount of overlap between conservatism and Christianity. Of course the two are not identical, but there can be plenty of common ground between the two, much more so than between Christianity and leftism. That case I have sought to carefully make elsewhere, eg., www.billmuehlenberg.com/2010/08/24/what-is-conservatism/

And of course a big part of conservatism has been a belief in free markets as opposed to socialism. But often those arguing for the superiority of capitalism have also acknowledged that it must be more than a rugged laissez-faire economic system devoid of any moral or religious underpinnings.

Many fine proponents of the free market who also argued for such underpinnings could be cited here. Let me mention just a few authors and books:

But that I have also spoken about in more detail, as in this piece: billmuehlenberg.com/2015/04/06/markets-and-morality/

Today however we have more and more corporations and big businesses which have run with a much more amoral, immoral, libertarian, maximise-profit-at-all-costs approach. As such morality and Christianity are often seen as obstacles, not allies. We see this in so many areas. For example, how many businesses are pushing pro-abortion or pro-Islam policies and actions?

But it is the sexual juggernaut that is certainly a major concern here. And many of you would have found further proof of this in today’s news. Consider this shocking headline: “Kmart photo printing kiosk bans Christian words in ‘software error’.” The article opens:

A ban on religious words such as “Jesus’’ and “church’’ at Kmart photo printing kiosks was yesterday blamed on a “software error’’. While users could caption their photos using terms such as “mosque’’, “Islam’’ and “Koran’’, words relating to Christianity such as “bible’’ were deemed to be “profanities’’ by the automatic kiosk system and replaced with asterisks on photo captions. The Daily Telegraph tested kiosks at several Kmart stores around Sydney yesterday and found the words “church” and “Jesus” were defined as “profanity” and censored by the system.
www.dailytelegraph.com.au/news/nsw/kmart-photo-printing-kiosk-bans-christian-words-in-software-error/news-story/e6072721b8a36d966ac390e308ffba67

Yeah right – “software error”. Sorry, but I just ain’t buying it. Particular words would have had to have been deliberately entered in to get such an outcome. Kmart is simply backtracking big time because of a very quick and very loud public outcry.

But we have had countless examples of Big Business getting into bed with the hyper-radical sexual militants and siding against Christianity and morality. One recent article on all this said this: “In 2019, there are multiple companies, big and small, that champion LGBTQ equality hiring – and these places are hiring now! So whether you are an LGBTQ-identifying candidate or an ally that wants to work for an inclusive company, both in and out of the workplace, then you’ll want to send your resume to the following businesses.” It went on to list a number of big companies proudly on the homosexual bandwagon.
www.glassdoor.com/blog/companies-lgbtq-equality/

So where does this leave the Christian who also has conservative tendencies? Do we ditch the capitalism and latch onto socialism as if it is somehow more Christian? Um, no. Socialism impoverishes the masses and benefits only the elites. The free market, for all its faults, is still the best thing known to man to raise the masses out of poverty and help people have a better standard of living.

So a free market with a moral foundation is still worth supporting. But we need to see the bigger spiritual dimension to this as well. For example, many of the horrific warnings found in the book of Revelation about various tyrannies and persecutions are associated with economic and commercial activities.

Mystery Babylon and the like all have very real economic and cultural aspects to them. I have written about this before, as in this piece: billmuehlenberg.com/2016/04/27/godless-corporations-rampant-discrimination-blackmailing-christians/

I urge you to read those pieces. It is the ungodly and immoral Babylon which is seducing the whole world that we have to be aware of and steadfastly resist. And this is not for the far distant future. It is happening now. When the homosexual head of Qantas Alan Joyce for example tells flyers they are not wanted if they do not support the rainbow agenda, this is serious stuff. As I said in the first piece above:

Wow, the ability to buy and sell is taken away from those who remain faithful to Christ and refuse to bow down and worship the demonic agendas of those opposed to God, morality and truth. Hmm, sounds exactly like what Joyce and others are talking about. This is real serious folks. When you get misotheists with this much power and influence making these sorts of ugly threats to all who reject their godless sodomite agenda, then you know things are getting really bad. It remains to be seen how all this pans out, but it sure is not looking good.

Indeed, it is only going to get much worse unless all Christians stand up and be counted here. And that will mean engaging on all levels. For example, godless, immoral and anti-Christian businesses need to be avoided and boycotted. Take your hard-earned cash elsewhere people.

And given that this is all ultimately a spiritual battle, we will also need to engage in spiritual warfare. Yes make a stink, tell others, give these sleazeball corporations the flick – but also pray like mad and intercede against all the powers of darkness that are behind these evil big businesses.