“The Bible is a book of hate speech. It is bigoted, racist, intolerant and reactionary. It brings about division, hatred and exclusion. In our modern progressive society, we simply cannot allow this hate speech to be freely available. In the interests of a loving, harmonious and peaceful society, it must be banned now.” 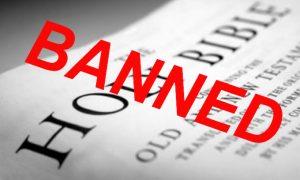 As we now know, all around the West those who simply quote from the Bible are being persecuted. Some are losing their jobs, some are being fined, and some are even being jailed. Two of the most recent cases of this I have written on just recently. One involves the persecution of Israel Folau, and one involves Amazon pulling Christian books.

I discussed both of these cases just yesterday in a piece I wrote on book burning: billmuehlenberg.com/2019/07/08/book-burnings-statism-and-corporatism/

There I spoke of how books and magazines and films have all been censored and destroyed by totalitarian regimes. I could have added art as well. Recall that the Taliban destroyed Buddhist statues, and now Democrats in California are destroying works of art – murals of George Washington deemed to be politically incorrect.
www.nationalreview.com/2019/07/san-francisco-board-of-education-george-washington-murals/

But let me follow up on the two cases I discussed in that piece. The Folau saga is of course still bubbling along. One of the most recent and most alarming developments was the release of a transcript involving a hearing with three judges and Rugby Australia chief Raelene Castle. Consider this actual portion of the transcript from the code of conduct hearing held last May:

Chairman John West, QC: Could I ask a question?

Chairman: Ms Castle, what if Mr Folau had photocopied passages from the Bible and simply posted that on his social media pages, would that have caused a problem for you?

Ms Castle: I think it depends on which ones — which pages he photocopied.

Chairman: If he’d photocopied the passages that are referred to in the posts would that have caused a problem for you?

Ms Castle: Yes it would have.

Wow. Did you get that?! The head of Rugby Australia considers the Bible – or parts of it at least – to be so problematic that it cannot be quoted from, even by an employee on his own time. That is now a sackable offence. You can permanently lose your entire career for daring to cite the Word of God.

As Miranda Devine wrote about this alarming development, “Raelene Castle effectively damned the Bible as hate speech in astonishing unreported testimony at Israel Folau’s code of conduct hearing in May.” And NSW Senator Concetta Fierravanti-Wells put it this way: “Ordinary people of faith are now, understandably, asking the question: if I quote my Bible, will it get me into trouble?”

Israel Folau is the sacrificial lamb for the secular humanists and the forces of political correctness. You WILL be made to pay a price for defying your secular left overlords. You WILL not dare to quote from that hateful Bible. If you do, there WILL be grave consequences for your transgressions.

The second item I mentioned in yesterday’s article was the shocking decision by Amazon to pull a number of books which offer hope for those struggling with unwanted same-sex attractions. Amazon has now become a censor of ideas it finds offensive.

And the big cheeses at Amazon are obviously greatly offended that someone with same-sex attraction may not be happy with it, and may seek help in changing. Hmm, I will bet you my house – and the large library it contains – that these same folks believe that if you are unhappy with your biological sex, you can and should get help in changing it!

This is just another ugly example of corporate fascism. A book seller has got into the business of book burning – or at least book banning. Thankfully not everyone is just going to let this go without a fight. The Voice of the Voiceless group in the US is taking this on. As they say about themselves on their homepage:

The mission of Voice of the Voiceless is to defend the rights of former homosexuals, individuals with unwanted same-sex attraction, and their families. We also support the faith-based community and work actively in the United States to defend the constitutional rights of all Americans to share their views of homosexuality in the public forum. We support similar international efforts and provide assistance, whenever possible, to individuals and organizations abroad who align with our mission and goals.
www.voiceofthevoiceless.info/

Now they have launched a petition to get Amazon to stop this censorship. Let me share the entire text of it here:

Voice of the Voiceless started this petition to Amazon.com and 4 others

We are outraged that a smear campaign by one individual (who stated here that he never read these books) could convince Amazon to censor all books, audiobooks, and Kindle material related to our experiences and viewpoints.

For every major issue there are two sides to each story. For one side to be bullied and censored on every platform is counter to the values we have long held in common with Amazon.

We demand an immediate reversal of this decision and the restoration of these and all other books that were removed on this topic:

Shame and Attachment Loss: The Practical Work of Reparative Therapy by Dr. Joseph Nicolosi
Restoring Sexual Identity: Hope for Women Who Struggle with Same-Sex Attraction by Anne Paulk
The Battle for Normality: A Guide for (Self-)Therapy for Homosexuality by Dr. Gerard J. M. Van Den Aardweg
Healing Homosexuality: Case Stories of Reparative Therapy by Lucy Freeman and Dr. Joseph Nicolosi
Coming Out Straight: Understanding Same-Sex Attraction by Richard Cohen
Growth into Manhood: Resuming the Journey by Alan Medinger
A Parent’s Guide to Preventing Homosexuality by Dr. Joseph Nicolosi and Linda Nicolosi
Reparative therapy of male homosexuality: A New Clinical Approach by Dr. Joseph Nicolosi
Straight Talk about Homosexuality: The Other Side of Tolerance by Richard Cohen
Desires in Conflict: Hope for Men Who Struggle with Sexual Identity by Joe Dallas
Orientation and Choice: One Man’s Sexual Journey by David Robinson
and all other books that were censored for this topic.
www.change.org/p/amazon-com-reverse-amazon-s-decision-to-censor-alternative-views-on-homosexuality

Hmm, I know a number of these people and I have a number of these books. I strongly urge you to sign the petition and share it far and wide. In yesterday’s article I concluded by quoting Heinrich Heine. I need to do the same today: “Wherever they burn books they will also, in the end, burn human beings.”

Let me also run with the words of Benjamin Franklin: “Whoever would overthrow the liberty of a nation must begin by subduing the freeness of speech.”

Yes things are that serious. It is time for all of us to stand up and say, ‘Enough is Enough!’