We live in pretty radical times, and so we need some pretty radical solutions for all that ails us. And many people think that our biggest problems include a lack of tolerance and inclusion, and being offended all the time. So how can we deal with these bigtime problems?

Well, one way is to rewrite all our literature to ensure that we all feel safe, included, loved and accepted. We must make sure there is nothing left that might offend us or make us feel bad. Above all, we want only that which will make us happy to be available – all else must be banned. 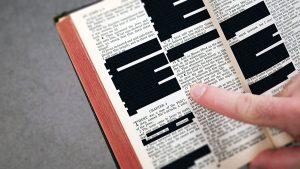 Given that so much which is found in the Bible is clearly so offensive and hateful, an obvious solution would be to radically rewrite it, if not ban it altogether. Maybe we could make a homosexual-friendly Bible for example to keep all gays – and Rugby Australia – happy.

Hmm, the problem with trying to do a bit of satire is that more often than not, reality has already beat us to it. Too often what we want to poke fun at has already occurred! Make a homosexual Bible? Um, sorry, its already been done. Really! Consider an article I wrote seven years ago: “The New Revised Perversion Bible”.

Yes one can already buy a “Bible” that has had all the inconvenient truths about homosexuality conveniently taken out – or radically rewritten. See my piece here: billmuehlenberg.com/2012/12/14/the-new-revised-perversion-bible/

But the forever aggrieved, forever offended, and forever PC mobs keep crying for more. So the place for satire to deal with all this will forever be required. Speaking of which, my friend Peter Barnes put out a brief satire piece on all this yesterday.

In it he refers specifically to Rugby Australia’s ugly crusade against Israel Folau and its hatred of Scripture. They have of course made it clear that Folau was wholly evil in quoting from the Bible – at least those bits that they disapprove of.

So Barnes had a go at this. Entitled, “Rugby Australia to release the ‘New Rugby Revised Version’ of the Bible,” it is so short I can offer the entire piece here:

There are well-substantiated rumours that Australian Rugby is seeking to produce a coffee table revision of the Christian Scriptures, to be called the New Rugby Revised Version (NRRV). Some of the contents have had to be changed. Sodom and Gomorrah are showered with blessings, and Lot’s wife is turned into a pillar of the PC establishment.

No real place could be found for John the Baptist, who has been relegated to a footnote while Herod Antipas receives an unusually favourable press. But the enduring message remains the same: Christ Jesus came into the world to try to make people nice.
caldronpool.com/rugby-australia-to-release-the-new-rugby-revised-version-of-the-bible/

Brilliant. But we can keep adding to this of course. Or, more accurately, we can keep taking away – from Scripture. To make it completely palatable to everyone, to make sure we offend no one, and to keep everyone happy just as they are, we can do a whole lot more to make the Bible PC-friendly.

So let’s look at some of the passages and themes found in Scripture that have to go – all in the name of tolerance and inclusion.

It is clear that all the passages discussing homosexuality would have to be given the heave-ho. That includes texts from both the Old and New Testaments. But we cannot stop there. It is obvious that all the biblical passages on marriage will have to go as well. After all, heterosexual marriage is just so bigoted and discriminatory.

But that is only the beginning. All those verses about sexual sin and immorality must be expunged as well. Just think how many people feel bad when they see those verses! We need to create safe spaces for adulterers and fornicators and those into polyamory and incest and even bestiality. It is time to stop offending people!

And don’t forget about all those verses on holiness. There would be heaps of those sorts of texts. How many people are made to feel judged and excluded when they read such stuff? It is not nice to offend so many people with all these demands for godliness, holiness and the like.

For that matter, everything that focuses on notions such as sin really must go. After all, why pick on sinners? Why should we make them feel so bad about themselves? So it is high time we delete all references to sin. OK, I realise that plenty of popular preachers already do this – but here we are talking about cleaning up an offensive and intolerant Bible!

And then there are all those ghastly verses in the Bible about judging! Good grief – those gotta go, and now! The worst thing we can ever do is dare to judge someone, dare to say what they are doing is wrong, and dare to point out perceived faults. Live and let live is the message of the Bible – isn’t it!?

While we are at it, it is clear that all those nasty passages about the wrath of God and about hell to come must be scrapped immediately. How dare we suggest that God is ever angered – and angered by something like sin? How dare we suggest that those who fully reject God and shake their fist at him in this life with spend the next life fully apart from him?

Another key set of verses which are just unacceptable for us tolerant and progressive types are those which speak about the exclusiveness of Christ. Come on man, don’t you know that all roads lead to God, and Jesus is just one of many great religious leaders, moral teachers and gurus?

Of course we must also ban any mention about the deity of Christ – and the Trinity. Jesus is just our buddy and a cool inspiration, but nothing more. All talk about deity and divinity is simply discriminatory and arrogant. Besides, all people are already divine anyway!

And it goes without saying that of course atheists don’t even wanna hear about God, so we gotta whole lotta pruning to do here. A fully anthropomorphic Bible would be much more fitting in our tolerant and inclusive age. No more talk about some God who exists and made us and who we are accountable to.

Needless to say, evolutionists also need to be placated here. They do not like the idea of creation, so it is time to ditch the book of Genesis and all those other offensive passages that speak of a God who has created everything. And the sooner the better!

Relativists sure do not like the idea of absolute truth, so those kazillions of texts that affirm truth and absolutes certainly have to go. We do not want to offend all those folks who believe truth is subjective and personal, and want to be left alone to believe whatever they want.

And pacifists do not like hearing about warfare and killing, so we must delete everything involving war and death. Clearly much of the Old Testament needs to go. We need a book that is uplifting and makes us happy. Enough of all this blood-shedding! Speaking of which, everything about a bloody cross also has to go.

Plenty of other objectionable bits need to be pulled as well. But I think you get my drift. Hmm, by the time we do a good thorough clean out of all those narrowminded, bigoted and offensive passages, we should be down to a much more manageable Bible: about 6 words all up – fragments of just two verses.

We would have a wee bit of Matthew 7:1 of course; “judge not” and then four words from 1 Corinthians 13 “the greatest is love.” Well, there you have it my friends: The New Progressive Revised Version. It’s gotta be a winner. Everyone should love it. It will offend no one and please everybody. It should quickly become a best-seller.

We can also call it The New Non-Offensive Bible. What a terrific idea! Why didn’t someone think of this sooner? Just imagine a world where no one gets offended anymore! How wonderful.

Sure, God might get offended by all this – but so what?

29 Replies to “A Bible for Today: The New Progressive Revised Version”