Ask any tyrant or dictator how best to set up shop, and one of the first answers will be this: totally control the flow of information. Determine what people can see or read – or even think. Ban all books, authors and even ideas which are deemed by the totalist state to be verboten. That should do the trick.

Recent history tells us all we need to know about this. The Nazis of course fully knew about the importance of banned books and banned ideas. Nazi Germany had a list of prohibited authors, which included the likes of Sigmund Freud, H. G. Wells, Aldous Huxley, Albert Einstein, Ernest Hemingway, Marcel Proust, and Oscar Wilde. 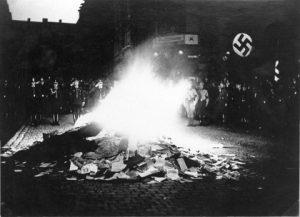 Even earlier, in the 1930s, we had book burnings in Germany and Austria. Any books that appeared to oppose the Nazi ideology or were considered to be “subversive” were consigned to the flames. And much more worrying was the fact that many of these burnings were instigated by student groups which were beholden to Nazi views. On one day alone – May 10, 1933 – these university students had burned some 25,000 books considered to be “un-German”.

The Communists also excelled in censorship and book banning. Literature and film were both heavily censored. Libraries were ransacked, books and journals destroyed, and foreign radio stations were jammed. The Soviets took control over the media, printing presses and even copying machines. As Stalin put it, “Ideas are more powerful than guns. We would not let our enemies have guns, why should we let them have ideas.”

The Communists also had prohibited reading lists. These are just some of the books banned in the former Soviet Union: Pasternak’s Doctor Zhivago, Defoe’s Robinson Crusoe, Orwell’s Animal Farm, and of course Solzhenitsyn’s The Gulag Archipelago.

Hardcore censorship is always the hallmark of totalitarian regimes. The consolidation of power must be maintained by a vice-like grip on the flow of all information and ideas. Allowing people to actually think for themselves and have access to differing points of view simply cannot be tolerated.

Thus whenever we find it occurring today in the West, we should ferociously resist it. And sadly this is just what we are now finding: modern forms of book burning. The censorship of ideas by the big boys in the West (Google, Twitter, Facebook, etc.) has been documented far too often already on my site. And when major bookstores get into the act, you know that things have spun out of control badly.

Consider just one recent example of this, with the biggest bookseller around: Amazon. They have decided to ban certain books which they obviously consider to be subversive and dangerous. Consider this frightening report:

Amazon has removed English-language books by a man largely considered “the father of conversion therapy” from its site following mounting pressure from LGBTQ activists. Dr. Joseph Nicolosi, founder of the now-shuttered Thomas Aquinas Psychological Clinic, as well as the National Association for Research and Therapy of Homosexuality (NARTH), authored several how-to guides directed to parents of LGBTQ youth, including “A Parent’s Guide to Preventing Homosexuality.” His books are some of the most well-known works about conversion therapy, the pseudoscientific practice of trying to change a person’s sexual orientation or gender identity.
www.nbcnews.com/feature/nbc-out/amazon-removes-controversial-books-father-conversion-therapy-n1026446

Ignore the editorial bias of this “news” report. The fact is, there are many thousands of former homosexuals who have benefited from the counselling of people like Nicolosi. I happen to be personal friends with a number of them. They were once fully and heavily into the homosexual lifestyle, but have now moved on – many of them now in heterosexual marriage and with children.

But these are the invisible people. They are not supposed to exist. The mainstream media has completely suppressed the reality of their existence. Theirs are the stories we are not supposed to hear about. I have written about this often before, eg.: billmuehlenberg.com/2012/08/14/but-he-is-not-supposed-to-exist/

So while the MSM daily gives us emotive sob stories of how homosexuals are supposedly still being oppressed in the West, the actual oppression – the war on ex-gays – is not being covered at all, at least in a sympathetic manner. You just would not know that these people exist if you ran solely with the MSM.

The simple truth about reparative therapy is this: people who are unhappy with their same-sex attractions can find help and counsel to deal with it if they so choose. End of story. There is no coercion here. No one is being forced to do anything. That too I have discussed previously: billmuehlenberg.com/2018/12/11/the-war-against-conversion-therapy/

Sure, this is a private business, as is Facebook and the others. But when they have near monopoly powers, then real choice is quickly being taken away from us. The enormous powers that these corporate giants have is now being brought to bear on those that they deem to be a threat.

Simply ask sacked rugby player and dedicated Christian Israel Folau about this. When you have entire banks and airlines and sporting bodies (heavily subsidised by taxpayers) all arrayed against you, this is just another case of Big Brother in action.

Speaking of which, Orwell was certainly prescient when he spoke to this. Thus in his 1949 dystopian novel Nineteen-Eighty-Four we find this perfectly laid out. The complete control of information, the manipulation of history, and the destruction of language are among the main focuses of Big Brother.

The Ministry of Truth and the creation of Newspeak are among the methods used to achieve complete subjugation of everyone and every thought. Consider this ominous passage from the book. A colleague of Winston Smith at the Ministry of Truth, Syme, “who worked in the Research Department.” says this:

“Don’t you see that the whole aim of Newspeak is to narrow the range of thought? In the end we shall make thoughtcrime literally impossible, because there will be no words in which to express it. Every concept that can ever be needed will be expressed by exactly one word, with its meaning rigidly defined and all its subsidiary meanings rubbed out and forgotten. . . . Every year fewer and fewer words, and the range of consciousness always a little smaller. Even now, of course, there’s no reason or excuse for committing thoughtcrime. It’s merely a question of self-discipline, reality-control. But in the end there won’t be any need even for that. . . . In fact there will be no thought, as we understand it now. Orthodoxy means not thinking – not needing to think. Orthodoxy is unconsciousness.”

Thoughtcrimes! Orwell precisely predicted today’s hate speech and hate crimes. When a star athlete like Folau simply quotes the Bible on his own time, the powers that be declare this to be a thoughtcrime, and he is punished accordingly.

If just one unaccountable body like Rugby Australia can declare the Bible to be a book of hate speech, just what will happen as Amazon and other corporate giants start doing the same? And how long before the government fully gets in on the act?

We have already seen this being played out with ugly statism. The Italian fascists coined the term “totalitarianism”. Mussolini defined it as follows: “Everything in the State, nothing outside the State, nothing against the State.” Now we find massive corporations joining in on the action.

I have recently revisited Paul Johnson’s magisterial 1983 volume, Modern Times. In it he said this: “The destructive capacity of the individual, however vicious, is small; of the state, however well-intentioned, almost limitless. Expand the state and that destructive capacity necessarily expands, too, pari passu.”

Today he would also include in that the destructive capacity of secular left corporate behemoths and their war on unwelcome thought and ideas. Politically correct corporations are now vying with secular states to outdo each other in censorship and repression of unacceptable views.

Today they are banning books, and tomorrow…? We must never forget what the nineteenth century German poet Heinrich Heine who once said in this regard: “Wherever they burn books they will also, in the end, burn human beings.”