Apostasy does not just happen overnight – it occurs step by step.

Little in life stays just the same. Change is normally a big part of the way things are. Therefore both individuals and nations can go forward or go backwards. They can make progress, improve and excel. But they can also go through stages of deep decline, deterioration and final extinction. 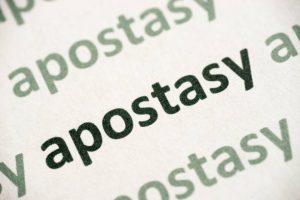 Here I want to look at how nations and individuals go backwards. Advancing, making progress and taking great leaps forward is hard work – whether for a culture or a person. But going in reverse is actually rather easy. It does not take much effort.

Planting a garden does take a lot of effort – letting it go to weeds requires nothing, really. It happens all by itself. Keeping a house in tip-top condition requires a lot of hard work. Allowing it to degenerate and fall into disrepair is easy – simply do nothing. It is the same with cultures and with individuals. Let me look at cases of each.

Nations can slowly and incrementally deteriorate and implode over time. They can die from within. While external threats are always a real worry to most nations, the really tragic fact is that so many cultures and countries actually die by suicide. Ethnocide or cultural genocide is not just due to dangerous external forces. Too often it happens because of internal factors.

And many astute commentators have warned about how nations can bring about their own demise. Three quotes will suffice here:

“A great civilization is not conquered from without until it has destroyed itself within. The essential causes of Rome’s decline lay in her people, her morals, her class struggle, her failing trade, her bureaucratic despotism, her stifling taxes, her consuming wars.” Will Durant

“America will never be destroyed from the outside. If we falter and lose our freedoms, it will be because we destroyed ourselves.” Abraham Lincoln

Nations seem to go through cycles. In 1857 Lord Macaulay sent a letter to an American friend, speaking about the fact that the average age of the world’s greatest democratic nations has been 200 years. He said that each has been through the following sequence:

From bondage to spiritual faith.
From faith to great courage.
From courage to liberty.
From liberty to abundance.
From abundance to complacency.
From complacency to selfishness.
From selfishness to apathy.
From apathy to dependency.
And from dependency back again into bondage.

A good question to ask is this: where is Australia – or America, or Britain, or France – in this cycle? It seems they all would be pretty near the end of it. How long the West can survive is a moot point. It is hard to believe that the moral and spiritual freefall can go on for much longer.

But it is not just entire nations and cultures that can commit hari-kari – individuals can too. How many people started out well, and their prospects looked so promising, only to lose it all? Many started out strong but disintegrated along the way. And I refer here to Christians as well.

Specifically, I refer to the act of apostasy – renouncing the very faith that was once championed. Those who once were leading lights in the church, who had very public ministries, and who had impacted many, will all of a sudden reject their faith.

But it only appears that this happened all of a sudden. Almost always this is an incremental rejection of the faith. It happens in little steps: a little compromise here, a little sin there, a little unbelief here, a little worldliness there, etc. Over time the end result must eventually occur: apostasy.

We see cases of this happening all the time. One quite shocking case of this involves a former American megachurch pastor. I wrote about this sad story not long ago: billmuehlenberg.com/2019/07/27/sin-and-deception-another-case-study/

It has to do with Joshua Harris. As I mentioned in my article, this big time Christian leader dumped not only his wife and family, but he dumped his faith as well. That is a clear case of apostasy. But wait, there’s more. He now seems to have taken up with the homosexual juggernaut. As one article begins the story:

Former pastor and evangelical author Joshua Harris demonstrated his support for the LGBT community by marching in Vancouver’s annual Pride Parade less than a month after announcing he no longer considers himself a Christian. On August 4, Harris, former pastor of Covenant Life Church in Gaithersburg, Maryland, shared several Instagram photos of himself participating in the British Columbia parade, engaging in Pride festivities, and “swapping stories” with LGBT activists.

“An American in Canada marching with the British Consulate in the Pride Parade,” he captioned one photo. Harris also shared a photo of himself alongside LGBT advocates, including Matthias Roberts, host of Queerology: A Podcast on Belief and Being, and gay rock singer Trey Pearson. “Enjoyed swapping stories, gentleman!” he captioned the photo.
www.christianpost.com/news/joshua-harris-marches-in-pride-parade-after-apologizing-to-lgbt-community.html

So now it seems his apostasy is just about complete. We can likely expect to see him next boasting about being a homosexual himself, and maybe even getting “married” to some guy. That is full tilt apostasy folks. That is rejecting Christ and Christianity about as far as you can.

Perhaps the only good thing that can be said about all this is that he gets it, at least somewhat: if he now wants to fully embrace or at least champion the homosexual lifestyle, then he must stop pretending that he is a Christian. We have far too many folks who still claim to be Christians while fully in the homosexual bed – metaphorically and literally.

But as I said in my previous piece, we need to pray for the guy. It looks like he has totally lost the plot and completely renounced Christianity. But it is possible that he may one day come to his senses, realise what a catastrophic mistake he has made, repent, and come back to Christ.

That we need to pray for. But in the meantime, he is as good a case of apostasy as you will find. It is as heartbreaking as it is diabolical. Lord have mercy on his soul.

19 Replies to “In the Final Stages of Apostasy”