Christians of all people should not be celebrating each new tragedy and disaster.

‘What? Rejoice when a tragedy happens? Who would do such a thing?’ Sadly there are various folks around who DO get rather excited when some disaster or great misfortune takes place. I can think of at least three groups that tend to do this.

One group would be masochists and others who simply get their kicks out of evil and suffering. They actually get cheap thrills out of such things. Another group would be some of the radical greens who claim that we are far too overpopulated and drastic steps are needed to cut back on the human population. Some even speak in glowing terms about plagues and the like to bring this about. 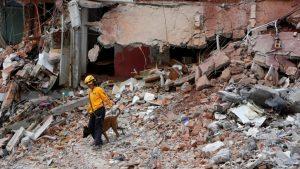 But there is a third group of people who can actually applaud each new case of disaster or tragedy: I refer to certain Christians who really should know better. Most of these are gung-ho prophecy and end-times buffs who seems fixated on the Second Coming of Christ.

According to their interpretation of eschatology, every time there is another disaster – be it an earthquake or a mass killing or a typhoon – they see this as another indication that the end is near. They think this is in fact good news because it means Jesus will soon return.

Thus they will cheer on every new calamity and disaster: ‘Oh goodie, the return of the Lord has just gotten much closer!’ ‘The prophetic clock is ticking away!’ ‘This is just what the Bible predicted!’ The truth is, this is a lousy attitude for Christians to take – and it is unbiblical as well.

Let me explain. Many of these folks will run with a few verses in Matthew 24 for their take on these things. But simply reading the passage in context should make us a bit more cautious. Consider what Matt. 24:4-8 actually says:

Jesus answered, “Watch out, and do not let anyone fool you. Many men, claiming to speak for me, will come and say, ‘I am the Messiah!’ and they will fool many people. You are going to hear the noise of battles close by and the news of battles far away; but do not be troubled. Such things must happen, but they do not mean that the end has come. Countries will fight each other; kingdoms will attack one another. There will be famines and earthquakes everywhere. All these things are like the first pains of childbirth.

I will not here look in detail at how we might exegete and interpret this passage. Perhaps in another article I will take on that challenge. Suffice it to say that different Christians have different understandings of just what is being said here. And there is some room to move here regarding these various views and interpretations.

But yes, Christians do look forward to the return of Christ. Yes, it is our blessed hope. But believers for two thousand years now have thought that the end was nigh. Can Christ return tomorrow? Yes that is possible. Might he not return for many decades or even centuries? Yes that is possible as well.

We just do not know for sure when he will return. Jesus himself said no one knows the day or the hour. And Jesus said that we are to occupy till he comes. So we are to stand against evil as best we can. We are not to allow end-times speculation to render our witness ineffective and salt-less.

Keeping busy with the work of the Kingdom is part of what it means to be salt and light. We have a job to do and should not let eschatological theories interfere with that. But I have written about this in more detail here: billmuehlenberg.com/1999/04/08/end-times-and-christian-responsibility/

Furthermore, rejoicing when a tragedy happens is not exactly reflecting the love of God and his patience with humanity (but more on this in a moment). It is not reflecting the broken heart of God. It is not demonstrating any sort of empathy for others.

When a tragedy strikes, resulting in the death of many, we should be grieved, and we should be praying for those affected. We should not be celebrating or rejoicing or gloating. Simply consider if your own loved ones were impacted by some tragedy.

Unless you are some glib Christian who says, ‘Nah, no big deal – they are in heaven now so that is all that matters,’ you will grieve and mourn and hurt. We should not just feel that way about friends and family members, but about others as well.

I mentioned three groups who might delight in disasters and the like. There can actually be a fourth group, properly understood. But we need to be real careful here. In Scripture we do have cases of God’s just judgment on the wicked. And at times God’s people can indeed be glad that justice is being done, and that God is taking steps to deal with evil.

When Moses and the people of Israel were delivered from Egypt, and made it through the Red Sea while Pharaoh and his troops did not, Moses did sing praises to God for this delivery. The first 14 chapters of Exodus give us an account of this amazing exodus, and then we have the Song of Moses in Ex. 15:1-18. And in Ex. 15:19-21 we have the Song of Miriam.

Both sing praises to God concerning the victory over the oppressive Egyptians. Let me just give the first six verses:

Then Moses and the Israelites sang this song to the Lord:
“I will sing to the Lord, because he has won a glorious victory;
he has thrown the horses and their riders into the sea.
The Lord is my strong defender;
he is the one who has saved me.
He is my God, and I will praise him,
my father’s God, and I will sing about his greatness.
The Lord is a warrior;
the Lord is his name.
“He threw Egypt’s army and its chariots into the sea;
the best of its officers were drowned in the Red Sea.
The deep sea covered them;
they sank to the bottom like a stone.
“Your right hand, Lord, is awesome in power;
it breaks the enemy in pieces.

We find similar things after the Jews were saved from a murderous plot as recorded in the book of Esther. As we read there, through a remarkable series of events the Jewish people were saved while their enemies were destroyed. In chapter 9 we read about the outcome of this, and the celebrating that took place.

It was “a joyous holiday, a time for feasting and giving gifts of food to one another” (v. 19). The Feast of Purim is inaugurated, celebrated to this day by devout Jews. One more example: in the book of Revelation we find similar things.

So at times the people of God can indeed rejoice with their Lord that great evil has been defeated and that God’s enemies have been routed. But we need to be careful here. For specifics, see what I have said in the two articles mentioned just above.

In sum, believers need to be much more circumspect when it comes to current events. We do not know with certainty if each new disaster is part of some prophetic countdown, and we do not know if these things are acts of God’s judgment.

By all means seek and pray for the Parousia. We should indeed rejoice in the knowledge that Christ will return one day. But please do not gloat and celebrate every time some new disaster strikes. It is a pretty bad look and not a great testimony for our Lord.

10 Replies to “Rejoicing in Calamities and Disasters”