What is behind these mass killings in the West?

Whenever some crisis or problem arises, many people think there can be only one solution: the government needs to do something about it! Such is the state of affairs today that no matter what the issue, we first think that the government can and should step in and take charge.

Even things which we normally would have thought the government has little or no control over – such as the weather and climate – we now think that governments can somehow magically solve. We really believe that the state can fix every problem and right every wrong. Government has taken the place of God in being able to deal with all of life’s misfortunes, problems and woes. 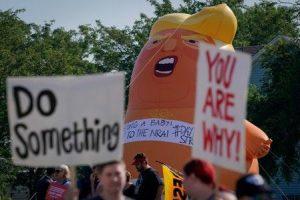 But the truth is, governments cannot solve many of the problems that we face today. Indeed, we need to think this through even further: while governments often cannot save us from the various problems we face, they can often get us into such problems, or at least greatly contribute to them.

As Dr. Ben Carson once put it, “We’ve been conditioned to think that only politicians can solve our problems. But at some point, maybe we will wake up and recognize that it was politicians who created our problems.” Or as Ronald Reagan rightly said, “The nine most terrifying words in the English language are: ‘I’m from the government and I’m here to help’.”

He was even more blunt when he said this: “Government is not the solution to our problem, government is the problem.” And Thomas Sowell once put it this way: “No one will really understand politics until they understand that politicians are not trying to solve our problems. They are trying to solve their own problems — of which getting elected and re-elected are number one and number two. Whatever is number three is far behind.”

With more mass shootings in the US over the weekend, we have heard more of these calls for the government to step in and solve all these problems: “The government must act now!” “When is Trump going to do something about this?” “Why is Washington not fixing this?”

But this is another clear case of not only something that governments can not really solve, but of governments contributing to the problem in the first place. Sure, what many folks want is simply for the government to rescind the 2nd Amendment, or at least greatly curtail it.

This is not the place to go into a detailed discussion of the right of Americans to keep and bear arms, but a few quick points can be mentioned. The cities with the highest gun crime and gun murder rates happen to be in the cities with the strictest gun control laws in place.

For example, over the weekend some 60 people were shot in Chicago – a Democrat-controlled city with strict gun laws. Most of the other big cities with big gun problems are also run by Democrats, and also have strict firearms legislation in place. But some folks seem to think that if we just have even more gun control, all our problems will be solved.

But the truth is, the real problems are much deeper and much harder to fix than merely with quick solutions and legislative changes. Most of the mass shooters in the US have shared a number of traits: most have been raised in father-absent homes. Most have had mental health issues. Most have had drug problems. And of course most are spiritually adrift.

And all these issues have been caused by governments, or at least greatly exacerbated by governments. For example, the state has not just kicked God out of the classroom, but it is increasingly hounding him out of the country, and out of our lives. As the state becomes more and more secular and anti-God, we can see the bitter fruit of this in so many areas.

Broken families and fatherless homes is another primary example of how the government is making things worse. The welfare state is a classic case in point. Black families especially have been decimated by this. Only a minority of Black children grow up in a home with a biological mother and father today. And white families are catching up to this.

Welfare dependency contributes to the problem of out-of-wedlock pregnancies. After all, if you can get far more government handouts if you are a single mother than if you are in an intact, married heterosexual family, why not go for the free stuff?

So we have unprecedented numbers of children being raised in broken or fractured families, with record numbers of kids not having a biological father in their life. The social science research on the harmful effects of these less than ideal family structures has been documented for many decades now. But governments are not interested in addressing those sorts of core problems.

Of course we have also declared war on morality – certainly on absolute morality. Ethics is now all about our own personal preferences and feelings. We have told young people for decades now that there is no right and wrong, and they should just discover for themselves what is the best thing to do.

Governments have greatly contributed to this, whether by allowing open slather on pornography; allowing easy no-fault divorce; ravaging families by family-unfriendly tax systems; pushing secular public education which has long ago removed morality from the classroom; force-feeding the agendas of the radical activists, such as the homosexual and transgender lobbies; and so on.

And recall that under the Kennedy and Johnson administrations it was decided that it was wrong to keep the mentally ill in asylums and institutions. So they were basically just all dumped on the streets, and we are still dealing with that crisis today.

Thus it would be foolish to claim that the shootings we find happening in the US today are solely due to the availability of firearms. For many decades – even centuries – such firearms were readily available, yet we had hardly any problems with mass shootings and the like. Now in the past 15 to 20 years we have had a number of these incidents.

There are much deeper problems behind all this. Fractured families, the increased secularisation of society, the relativism of morality, and the inculcation of a me-first generation have all contributed to this. We have an entire generation of young people with a hole in the soul.

Indeed, the Christian takes things even further. If someone murders someone, that is obviously wrong – and sinful. But Jesus took things to another whole level when he said that if you hate someone, it is the same as murdering them. Jesus dealt with the root causes: the sinful human heart.

Guess what? Governments cannot fix that. Only the gospel of Jesus Christ can deal with those sorts of core issues. But most Western nations have been working overtime to expel God from the public square. And they have largely succeeded. And now we wonder why we have so many seemingly intractable social problems.

Sure, governments do have a role to play – at least to some extent. They can reverse longstanding policies that lead to the breakup of marriages and families. They can get serious about things like violent pornography and violent video games which have all contributed to these shootings somewhat. They can call off their war on religion in the public square.

But the real issues will take much more than a quick fix from the government. And as long as people think the government will be able to fix all our problems, they will continue to be disappointed. At bottom, our problems are moral and spiritual.

And those sorts of problems require moral and spiritual solutions.

8 Replies to “You Must Do Something About This!”