What is the main reason that we keep losing in the culture wars?

We are being attacked on all sides. Those who hate everything we believe in and cherish are working 24/7 to see our way of life replaced with their vision of what society should look like. That in large measure explains why the West is so far down the gurgler. It really is getting close to rock bottom. 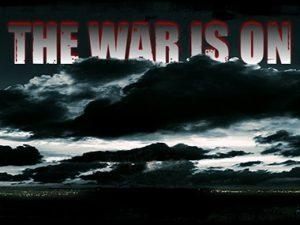 But there is at least one more reason – a very significant reason – why we keep losing. Those who are most at risk here, who are most under threat, who are being targeted the most here – they are largely dead silent. They are saying nothing. They are doing nothing.

They are just sitting there as all that they hold near and dear is being wiped out right before their very eyes. And the number one group that is guilty of this is the Christian church. These assaults are ultimately about one thing: silencing, if not destroying, biblical Christianity.

Yet most Christians and most churches and most pastors and most religious leaders are doing absolutely nothing about the wars they find themselves in. They are just sitting there, pretending none of this is happening. Or they are giving atrocious copouts such as: ‘Christians should not be involved in politics,’ or ‘the Bible says things will get worse,’ and so on.

I have written plenty of pieces dealing with these useless cop-outs. Here are three of them:

In the past week I have dealt with a perfect example of all this. Allow me to tell the story. It happens to be a rather personal one in fact. It involves my hometown in America, and some old hippy friends of mine. Let me give a bit of background:

The sleepy and rather conservative small town in Wisconsin where I was born has never seemed to be a prime candidate for leftist activism. Sure, in my wild youth as a leftist hippy I did my bit to change the town. But I became a Christian in 1971 so left off trying to radicalise the place.

And soon after that some of my hippy friends also became followers of Christ. Incredibly I got to return there just a few months ago, and had a glorious reunion with some of these folks. You can read all about it here: billmuehlenberg.com/2019/05/15/how-great-thou-art-hippies-and-a-gracious-god-50-years-on/

But it seems that this small town has now fully gotten on board with leftist politics and the radical homosexual agenda. And it took one of my old hippy friends to alert me to this. Around four days ago he sent me this email:

Bill, in tonight’s Sheboygan Press: “Sheboygan Common Council could ban conversion therapy on minors next week”. Any ideas on how to stop this from passing?

It seems the city is now in the hands of radical loony lefties. The piece opens:

The Common Council will vote Monday night on an ordinance that would ban the practice of conversion therapy on minors in the city of Sheboygan if passed. Conversion therapy is defined in the ordinance as any practices or treatments offered for a fee that try to change a person’s sexual orientation or gender identity “including efforts to change behaviors or gender expressions or to eliminate or reduce sexual attractions or romantic attractions or feelings towards individuals of the same gender.”

It doesn’t include counseling for someone undergoing gender transition.

If the ordinance passes, anyone practicing conversion therapy on someone under 18 for a fee will be referred to the state’s Department of Safety and Professional Services, which regulates therapy services and professional counseling. “It’s a personal issue for me,” said Alderperson Betty Ackley. Ackley has a child who identifies as a member of the LGBTQ community and she’s also written papers on the topic in her classes at UW-Green Bay where she is studying psychology, she said.

Good grief. This is what I wrote back to my old friend:

Thanks ****. Well, concerned folks need to contact them and speak out. If you know of ex-homosexuals, they are helpful in sharing their testimony. And churches and church leaders, pastors and counsellors all need to be alerted to this, and made aware of how this will directly impact them. But I have written often on why these laws are bad news:

A few days later he again emailed me:

Bill, here’s a link to a copy of the actual ordinance ban the city council of Sheboygan plans to possibly vote on tonight. PLEASE NOTE THAT 4 OF OUR 10 ALDERMEN HAVE ALREADY SIGNED THE BILL, and 5 of the 10 aldermen helped in the creation of it. They only will only need 2 more votes to pass the ordinance through.

He followed that up with another email:

I’ve thought of possibly reading this speech at the city council tonight. I’m trying to focus on the actual proposed ordinance itself. But, I am not a lawyer so I don’t really know if it would change anything.

My reply was this:

Thanks **** and well done. I am not a lawyer either, but it is always worthwhile to speak up in cases like this. Get others to join you as well. They can make use of the articles I sent the other day. It is important to speak up – we then leave the results up to God.
Thanks for standing strong champ.

And just now I got this sad email:

Bill, just got back from the city council meeting and I am sad to report the ban has been voted to pass, 6 to 4. Guess we will need to lean on Jesus more now.

Wow. I sent this reply back to him:

Thanks again. The truth is, the churches there should have been on to this and fighting it – were any? Well done to you sir, but were any other Christians in this battle? As long as churches and Christians are sleeping through the revolution, things will keep getting worse. But I have been making these warnings for decades now!
Bless ya.

That last reply of mine was sent minutes ago. So I await his answer to that one. It is slightly possible that I will be pleasantly surprised. He may write back and say that dozens of churches banded together to fight this diabolical law, and that large groups of Christians were protesting outside the Council, and numerous submissions and letters were sent in, and so on.

Um, why do I think this will NOT be the case. Again, I am open to being proven wrong, but I have a horrible feeling that this old hippy friend of mine may have been a sole voice in this battle. One concerned citizen, in a town of some 50,000 people.

There would be dozens of churches there. Who knows, perhaps a third of the folks living there still attend church. So why was there not a huge outcry about this? Are these Christians so utterly clueless? Do they not know that a law like this will directly impact upon them?

Christian pastors, counsellors and others will all be at risk. And those struggling with unwanted same-sex attractions will have nowhere to turn to. We expect that places like San Francisco or Sydney or Amsterdam will push these draconian anti-Christian laws which will leave those seeking help in the lurch. But a small midwestern town?

So how did my friend know all about the dangers of such a bill? Well, he is switched on, and if I may say so, I know he also often comes to my site and reads the articles. So he is aware of what is going on. He is aware of how great the stakes are.

But were any other Christians in this Wisconsin town even remotely aware of how serious this law change would be? Indeed, did they even know that the issue was being discussed? And if they did, did they care? Did it bother them and spur them to action?

My friend cared and he sprang into action. He even went to the council to share his concerns. That man is a hero in my books. And if he went there alone, without the support of other Christians, then he is even more of a hero. Well done sir. I salute you, even if no one else does.

As mentioned, he may send me a reply and prove me wrong. But I am not really convinced that I will have to eat humble pie here. And I am not picking on this one city. What happened in that small town is happening all over the West: the militants have declared war on faith, family and freedom, and the great majority of Christians do not know or do not care.

That is why we keep losing my friends. The other side is switched on, is active, is concerned, is involved, and is working overtime to bring about the revolution. But our side is asleep at the wheel. We don’t seem to give a rip. We just could not care less about the culture wars engulfing us and our churches.

And by the time Christians do finally wake up, it will be too late. This is how nations and cultures die. And it is mostly our own fault.

20 Replies to “This Is Why We Continue To Lose”