The words of warning given by Jeremiah to ancient Israel seem to be fully needed in today’s church.

If you don’t believe me, simply have a read of Jeremiah 7. This chapter is all about how worthless false religion is. And it was written to God’s own people – not to pagan nations. That message is as relevant today to the Christian church as it was back then to ancient Israel. 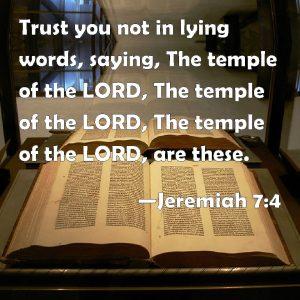 One can easily change things around a bit

Will you allow abortion, promote homosexuality and fake marriage, push interfaith dialogue with other gods you have not known, and then come and stand before me in this house, which bears my Name, and say, “We are safe”—safe to do all these detestable things? Has this house, which bears my Name, become a den of robbers to you? But I have been watching! declares the Lord.

All this and more can be mentioned. And then we seem to have one case after another of high-flying Christian leaders renouncing the faith and turning their backs on the Lord. What are our churches doing that we are producing so many Christian pastors and others who are leaving the faith – and often leaving their families as well?

As but one recent example, I wrote about Joshua Harris last week: billmuehlenberg.com/2019/08/06/in-the-final-stages-of-apostasy/

And this week we have a Hillsong worship leader also embracing apostasy: www.christiantoday.com/article/hillsong-worship-leader-marty-sampson-losing-faith/133017.htm

When things get so bad and so many believers are bringing shame and disrepute on the Lord by denying the clear teachings of Scripture on so many matters, then we need to go back and listen to the prophets. And a fellow prophet, Isaiah, made it quite clear what God thinks of worthless religion:

“Stop bringing meaningless offerings! Your incense is detestable to me. New Moons, Sabbaths and convocations— I cannot bear your worthless assemblies. Your New Moon festivals and your appointed feasts my soul hates. They have become a burden to me; I am weary of bearing them” (Is. 1:13-14).

All of the corruption, compromise and carnality found in the church today makes the words of Jer. 7 all the more relevant. We need to listen carefully to what the prophet said. So let me return to the Jeremiah passage I quoted above.

And even more remarkable, just below the passage, Jeremiah is told to not pray for the people. As verse 16 says, “So do not pray for this people nor offer any plea or petition for them; do not plead with me, for I will not listen to you.” Wow, they were so far gone that he could not even pray for them anymore.

And also bear in mind that Jesus quoted from this passage (v. 9) when he cleansed the temple (Matthew 21:13; Mark 11:17; Luke 19:46). So this is not just some irrelevant bit of Old Testament teaching, but something relevant for New Testament times as well.

Let me round things off here by offering some commentary on Jeremiah 7. Philip Graham Ryken offers these remarks:

Religious observance without moral obedience cannot save. John Calvin put it like this: “Sacrifices are of no importance or value before God, unless those who offer them wholly devote themselves to God with a sincere heart.” It can be stated even more briefly: Those who seek justification without sanctification need reformation.

The first thing to understand about Jeremiah’s message is that it was delivered to a religiously observant people. Jeremiah was preaching to people who were on their way to the temple to offer sacrifices to God. The people he told to mend their ways were devout. They were “churchgoers.” They wore their Passover best and had their scrolls tucked under their arms.

Reformation always begins with the people of God. Reformation is something that starts in the church. . . . The people of Judah were in desperate need of reformation because they had put their trust in the outward trappings of religion.

Michael Brown also says this about the text:

[The Israelites] mistake God’s patience for his approval, as though his longsuffering gives them a further license for sin—a theme addressed in the NT in the context of the misuse and abuse of God’s mercy and grace (cf. Jude 4a, speaking of “godless men, who change the grace of our God into a license for immorality and deny Jesus Christ our only Sovereign and Lord”; see also Ro. 2:4; note Ps. 50:16-20; Ecc. 8:11).

Thus by their mere presence in the temple they superstitiously suppose they have proof of their right standing with God and/or their ongoing immunity from punishment, little knowing they are only sealing their own doom.

Lastly, Christopher Wright deals with a problem some folks might have here: the seeming contradiction between the unconditional promises of the land, and the very conditional warnings of the need for obedience to remain in the land. He writes:

The tension, in other words, is the fully biblical relationship between grace and obedience. The land was an unconditional gift of grace. Ongoing life in the land required an obedient response to that grace. Obedience was never the means of earning the land. But it was the condition in which the grace-gift could be possessed and enjoyed. Grace comes first. Obedience must come second. The principle resounds through the Old Testament and on into the teaching of Jesus and the apostles.

This is a crucial balance that corrects two false assumptions. On the one hand, it rules out legalism and merit. We do not, we cannot, earn our way to God’s favour and blessing. We receive God’s gift of grace as the only basis for our relationship with him. But on the other hand, it rules out the idea that once you have got God’s promise tucked away, it doesn’t matter how you live. Obedience is the only way to enjoy the blessing of God’s promise.

The message of Jeremiah to the Israelites is also a message to the church. Simply rolling up at church, singing a few songs, raising your hands, putting in an offering, repeating Bible verses and so on is no guarantee that you are one of His. Especially if you are condoning or promoting things like baby killing and the war on marriage.

Simply relying on an emotional commitment you may have made to the Lord many years ago also does not cut it. Unless there is abiding, continuous fruit in your life, then one must question whether such a commitment was the real deal to begin with.

It certainly is time for judgment to begin with the household of God. All the sin, immorality, false teaching and apostasy we see in so many places is part of the divine sifting process. And that is a good thing. But the crucial questions that we all must ask ourselves are these: ‘Am I one of the sheep or one of the goats?’ ‘Am I the wheat or the tares?’