We were clearly warned about this brave new world:

In the 1930s and 1940s two parallel movements were arising: cultural Marxism, and those warning about tyrannical statism. As to the latter, we had dystopian novels penned by Aldous Huxley (Brave New World – 1932) and George Orwell (Nineteen Eighty-Four – 1949). They could see where the totalitarians were taking us.

As to cultural Marxism, last week in several capital cities I spoke about it and how it is using sex as a political weapon. I mentioned how the cultural Marxists and the Frankfurt School drew on both Marx and Freud as it fomented revolution against the West. 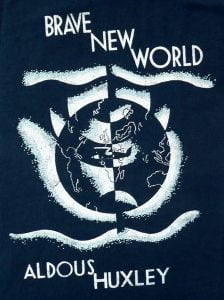 Folks like Austrian psychiatrist Wilhelm Reich could write books like The Sexual Revolution (1936), and German-American philosopher Herbert Marcuse could pen Eros and Civilization (1955). Marcuse was one of the leading theorists of the New Left in the 1960s. He had an enormous influence on theories of sexual liberation and the homosexual movement.

In an article I penned over a decade ago I quoted Timothy Matthews on this:

One of the main ideas of the Frankfurt School was to exploit Freud’s idea of ‘pansexualism’ – the search for pleasure, the exploitation of the differences between the sexes, the overthrowing of traditional relationships between men and women. To further their aims they would:
-attack the authority of the father, deny the specific roles of father and mother, and wrest away from families their rights as primary educators of their children.
-abolish differences in the education of boys and girls
-abolish all forms of male dominance – hence the presence of women in the armed forces
-declare women to be an ‘oppressed class’ and men as ‘oppressors’ billmuehlenberg.com/2009/05/11/the-frankfurt-school-and-the-war-on-the-west/

Today we see everywhere the bitter fruits of all this – the very things warned about by Orwell and Huxley. We really are now in a brave new world and Big Brother really is in control. As noted in my review of Michael Brown’s new book, the evil twin sisters of immorality and idolatry are rearing their heads big time today: billmuehlenberg.com/2020/03/02/a-review-of-jezebels-war-with-america-by-michael-brown/

I keep offering examples of this, and each new week gives us more appalling examples of these assaults on faith, family and freedom. Consider five more recent cases which really should snap us all out of our apathy and indifference.

The first comes from California where new laws are effectively telling us male and female may soon become outlawed and a thing of the past. The article opens:

If a California lawmaker has his way, children’s stores will be a gender-free zone, with nothing labeled as meant for boys or girls. It’s more than wanting to boost sales of GI Joe to girls and using state power to determine store layouts. According to the text of the proposal posted by The Blaze, Assembly Bill 2826 requiring sex-neutral children’s sections of retail stores with at least 500 employees applies to childcare articles, toys and clothing “including under and outer garments.”

“A retail department store shall maintain one, undivided area of its sales floor where, if it sells childcare articles, all childcare articles, regardless of whether a particular item has traditionally been marketed for either girls or for boys, shall be displayed,” reads the text of the bill. www.washingtontimes.com/news/2020/feb/27/california-bill-would-require-gender-neutral-toy-c/

Case two has to do with a high school in my home state of Wisconsin. It demonstrates the ongoing madness of the trans agenda and how unsafe it really is:

An 18-year-old Wisconsin high school student was arrested last week after an alleged incident in the gender-neutral bathroom of Rhinelander High School in Rhinelander, Wisc. WSAW-TV reported Austin Sauer was arrested for child enticement, fourth-degree sexual assault, and exposing genitals to a child, according to the Oneida County Sheriff’s Office. Details about the victim’s age and gender were not released.

Captain Terri Hook told the station the alleged incident happened in the gender-neutral bathroom of the school and the high school has closed the restroom. Hook said the school did not send a message to parents as it was an isolated incident and the student was removed from the school. WAOW News reported Sunday that Sauer was released on a $1,500 bond. So far, he has not been charged. www1.cbn.com/cbnnews/us/2020/march/wisconsin-high-school-closes-gender-neutral-bathroom-after-alleged-sexual-assault

My third case takes us to Norway. It is a clear example of Big Brother in action:

Natalya Shutakova is calling on U.S. officials, including President Trump, to help free her American-born children from the clutches of the Norwegian Child Protective Services, also known as the Barnevernet. The Barnevernet is one of the worse violators in the world of family rights. “I would really ask U.S. officials to look into this situation. I would warn everyone who thinks of traveling to Scandinavian countries, you don’t want to get trapped. And it’s a trap. It’s nearly impossible to get out of this.”

Shutakova is a Ukrainian-born naturalized American citizen who grew up in Atlanta. In September of 2018, she was living with her husband and three children in southern Norway while he was on a temporary work contract. In May of the following year, the Barnevernet knocked on the couple’s door and removed her kids from their beds to take them to foster care. Shutakova and her husband were alleged to have been guilty of child mistreatment.

The charges stem from a situation that arose after the pair’s 11-year-old daughter was misusing her iPhone. They took the phone away as punishment. As a result, she went to school the next day upset. The school called Natalya because her daughter didn’t have a lunch. Natalya knew she packed a lunch in her daughter’s backpack, so she went to the school. The daughter realized she’d been caught in a lie, and told her teacher she was going to get in even more trouble when she got home, a claim which she later recanted in a video. www.lifesitenews.com/news/american-mom-begs-trump-to-help-free-her-children-from-norways-child-protective-services

The fourth case also comes from Europe and shows how the war on children continues unabated:

A sci-fi film out of Germany has sparked controversy and severe backlash for depicting a relationship between an adult man and a 10-year-old robot designed to resemble his daughter. The outrage has prompted walkouts at several of the film’s screenings. “Titled ‘Trouble With Being Born,’ the film is programmed as part of Berlinale 2020, the annual film festival held in Berlin, Germany,” reports the Independent. “In the film, the child-like android, played by Lena Watson, 10, is seen calling her owner ‘Daddy.’”

Though the movie features no graphic depiction of sex between the man and the girl sexbot, the implications are clear. “The android role was originally written for a 20-year-old actor, but after removing some of the more explicit elements, director Sandra Wollner decided to cast a child,” continued the report. People on Twitter have objected to the film as “pedophile propaganda” while certain outlets like The Hollywood Reporter (THR) have hailed it for its artistic merits. www.dailywire.com/news/germany-film-depicts-adult-man-in-a-relationship-with-a-10-year-old-robot-people-walk-out-of-screenings

Finally, more fallout from the trans tsunami crushing everyone in its path:

Employers all across Virginia could soon be forced to provide health insurance plans that cover unnecessary and harmful “transition-related care” for “transgender individuals” who seek to physically alter their bodies to more closely resemble the opposite sex. This would include “hormone replacement therapy” and even “gender reassignment surgeries” to mutilate or remove perfectly healthy body parts, and would be made available to both adults and children!

Tonight, a Senate committee passed HB 1429 (D-Roem) to do just that, as they ignored legitimate concerns raised by our team. Now the bill heads to the full Senate for a vote. Additionally, this radical bill dramatically expands upon the standard claim of “gender identity” (which claims that a person can change from male to female, or vice versa) to now define it as “an individual’s internal sense of gender, which may be male, female, neither, or a combination of male and female.”

This bill allows anyone to identify as part male and part female (of presumably any ratio), or even some unspecified third option entirely! Meanwhile, it remains completely unknown what any of that even means or what it implies about how such persons must now be accommodated. www.familyfoundation.org/blog-posts/employers-forced-to-pay-for-kids-transgender-surgeries

Hmm, have we learned any lessons yet? Or will we allow things to keep getting worse? It’s your call.