Does this verse teach that the church, and not the Bible, is the real ground of truth?

If you are aware of some of the key differences between Protestant beliefs and Catholic beliefs, this verse would be well known to you. The two groups have quite different understandings of what this text is saying. Let me offer it, along with the preceding verse:

“Although I hope to come to you soon, I am writing you these instructions so that, if I am delayed, you will know how people ought to conduct themselves in God’s household, which is the church of the living God, the pillar and foundation of the truth.”

I deal with this passage now because of a recent debate that took place on my social media page. I had shared a meme about how one popular phrase is not all that helpful. Indeed, years ago I did a critique of it: billmuehlenberg.com/2011/12/15/if-necessary-use-words/ 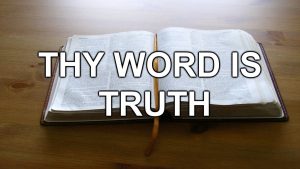 But some Catholic decided he wanted to pick a fight over it (this despite my repeated pleas to take sectarian battles elsewhere!). The two radically different interpretations of this verse can be seen in what this guy posted: “the Church is truth not the bible. Even the bible says that.” While it is hoped that some other Catholics might offer a slightly more nuanced and better thought-through response than this, it does illustrate a very big difference in theology.

Scripture does not hold the same place for Catholics as it does for Protestants. Sola Scriptura means that the Bible alone is our ultimate source and ground of truth. Sure, no real Protestant denies that there is a place for tradition and church teaching properly understood. We do accept the importance of the early creeds, noted past theologians, and so on.

We just do not consider them to be inspired, infallible and fully authoritative. Only the Bible is seen in that light. So this guy was running with standard Catholic teaching. So how does a Protestant respond to his use of this passage? Does it teach what he thinks it teaches?

Let me first start with what the guy had said. My first reply to his ludicrous claim was simply to quote John 17:17: “Your word is truth.” So was Jesus lying when he referred to God’s word as truth? The Bible repeatedly says that God’s words are truthful, reliable, authoritative and without error. Here are just a few more passages:

-2 Samuel 7:28 And now, O Lord God, you are God, and your words are true.
-Psalm 19:7 The law of the LORD is perfect, reviving the soul. The statutes of the LORD are trustworthy, making wise the simple.
-Proverbs 30:5 Every word of God is flawless.
-John 10:35 Scripture cannot be broken.

Let me return to the passage in question. One thing worth looking at are the two Greek words translated as “pillar” and “foundation” in the NIV. As to the second word, it is often – and perhaps better – translated as bulwark or buttress. These things help support and stabilise the whole building. As John Stott remarks: “Just so, the church is responsible to hold the truth steady against the storms of heresy and unbelief.” He goes on to say this about the pillar or column:

The purpose of pillars is not only to hold the roof firm, but to thrust it high so that it can be clearly seen even from a distance. The inhabitants of Ephesus had a vivid illustration of this in their temple of Diana or Artemis. Regarded as one of the seven wonders of the world, it boasted 100 Ionic columns, each over 18 metres high, which together lifted its massive, shining, marble roof. Just so, the church holds the truth aloft, so that it is seen and admired by the world. Indeed, as pillars lift a building high while remaining themselves unseen, so the church’s function is not to advertise itself but to advertise and display the truth.

And as always, we must compare Scripture with Scripture. If the passage in question was the only verse we have about truth, then perhaps the Catholic take on it might be possible. But we have many other verses of course. One very important text is Ephesians 2:19-22 in which Paul also uses building imagery for the church:

Consequently, you are no longer foreigners and strangers, but fellow citizens with God’s people and also members of his household, built on the foundation of the apostles and prophets, with Christ Jesus himself as the chief cornerstone. In him the whole building is joined together and rises to become a holy temple in the Lord. And in him you too are being built together to become a dwelling in which God lives by his Spirit.

Clearly the teaching of Jesus and the apostles is being referred to here by Paul. This is the foundation of the church. Yes of course the church becomes a repository of the truth – it shares the truth. But no human or ecclesiastical pronouncement is the inerrant truth: only God’s word is, which we are called to share, to proclaim, and to defend.

Indeed, in 1 Corinthians 3:10-11 Paul says this: “By the grace God has given me, I laid a foundation as a wise builder, and someone else is building on it. But each one should build with care. For no one can lay any foundation other than the one already laid, which is Jesus Christ.”

The words and teachings of Jesus and the apostles are again seen as being the real foundation. Philip Graham Ryken offers this comment: “The ultimate bedrock of the church is the Word of God spoken by the prophets of the Old Testament, written by the apostles on the New Testament, and made incarnate by God’s own Son. . . . . Over against the Roman Catholic view that the church determines the truth, the bible teaches that the church displays the truth.”

While much more can be said on this, let me offer a few brief remarks about how Protestants understand the notion of sola Scriptura and why they reject the Catholic understanding of the place of tradition. In Roman Catholics and Evangelicals (Baker, 1995), Norman Geisler and Ralph MacKenzie say the following about this:

The Bible teaches sola Scriptura. Two points must be made here. First, as Catholic scholars themselves recognize, it is not necessary that the Bible explicitly and formally teach sola Scriptura in order for this doctrine to be true. Many Christian teachings are a necessary logical deduction of what is clearly taught in the Bible….

Second, the Bible does teach implicitly and logically, if not formally and explicitly, that the Bible alone is the only infallible basis for faith and practice. This it does in a number of ways….

The fact that Scripture, without tradition, is said to be “God-breathed” (theopneustos) and thus by it believers are “competent, equipped for every good work” (2 Tim. 3:16-17) supports the doctrine of sola Scriptura….

Third, Jesus and the apostles constantly appealed to the Bible as the final court of appeal. This they often did by the introductory phrase, “It is written,” which is repeated some ninety times in the New Testament….

What is more, Jesus made it clear that the Bible was in a class of its own, exalted above all tradition. He rebuked the Pharisees for not negating the final authority of the Word of God by their religious traditions, saying, “And why do you break the commandment of God for the sake of your tradition?…

In addition, the Bible constantly warns us “not to go beyond what is written” (1 Cor. 4:6). This kind of exhortation is found throughout Scripture….

Finally, although written revelation was progressive, both Catholics and Protestants agree that normative revelation ended by the time of the completion of the New Testament. Indeed, Jesus told the apostles he would lead them [not their successors] into all truth (John 14:26; 16:13).

In sum, Protestants understand this passage quite differently than Catholics do. But I will need to do further articles on the place of tradition, the doctrine of sola Scriptura, and the authority of Scripture, to make all this even clearer. So stay tuned.