Here are some spiritual and historical considerations to keep in mind during these turbulent times:

With Coronavirus occupying everyone’s attention (and you know it is serious when most folk’s favourite sporting events are being cancelled), the Christian has a unique way of looking at things – especially if we keep history in mind. There have been plenty of plagues and outbreaks of disease over the centuries, so we need to recall what has happened before. 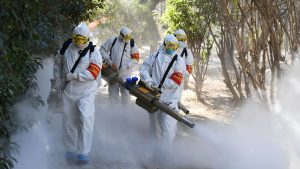 As one example, consider the Black Death that ravaged Asia and Europe in the mid-1300s. This pandemic of the bubonic plague was responsible for 75 to 200 million deaths. To keep things in perspective, so far Coronavirus has claimed some 5000 lives.

And recall the 2009-2010 swine flu (influenza) pandemic which occurred under Obama’s presidency in the US. Some 60 million people were infected, 300,000 people were hospitalized, and around 18,000 died. The media back then did not hype it up like they are now, and Obama was not condemned for how he dealt with it.

Christians also need to keep history in mind as they consider how to respond to such things. Indeed, a faith informed by what has gone before is crucial at times like this. Many historical lessons could be mentioned here, but let me focus on three of them.

Some of you who are familiar with church history will know that one of the reasons why the early Christians were so successful in spreading the faith had to do with how they dealt with things like plagues and pestilence. As I said in an article some years ago, some are

suggesting that the believer must either preach the gospel, or engage in acts of social service, as if one cancels out the other. But it is not a case of either/or, but both/and. Indeed, whenever the gospel was proclaimed around the world, the two have normally gone hand in hand. Christian missionaries preached the gospel and lived the gospel. They told people about Jesus and they also established hospitals, set up schools, helped feed the poor, challenged inhumane customs, and lived the gospel out in the eyes of the non-believers.

Indeed, many have noted that one of the main reasons why the early church was so successful in expanding was because the Christians saw no separation between telling people the good news and living it out in very practical and life-affirming ways. For example, when a plague or pestilence would sweep through an area, many would flee, but the believers would remain and minister to the sick and dying. That is why the early faith expanded so rapidly. It was a whole gospel presented to the whole person. billmuehlenberg.com/2007/10/29/the-church-the-state-and-social-responsibility/

Among others, historian Rodney Stark has covered this, especially in his important 2011 book, The Triumph of Christianity. Chapter Six, “Misery and Mercy” looks at this in some detail. He notes how compassion, pity and mercy were far from pagan virtues – in fact, they were often looked down upon.

In contrast, the Christians showed these traits in abundance, and in very practical ways during times of crisis. When plagues broke out, those who could (usually the wealthy), simply fled the area. Those who could not flee were aware of contagion, so they often just had victims “thrown into the streets, where the dead and dying lay in piles.”

While the pagan gods had no concern for human suffering and misery, the Christian God certainly did. Thus instead of deserting the sick, Christians stayed and cared for them. Christian help and nursing led to reduced mortality and showed the very real contrast between Christianity and paganism. Countless people would have turned to Christianity as a result. Writes Stark:

What went on during the epidemics was only an intensification of what went on every day among Christians. Because theirs were communities of mercy and self-help, Christians did have longer, better lives. This was apparent and must have been extremely appealing. Indeed, the impact of Christian mercy was so evident that in the fourth century when the emperor Julian attempted to restore paganism, he exhorted the pagan priesthood to compete with the Christian charities….

It was not that the Romans knew nothing of charity, but for them it was not based on service to the gods. Since pagan gods required only propitiation and beyond that had no interest in what humans did, a pagan priest could not preach that those persons lacking in the spirit of charity risked their salvation. There was no salvation! The gods did not offer any escape from mortality.

A second historical point that is worth mentioning has to do with concerns that many people had in the atomic age. With the advent of the atomic bomb, many wondered if they were witnessing the end of the world. One Christian writer who had some sensible things to say about this was C. S. Lewis. In 1948 he wrote a brief essay entitled, “On Living in an Atomic Age”.

The 1986 volume Present Concerns contains the article. The piece opens with these words:

In other words, do not let us begin by exaggerating the novelty of our situation. Believe me, dear sir or madam, you and all whom you love were already sentenced to death before the atomic bomb was invented: and quite a high percentage of us were going to die in unpleasant ways. We had, indeed, one very great advantage over our ancestors – anaesthetics; but we have that still. It is perfectly ridiculous to go about whimpering and drawing long faces because the scientists have added one more chance of painful and premature death to a world which already bristled with such chances and in which death itself was not a chance at all, but a certainty.

This is the first point to be made: and the first action to be taken is to pull ourselves together. If we are all going to be destroyed by an atomic bomb, let that bomb when it comes find us doing sensible and human things – praying, working, teaching, reading, listening to music, bathing the children, playing tennis, chatting to our friends over a pint and a game of darts – not huddled together like frightened sheep and thinking about bombs. They may break our bodies (a microbe can do that) but they need not dominate our minds.

He compares the Christian view of things with that of the naturalist, and then concludes the essay this way:

It is part of our spiritual law never to put survival first: not even the survival of our species. We must resolutely train ourselves to feel that the survival of Man on this Earth, much more of our own nation or culture or class, is not worth having unless it can be had by honourable and merciful means.

The sacrifice is not so great as it seems. Nothing is more likely to destroy a species or a nation than a determination to survive at all costs. Those who care for something else more than civilization are the only people by whom civilization is at all likely to be preserved. Those who want Heaven most have served Earth best. Those who love Man less than God do most for Man.

That is a good perspective – one that all believers at least should hold on to. And it ties in with my third and final point. Often as the days grow ever darker, I find myself praying one thing more and more: “Come quickly Lord Jesus!” It occurred to me yesterday that perhaps – just perhaps – what we find happening now with this virus might be part of an answer to this prayer.

I tend to think not – but it is possible. Some experts are telling us that the virus has already peaked in some places, such as Wuhan, China where it originated. And if nations keep taking sensible steps to restrict its spread, it may indeed be a distant memory in a year or two from now.

Time will tell of course. Some Christians are claiming this is the judgment of God. Once again, that is possible. But every time some tragedy or disaster befalls us, there are those who are certain that this could be the wrath of God coming upon a sinful people. As I keep saying, this might be the case, but we do not have the same sure word as the Old Testament prophets provided in such circumstances.

But we do know that God is in control, that he does know the very hairs of our heads, and he does have his appointed times and seasons. So as always, we must keep our focus on him. We must keep our trust in him. Yes, we take health risks seriously, but at the end of the day, we must make God our real hope and security.

As such, believers can hold on to some of the comforting generic promises found in Scripture, such as the following:

Psalm 46:1-3 God is our refuge and strength, an ever-present help in trouble. Therefore we will not fear, though the earth give way and the mountains fall into the heart of the sea, though its waters roar and foam and the mountains quake with their surging.

Psalm 62:1-2 My soul finds rest in God alone; my salvation comes from him. He alone is my rock and my salvation; he is my fortress, I will never be shaken.

Isaiah 41:10 So do not fear, for I am with you; do not be dismayed, for I am your God. I will strengthen you and help you; I will uphold you with my righteous right hand.

Luke 12:25-26 Who of you by worrying can add a single hour to your life? Since you cannot do this very little thing, why do you worry about the rest?

John 14:27 Peace I leave with you; my peace I give you. I do not give to you as the world gives. Do not let your hearts be troubled and do not be afraid.

2 Thessalonians 3:16 Now may the Lord of peace himself give you peace at all times and in every way.

In the past hour American President Donald Trump tweeted this: “It is my great honor to declare Sunday, March 15th as a National Day of Prayer. We are a Country that, throughout our history, has looked to God for protection and strength in times like these. No matter where you may be, I encourage you to turn towards prayer in an act of faith. Together, we will easily PREVAIL!”