Even more Islamic terror attacks that are not Islamic or terror-related!

This IS the official narrative and it will NOT be deviated from. No matter how many Muslims go on killing sprees in Australia, we will be given only one line: police have no idea what the motivations are, he acted alone, and he was mentally unwell. 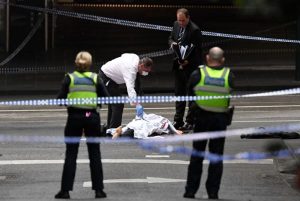 This WILL be the official line now and for evermore. Whatever we do, we must not mention the I word, the M word, or the T word. If you are in the dark on those three, let me spell them out; Islam. Muslim. Terrorism. These are now three sacred words that can never be uttered by the powers that be. These terms will never come from the lips of a government official or media lackey.

It is pretty clear that the decision has been made: it is far, far better to see various innocent men, women and children murdered on our streets than to do anything that might offend Muslims. The ‘Islam is a religion of peace’ mantra must now be proclaimed and maintained at all costs. So what if dozens of innocent Australians are murdered? Islam must be protected no matter what.

That is now official doctrine in Australia and the West. There will be no other narrative allowed. Facts and evidence will not be allowed to get in the way. Now the only thing that matters is to protect Islam and its reputation. Murdered innocents and blood on the streets are just part of the price we will have to pay for this.

Am I overstating things here? If these were the only two cases, then I could be. But I have documented so many other cases just like this on this website – both from here and overseas. It is as predictable as it is appalling. The default position of most Western governments and media outlets is to do whatever it takes to exonerate Islam.

Most folks in the West have had an absolute gutful of all this. Blind Freddy can see the common thread of all these killings. But our leaders refuse to run with the obvious. They have totally capitulated to Islam, and have completely bought the narrative of Islamophobia and Muslim victimhood status.

Let me get back to these two recent cases of Islamic terrorism in Australia. The recent case in Melbourne was indeed a shocker. One recent article gives us the description of what transpired:

Three people are dead and a fourth is in hospital after a series of random, “senseless” stabbings across Melbourne’s inner-east on Wednesday night. Two women arriving at their Hawthorn home on one of Melbourne’s most affluent streets were stabbed, one fatally, before a man was stabbed to death near a Kew tram stop. The second woman was in a stable condition in hospital on Thursday afternoon.

It then goes on to say that we now have the guy’s name, along with the usual PC baloney from the authorities:

Mohammed Ibrahim, 34, from Roxburgh Park, slashed a Protective Services Officer to the face at Jolimont train station earlier in the night and was shot dead by police shortly after midnight. He was armed with two kitchen knives and a switchblade. . . . Assistant Commissioner Glenn Weir said the attacks were random and the motive unclear. www.theage.com.au/national/victoria/man-shot-dead-by-police-after-series-of-stabbing-attacks-in-melbourne-s-eastern-suburbs-20200312-p54987.html

There we go again: just some random attacks and no clear motivation.  And consider the stabbings in Brisbane from last month:

The man shot dead by police after stabbing a young tourist in Brisbane’s CBD this morning was on a counter terror watch list, police have revealed. The 25-year-old was born in Afghanistan but had been living in Australia and was known to police, but detectives say at this stage they are not treating his actions as a terror attack.

The man, whose name has not yet been released, was shot by police after he stabbed an overseas tourist with a knife on Mary Street around 10am today. The 26-year-old male victim was walking down Mary Street with a woman, at 10am when they were approached by the man, who they say was “behaving strangely”. www.9news.com.au/national/brisbane-shooting-man-dead-in-cbd-queensland-news/64151764-c9df-498e-a59c-17d444258bdd

OK, so here we have a guy from Afghanistan, presumably a Muslim (there are not too many Baptists or Hindus there) who was on a counter terror watch list, yet “they are not treating his actions as a terror attack.” Um, why not? What exactly does someone have to do before his killings are treated as a terrorist attack?

I think I know: if a white guy with a Bible in his pocket stabbed some folks to death, we all know exactly what the motivation is: another White Supremacist Christian who has engaged in hate crimes and terrorism. There will be NO talk about him being a lone wolf, about having mental health issues, about random attacks, and about not tarring all whites and Christians with the same brush. None.

That is the culture we now live in. You simply cannot tell the truth about Islam and terrorism anymore. That is now verboten. We all must sing from the same official government song sheet. And that tune is quite clear: Islam is always good, there is no such thing as Islamic terrorism, and we must never suggest otherwise.