We need to learn some important lessons during this pandemic:

When Jesus told us the following in John 14:27, he actually meant it: “Peace I leave with you; my peace I give you. I do not give to you as the world gives. Do not let your hearts be troubled and do not be afraid.” Fear and panic and hysteria are not to be the way believers respond to crises and chaos.

Much of the media and many in government seem to be responding that way, but the believer is one who puts his faith and trust fully in God. Yes, he also lives wisely and prudently, and does not take foolish and unnecessary risks in times of a health crisis, but he is fully committed to God and his purposes. He need not fear because he knows who is in control. 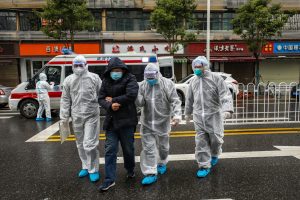 This is now my fourth article on the Coronavirus and likely not my last. I have already looked at how statism can increase exponentially in times of crisis; how we are to understand various biblical passages that speak of things like plagues and pestilence; and how two examples from church history show how Christians have responded to past crises. That last piece is found here: https://billmuehlenberg.com/2020/03/14/coronavirus-christianity-history-and-faith/

In it I discussed how the early church dealt with plagues and diseases, in contrast to how paganism responded. And I quoted C. S. Lewis as to how we should deal with frightening and trying times. Here I want to briefly look at two other Christian responses to plagues and panic: that of Martin Luther and Charles Spurgeon.

Both have been quoted quite often of late, so let me also simply share some of their thoughts as discussed by others. Grayson Gilbert explains how Luther responded when the Bubonic Plague came to town:

In August of 1527 the plague struck Wittenberg and numerous people fled in fear of their lives. Martin Luther and his wife Katharina, who was pregnant at the time, remained in their beloved city in order to treat the infected. Despite the calls for him to flee Wittenberg with his family, Luther’s mind was set on helping the infected. He inevitably came to the conclusion that it was not inherently wrong for one to so value their life that they did not remain, but only so long as the sick had someone of greater faith than they to care for them. He balanced this position with the conviction that this one of greater faith ought not condemn the one of weaker faith who fled.

“Yes, no one should dare leave his neighbor unless there are others who will take care of the sick in their stead and nurse them. In such cases we must respect the word of Christ, ‘I was sick and you did not visit me …’ [Matt. 25:41–46]. According to this passage we are bound to each other in such a way that no one may forsake the other in his distress but is obliged to assist and help him as he himself would like to be helped.”

In other words, Martin Luther maintained that there was an obligation to help those who contracted the plague, but so long as they were helped, it was a matter of conscience if one remained to aide in this great task. He argued that it would be better for hospitals with trained staff to care for the sick, wherein each Christian should offer generous contributions—yet if one were not to be found, “…we must give hospital care and be nurses for one another in any extremity or risk the loss of salvation and the grace of God. Thus it is written in God’s word and command, ‘Love your neighbor as yourself,’ and in Matthew 7, ‘So whatever you wish that men would do to you, do so to them.’” So strong were his convictions on the matter that he said anyone who was overcome by horror and repugnance in the presence of the infected ought to recognize the intrinsic, spiritual warfare taking place—that Satan himself was filling their minds to drive them to anxiety, fear, and worst of all, “…to forget and lose Christ, our light and life…” https://www.patheos.com/blogs/chorusinthechaos/martin-luther-and-the-black-plague/

And Charles Spurgeon also had to deal with all this when a cholera outbreak occurred quite close by. Geoff Chang discusses his involvement in this, and offers a number of quotes from Spurgeon:

During that epidemic of cholera, though I had many engagements in the country, I gave them up that I might remain in London to visit the sick and the dying. I felt that it was my duty to be on the spot in such a time of disease and death and sorrow.

If there ever be a time when the mind is sensitive, it is when death is abroad. I recollect, when first I came to London, how anxiously people listened to the gospel, for the cholera was raging terribly. There was little scoffing then.

In the year 1854, when I had scarcely been in London twelve months, the neighborhood in which I labored was visited by Asiatic cholera, and my congregation suffered from its inroads. Family after family summoned me to the bedside of the smitten, and almost every day I was called to visit the grave.

All day, and sometimes all night long, I went about from house to house, and saw men and women dying, and, oh, how glad they were to see my face! When many were afraid to enter their houses lest they should catch the deadly disease, we who had no fear about such things found ourselves most gladly listened to when we spoke of Christ and of things Divine.

And now, again, is the minister’s time; and now is the time for all of you who love souls. You may see men more alarmed than they are already; and if they should be, mind that you avail yourselves of the opportunity of doing them good. You have the Balm of Gilead; when their wounds smart, pour it in. You know of Him who died to save; tell them of Him. Lift high the cross before their eyes. Tell them that God became man that man might be lifted to God. Tell them of Calvary, and its groans, and cries, and sweat of blood. Tell them of Jesus hanging on the cross to save sinners. https://www.spurgeon.org/resource-library/blog-entries/spurgeon-and-the-cholera-outbreak-of-1854

Now those were two strong Christians with their priorities right. Indeed, using such situations to share the gospel is vital. If we all had the same strong reaction to the sin virus that has been at pandemic levels ever since our first parents sinned as we do to Coronavirus, we would be in a far better place.

God is at the very least trying to get our attention here. I for one do not think we are living in the very last moments of human history, with the judgments of the book of Revelation being played out as we speak. From my assessment, they do not yet seem to be upon us as yet – not by a long shot.

However, several things can be gleaned from this time of crisis. One, the hardships and crises we now face should serve as at least a very faint reminder of what will indeed come one day. This can serve as a dry run for what lies ahead when the return of Christ does occur.

When his bowls of judgment do finally burst forth, we will all most certainly know it, and all this will seem to have been but a mere picnic. But hopefully it will cause many people to now think carefully of their eternal fate and their relationship to their Creator and judge.

And secondly, all the long lines and empty shelves in so many stores should serve as a good reminder of what life will be like if we buy the lies of the socialists, vote them into power, and run with their agendas. If you think things are bad now, just wait until the socialists get their way – it will make this seem quite tame in comparison.

So we must learn a few lessons here. No, I do not believe this is the end of the world. But it might be a good example of what things will look like when it is. Are we ready? When the medical profession warns us of a pandemic, and what steps must be taken, most of us respond diligently and immediately. Do we show the same response to the many warnings found in Scripture?

If God is allowing something like the Coronavirus to get our attention, we all had better take notice. The worry I have is that soon enough this will be over, and for most people it will be business as usual. But we are living on borrowed time here. How many more such warnings will God graciously give us before it is too late?

10 Replies to “Dealing with Disease, Disaster and Discipleship”