The Coronavirus is changing the way the state interacts with the people – both good and bad:

As numerous governments around the world are now taking various steps to help curb the spread of Coronavirus, there have been all sorts of concerns raised, depending on your perspective on things. Some who may think the earth is doomed may be demanding far more state action and involvement. They claim governments are not doing enough. 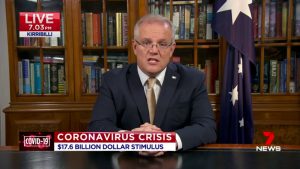 Others who are more sanguine about the virus and how deadly it might be are concerned that governments are involved in overkill here. They claim they are overreacting, restricting too much individual liberty, and unduly increasing the size and scope of the state. So who is right?

I have already penned a piece on the general historical truth that as crises emerge, there is a very real tendency for states to expand in power while individual freedoms are restricted or eliminated. In it I said: “The state is ever willing to seize control of things, but is very loathe to give up control. Thus a public health crisis is just the sort of thing that power-hungry politicians will latch onto in order to grab more control and power. And that means much less liberty and freedom for ordinary citizens.”

I also said this: “Of course in times of genuine crisis and emergency there is a place for the state to step in and act in a responsible and appropriate manner. But the trick is to discern what is a real and major crisis, what is a mild crisis, and what is just a manmade or fake crisis.” billmuehlenberg.com/2020/03/12/crises-liberty-and-the-state/

Let me look at three broad areas in which the intersection of the virus and the state are creating new situations: one, cases of expanding statism; two, a few cases where the government is loosening restrictions; and three, cases where folks are seeking government bailouts.

One: growing statism. To see what a very real threat this is, simply consider a number of things that various states have done since I wrote that earlier article. I have been trying to follow how certain overseas jurisdictions have been responding to this, and how there appears to be some pretty heavy-handed government clampdowns.

In Denmark for example a new coronavirus law “gives health authorities powers to force testing, treatment and quarantine with the backing of the police. The far-reaching new law will remain in force until March 2021, when it will expire under a sunset clause.” www.thelocal.dk/20200313/denmark-passes-far-reaching-emergency-coronavirus-law

Wow, an entire year of emergency powers! Consider what has just occurred in the UK: “Local elections and the London mayoral election have been postponed for a year to deal with the coronavirus outbreak. The government made the decision to push back the 7 May elections after the Electoral Commission said the health crisis would have an impact on campaigning and voting.” www.theguardian.com/world/2020/mar/13/local-london-mayoral-elections-postponed-year-coronavirus-uk

Now isn’t that very convenient for London Mayor Sadiq Khan? And another mayor, Bill de Blasio of New York City, has just called for the “nationalization of crucial factories and industries” to help fight the Coronavirus! www.teaparty.org/socialism-de-blasio-calls-for-nationalization-of-factories-industries-to-combat-coronavirus-432049/

What has been happening in Italy has been quite alarming. Consider this:

Doctors in Italy are rationing resources in their intensive care units amid the coronavirus outbreak.  Medical officials are urging health care workers not to treat elderly patients or patients with certain comorbidities, regardless of whether they have the virus. The Italian College of Anesthesia, Analgesia, Resuscitation and Intensive Care published utilitarian guidelines stating that doctors and nurses should deny treatment for people who have too low a number of expected “life-years” left. www.texasrighttolife.com/italy-icus-urged-to-stop-treating-elderly/

California has also been making some harsh decisions: “Gov. Gavin Newsom on Sunday called for 5.3 million senior citizens and others at risk to stay home in an effort to slow the spread of coronavirus. The call for home isolation also extended to people with chronic conditions that make them vulnerable to the virus.” www.latimes.com/california/story/2020-03-15/california-calls-on-5-3-million-senior-citizens-to-stay-home-because-of-coronavirus-what-you-need-to-know

And other American states are also getting in on the act with what some would consider to be rather draconian actions: “Ohio Gov. Mike DeWine and Illinois Gov. J.B. Pritzker announced Sunday afternoon that the state governments will be issuing orders closing all bars and restaurants. Ohio’s order becomes effective Sunday evening; Illinois’ begins Monday evening. The orders will remain in effect indefinitely.” disrn.com/news/ohio-illinois-order-all-restaurants-and-bars-to-close-statewide

Hmm, statism in action. Again, that some government action is needed is not in dispute. The question is, are such steps a case of government overreach and overkill, or are these simply prudent and needed measures? Are these indeed helpful measures that we should applaud, or should we be worried about Big Brother in action?

Two: loosening of restrictions. There can be rare situations where crises of various sorts, including public health crises, can actually result in some moves in the other direction, for example with certain restrictive laws being repealed or suspended. I just read about one such case in the US:

All along America’s highways, trucks hauling vital relief supplies are cutting through red tape, thanks to President Donald Trump. The Federal Motor Carrier Safety Administration on Friday announced that a 1938 law regulating the hours of service for truck drivers was being waived on a national basis to battle the coronavirus.

The agency said this was first time the rule had ever been waived throughout the country. “I will never hesitate to take any necessary steps to protect the lives, health, and safety of the American people. I will always put the well-being of America first,” Trump said, according to a White House media pool report.

The rule currently forbids truck drivers from driving more than 11 hours during a 14-hour work period. After that, drivers are required by law to have 10 hours of down time. The waiver, issued by Trump and Transportation Secretary Elaine Chao, exempts truckers hauling medicine and other supplies necessary to battle the outbreak of the virus, FMCSA Acting Administrator Jim Mullen said. www.westernjournal.com/trump-suspends-1938-road-law-gives-truckers-green-light-move-emergency-supplies/

Another example (good or bad, depending on your views on fiscal policy) involves American interest rates:

In a bold, emergency action to support the economy during the coronavirus pandemic, the Federal Reserve on Sunday announced it would cut its target interest rate near zero. The swifter-than-expected rate cut is designed to prevent the kind of credit crunch and financial market disruptions that occurred the last time the Fed had to cut rates all the way to the bottom, during the global financial crisis just over a decade ago. edition.cnn.com/2020/03/15/economy/federal-reserve/index.html

Three: state bailouts. Then we have the matter of how much governments should step in and bail out or subsidise various struggling businesses and activities. Plenty of major sporting events for example are being hit hard with this, and games are being cancelled, or allowed to go ahead in empty stadiums. So should the tax-payer help these groups out? Consider one such plea for funds:

NRL pleas for government assistance to save rugby league and its clubs amid the coronavirus pandemic have fallen on deaf ears. In addition to pushing for special consideration to test players for coronavirus, the NRL said it faces a “catastrophic” demise if it’s forced to suspend the competition. On Sunday the NRL confirmed it would forge ahead with the competition in round two in the interest of keeping the game alive financially despite the growing pandemic which has forced the shut down of other major sports….

On Monday the hopes of government aid were shut down by prime minister Scott Morrison, who scrapped plans to attend a Cronulla Sharks game on Saturday. “The NRL is not high on the list at the moment,” Morrison told 2GB. “(Compared to) addressing the health issues, hospitals, making sure we’ve got health workforces in place, aged care facilities, small businesses, making sure they’ve got cash-flow support, and in particular casuals.” 7news.com.au/sport/rugby-league/rugby-leagues-plea-for-cash-falls-on-deaf-ears-as-scott-morrison-responds-c-747146

Australian politician Mark Latham has just put out a communication on all this: “HELP THE VULNERABLE, NOT THE PRIVILEGED”. He writes:

It would be bizarre for governments to subsidise or bail-out elite sporting codes as a response to the CoronaVirus impact, given that the players are millionaires and some clubs are owned by major corporations. Priority must be given to funding frontline health services, looking after the elderly in particular.

Corporate sponsors run sporting codes these days, let them sort it out. Let them pay the money, not the taxpayer. The NRL, for instance, is asking for a $200-500 million bail-out from the Federal Government and compliant sports reporters think this is a fair dinkum use of public money in the middle for a public health emergency. The elderly are dying in our hospitals, it’s time to look after the health budget and our health workers and patients, not woke sporting codes and their elite, wealthy administrators.

So these are just three areas in which Coronavirus is making some very real changes to the way we live – certainly in terms of government action – or inaction. The state of necessity will be involved here. How, where and why it gets involved is what we need to keep an eye on. We must remain vigilant here.

11 Replies to “The Intersection of the State and Coronavirus”