It is too easy to let mere utilitarian concerns determine how people get medical treatment in a time of crisis:

In a recent article on how a government can use a crisis to take away individual freedoms and take ever more power onto itself, I looked at COVID-19 and some of the radical and draconian measures being taken by some federal and state governments. I mentioned how Italy for example is cutting health care for the elderly. Those who are over the age of 60 are being denied various types of medical help. 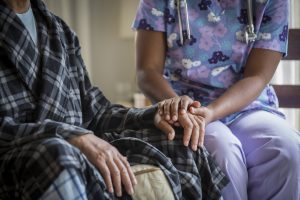 So what are we to make of this. Is it right? Is it ethical? Is it fair? Medical ethicists have long wrestled with such matters. And in times of war and in extreme crisis we especially need to allocate scarce medical resources and make difficult decisions as to who gets what.

For example, triage may sometimes be called for. This is, as one online site says, “(in medical use) the assignment of degrees of urgency to wounds or illnesses to decide the order of treatment of a large number of patients or casualties.” People are divided into various groups and will receive treatment accordingly.

But this is always something we must undertake very carefully. It is far too easy to end up with mere utilitarian considerations. We can too easily treat entire classes of people (the elderly, the disabled, and others) as second-class citizens. This is always an area that we must take great care in.

Of course entire libraries exist devoted to books and articles on this. It can be a very complex issue indeed, and where one stands on these matters largely depends on what one’s starting point is. A hardcore utilitarian like Peter Singer will have a lot less concern about allowing certain groups of people to be bumped off than, say, one who adheres to the Judeo-Christian worldview.

Let me here appeal to several philosophers, ethicists, and public policy experts from that camp. I could pull any number of books from my shelves to assist me here, but let me instead refer to several recent articles. One piece from America begins this way:

As state health officials plan for health care rationing during the coronavirus pandemic, lawyers, ethicists and theologians are warning that denying care on the basis of age or disability violates federal law. “There’s always the temptation when things get rough, and when you’re looking at rationing situations and looking at triage, to fall into the error of devaluing human lives,” Dr. Robert George, a professor of jurisprudence and director of the James Madison Program at Princeton University, told CNA on Monday.

While health care rationing may be a “reality” during a crisis, George said, it can never be done on the basis of categories such as age or disability. “What we think it’s critical to avoid is falling into the trap of making judgments about whose life is and whose life isn’t a life worth living, or falling into the trap of thinking that some peoples’ lives are inherently superior to others,” George said.

They did so citing reports that health care entities are already planning for “crisis” scenarios in the new coronavirus (COVID-19) pandemic, which has already resulted in more than 46,000 confirmed cases in the U.S., according to Johns Hopkins University. www.catholicnewsagency.com/news/lives-worth-living-why-healthcare-rationing-must-be-ethical-85420

Since Charles Camosy is mentioned in the article, let me run with him a bit further. He has authored a number of books on these issues, including his most recent one: Resisting Throwaway Culture: How a Consistent Life Ethic Can Unite a Fractured People (New City Press, 2019).

He recently wrote a newspaper opinion piece titled “Coronavirus crisis: The wrong way to decide which patients get hospital care” that is worth alerting you to. He speaks about how “individual health providers will have to wrestle with that dreadful thing: rationing” and then says this:

For a professional ethicist like me, this is sobering but hardly surprising. We are finite creatures in a world of finite resources. The idea that we are always and everywhere masters of our own fate — and can collectively solve every problem without painful trade-offs — is an illusion. Our coronavirus moment is a dramatic reminder of this.

But that doesn’t mean we shouldn’t try to do our best — and thank God for truly heroic health-care workers on the front lines. Especially given that most know their situation is about to get much worse.

The Italians have already faced the bedeviling moral dilemmas of rationing, and in a guidance to providers, the Italian government has recommended that resources be rationed by age.

According to a translation of the government guidance, age-based rationing is “a way to provide extremely scarce resources to those who have the highest likelihood of survival and could enjoy the largest number of life-years saved.”

Bioethicists like me disagree over which values should guide rationing, but we generally agree about focusing on those who can benefit from the treatment. If the age of a patient makes it unlikely she would benefit, the hard truth is that limited resources will likely go to someone else.

Happily, New York state put together a protocol back in 2008 titled “Allocation of Ventilators in a Public Health Disaster” (largely reaffirmed in 2015) designed for a moment like ours. Wisely, our state insists that age and health problems or disabilities unrelated to what is causing the epidemic shouldn’t serve as the basis for rationing. Prognosis for recovery is what matters.

A New York hospital could choose to give its last ventilator to the 72-year-old marathon runner rather than to the 57-year-old pack-a-day smoker. Again, based only on prognosis for recovery. The objectivity of the standard removes much of the physician’s subjective ideology from the picture. nypost.com/2020/03/19/coronavirus-crisis-the-wrong-way-to-decide-which-patients-get-hospital-care/

Finally, let me share a few thoughts from a Jewish theologian:

Notice how the all-too-familiar rhetoric of dehumanization works: “The elderly” are bunched together as a faceless mass, all of them considered culprits and thus effectively deserving of the suffering the pandemic will inflict upon them. Lost entirely is the fact that the elderly are individual human beings, each with a distinctive face and voice, each with hopes and dreams, memories and regrets, friendships and marriages, loves lost and loves sustained.

But they deserve to die—and as for us, we can just go about our business. It is bad enough if we remain indifferent to the plight of our elders; it is far worse to dress up our failings as moral indignation.

As a rabbi and theologian watching this ethical train wreck, I find myself thinking about the biblical mandate to “honor your father and mother.” The Hebrew word usually translated as “honor,” kabed, comes from a root meaning “weight.” At the deepest level, then, the biblical command is thus to treat the elderly as weighty. Conversely, the Bible prohibits “cursing” one’s parents. The Hebrew word usually translated as “curse,” tekalel, derives from a root meaning “light.” At bottom, then, the biblical proscription is on treating the elderly lightly, as if they are inconsequential.

Why do I say “the elderly”? In its biblical context, the obligation to honor parents is a command given to grown children (as are the Ten Commandments more broadly—you don’t tell children not to commit adultery nor to covet their neighbors’ fields). When you are an adult, the Bible instructs, you must not abandon the elderly. Giving voice to a pervasive human fear, the Psalmist prays, “Do not cast me off in old age; when my strength fails, do not forsake me!”

What does it say about our society that people think of the elderly so dismissively—and moreover, that they feel no shame about expressing such thoughts publicly? I find myself wondering whether this colossal moral failure is exacerbated by the most troubled parts of our cultural and economic life. When people are measured and valued by their economic productivity, it is easy to treat people whose most economically productive days have passed as, well, worthless.

From a religious perspective, if there is one thing we ought to teach our children, it is that our worth as human beings does not depend on or derive from what we do or accomplish or produce; we are, each of us, infinitely valuable just because we are created in the image of God. We mattered before we were old enough to be economically productive, and we will go on mattering even after we cease to be economically productive. www.theatlantic.com/ideas/archive/2020/03/respect-old/607864/

As stated, these are often difficult and complex matters. But we must especially resist the siren call of mere pragmatic and utilitarian concerns in a time of great crisis. If we treat entire groups of people in such a cavalier fashion, we will be causing as much harm as the virus itself.