Mass crises have struck us before, and we need to learn from history how Christians have responded:

In dark times, the light of Christ is meant to shine the most. In this present corona crisis it is hoped that individual Christians as well as entire churches and denominations will rise to the challenge, and demonstrate that the gospel is good news for both soul and body. 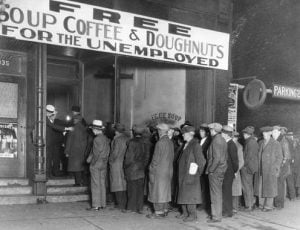 That has normally been the case in the past 2000 years of Christianity. Therefore, in these very trying times we need to learn from history, and see what believers in the past have done in times of major crisis and catastrophe. With this in mind, I have pulled a few books from my church history section to assist in this effort.

Since so many of our efforts at dealing with COVID-19 are having very severe economic consequences, it is worth looking at similar such economic crises in history. A question that emerges now is this: in our attempt to save as many lives from disease as we can, how many lives might be lost due to national economic turmoil and meltdown?

As the state steps in to deal with one major crisis, is it bringing about another major crisis? Thus it is also worth looking at past economic crises, whether or not pandemics have gone with them. How have Christians responded during such times?

Here I will concentrate mainly on the Australian scene, but the West as a whole will also be covered somewhat. One volume I just perused is The Disruption of Evangelicalism by Australian academic Geoffrey Treloar. It is the fourth in an excellent five-volume set, A History of Evangelicalism. I briefly discuss this set here: billmuehlenberg.com/2018/03/15/helpful-church-history-sets/

I turned to what he had to say about Western evangelicals and the Great Depression of the 1930s. Let me offer a few quotes from the volume:

Although a social calamity of the first order, evangelicals unsurprisingly showed little interest in it as an economic phenomenon. . . . But, whatever their outlook on the role of the state, evangelicals themselves were more or less at one in contributing directly to the relief of the suffering. Individuals and churches all around the evangelical world provided food, clothing and shelter to the needy, while the resources of organizations such as the Salvation and Church Armies were stretched to the limit as they provided material aid at an unprecedented level.

He goes on to single out Sydney Anglican evangelical R. B. S. Hammond (1870-1946), whose “many schemes to help the unemployed culminated in the purchase out of his own pocket of the land on which Pioneer Village – subsequently the outer Sydney suburb of Hammondville – was established to provide housing on a rent-purchase basis for destitute families.”

The second important volume that I pulled from my shelves is the recently released Attending to the National Soul by Stuart Piggin and Robert Linder. It is the follow-up volume to their earlier work, The Fountain of Public Prosperity. See my review of that book here: billmuehlenberg.com/2019/01/29/a-review-of-the-fountain-of-public-prosperity-by-stuart-piggin-and-robert-linder/

In these two works the authors look only at Australian evangelical history. They also cover the great Depression and the work of Hammond. Before getting to that, let me note what they have to say about an earlier crisis which sounds so very much like what we are undergoing today:

Beginning in January, 1919, the Spanish Influenza pandemic reached Australia, killing 12,000 Australians and millions worldwide. Churches, schools and meetings were closed, and the Anzac Day marches planned for April 1919 were cancelled. Strict quarantine regulations delayed the landing of troopships and each State closed its border in an attempt to isolate the little understood disease.

The authors discuss how churches reached out during this period, and then they look at the Great Depression:

The economic crisis that hit the New York Stock Exchange in October 1929 quickly spread around the globe. The Australian economy was more afflicted than most, with levels of debt and unemployment only worse in Germany in the Western world. Governments were woefully slow to offer assistance to the victims: it was not until April 1930 that South Australia introduced the first government-funded food dole for the unemployed.

While churches were often unprepared for all this, and may have been more interested in saving souls, “they nonetheless probably fed and housed more bodies than any other community organisations.” Among evangelical leaders “were those who combined compassion and pragmatism which enabled them to give practical assistance to the needy and occasionally to experiment with prophetic departures from socio-economic norms.”

The authors note that among the evangelical churches, “the Methodists and the Salvation Army were the best prepared to assist the needy.” They too discuss the work of Rev. Hammond. They say this, in part, about the man:

Hammond was converted to Christ in the famous Grubb mission in 1891. He began his ministerial career in Melbourne in 1894 and moved to Sydney in 1899. Between 1904 and 1911, as an inner-city missioner, Hammond transformed the Mission Zone Fund of the Church of England Home Mission Society into the spearhead of the Church’s ministry to the inner city. He evangelised in the streets and in the factories and urged those who would listen to give up alcohol. . . . It is said that 4,400 men came to Christ through Hammond.

When the Great Depression broke out Hammond was fully involved in helping destitute families. At a settlement near Liverpool he offered low cost wooden homes on an acre of land for families with three or more children. By 1934 there

were more than fifty homes, a shopping centre and post office, a school and a community hall. By 1939, Hammondville was a community of 110 cottages sitting on 225 acres of land, and Hammondville itself was a new Sydney suburb. It proved to be one of the few successful land settlement schemes in Australian history and an enduring testimony to Hammond’s vision and foresight.

This is just a very small part of what Christians and churches were doing during the Great Depression and other periods of crisis. These impressive works of Christian charity serve as reminders and models of what Christians today might be doing.

Yes, increasingly the state has taken over most of these roles, but there is certainly still a place for Christians acting alone or in churches or in para-church groups to still make a real difference during times of severe crisis. Now more than ever the light of Christ needs to shine.

Pray for our leaders

Whether a Scott Morrison, a Donald Trump, a Boris Johnson, or whoever, our political leaders need real wisdom and discernment these days as to how best guide their nations. Most of them have two swords hanging over their heads: the COVID-19 catastrophe, and the likely economic catastrophe, with the cure possibly being worse than the virus.

Plenty of leftists and Trump haters for example claim that he is only concerned about profits and not people. Give me a break. Yes the virus is taking many lives, but the destruction of a nation by prolonged periods of mass unemployment also can take many lives. Recall that 40,000 Americans committed suicide during the Great Depression.

Thus our leaders need to balance how we deal with this virus with how we keep a nation afloat in tough times. They need our prayers right now much more than they need our armchair criticisms. Sure, they need to hear from others and listen to sound advice and counsel as well, but they certainly need divine guidance during these difficult days.

Governments today have a very real role to play in major catastrophes such as this. But so too do Christians and church bodies. And learning from how Christian compassion played itself out in the past is one way to help guide us in the present, and lead us into the future.

9 Replies to “Crisis, Christianity, and Compassion”