Christophobia is alive and well in times of crisis:

It never takes much for the Christophobes to come out of the woodwork. Any excuse will do actually. And it is not just today’s progressives who carefully follow the maxim, ‘Never let a good crisis go to waste.’ Misotheists and Christ-haters have been doing this for millennia now. 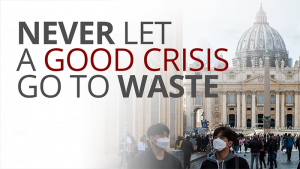 History is replete with examples of this of course. Consider one very famous case of this from the early days of the faith. When Rome was destroyed by fire in 64 AD, the pagan Roman Emperor Nero blamed the Christians. Let me look at this episode in a bit more detail.

In his classic 1958 book on early Christianity, The Spreading Flame, F. F. Bruce gives us some description about the blaze and the blame that was put on Christians:

Rumour was not content to ascribe the fire to accident, and some curious reports began to circulate. Some men who ought to have been checking the conflagration were seen (it is said) actively helping it on, and when challenged they said they had their orders. The Emperor himself was suspected of starting the conflagration. There is no proof of this; even if he “fiddled while Rome burned,” that does not make him an incendiary. In fact, he threw himself actively into the organization of relief for those who had suffered in consequence of the fire. But when he found that the finger of rumour pointed to him as the instigator of the fire, he did not like it. The people would not cherish kindly feelings towards one who was believed to have destroyed their homes and their living, too. So Nero looked about for scapegoats, and had no difficulty in finding some. The sequel may be told in the words of Tacitus, who obviously had no sympathy with the scapegoats, but knew that there was no evidence to connect them with the fire.

“Therefore, to scotch the rumour, Nero substituted as culprits, and punished with the utmost refinements of cruelty, a class of men loathed for their vices, whom the crowd styled Christians. Christus, from whom they got their name, had been executed by sentence of the procurator Pontius Pilatus when Tiberius was emperor; and the pernicious superstition was checked for a short time, only to break out afresh, not only in Judaea, the home of the plague, but in Rome itself, where all horrible and shameful things in the world collect and find a home. First, then, those who confessed themselves Christians were arrested; next, on their disclosures, a vast multitude were convicted, not so much on the charge of arson as for hatred of the human race. And their death was made a matter of sport: they were covered in wild beasts’ skins and torn to pieces by dogs; or were fastened to crosses and set on fire in order to serve as torches by night when daylight failed. Nero had offered his gardens for the spectacle and gave an exhibition in his circus…”

I say all this because things have not changed in the past two millennia. There are still plenty of Christian-haters out there, always willing to blame them for anything and everything. Did you burn your toast this morning? It is the fault of Christians of course. Did you get a flat tire while driving to work? Yep, its those darn Christians.

And the secular left media is up to its ears in all this. Now we even have the pagan, misotheist New York Times doing the very same thing today. They are running with the same blame game that Nero did: we now know that coronavirus is all the fault of Christians! Yes, you read that right.

An opinion piece in the New York Times dated March 27, 2020 by Katherine Stewart is titled, “The Road to Coronavirus Hell Was Paved by Evangelicals.” The article begins with these words: “Trump’s response to the pandemic has been haunted by the science denialism of his ultraconservative religious allies.” www.nytimes.com/2020/03/27/opinion/coronavirus-trump-evangelicals.html

Wow, there you have it folks. What evil people those evangelicals must be: imagine that, causing this major pandemic! Burn them all at the stake. Or at least use them as human torches like Nero did when the power grids shut down. Let’s put them to good use.

Consider just one paragraph from her scurrilous rant: “Religious nationalism has brought to American politics the conviction that our political differences are a battle between absolute evil and absolute good. When you’re engaged in a struggle between the ‘party of life’ and ‘party of death,’ as some religious nationalists now frame our political divisions, you don’t need to worry about crafting careful policy based on expert opinion or analysis.”

Um yeah, actually there is a war on between good and evil, between the prolife camp and the pro-death camp. Yes it really is that serious. But of course leftist lamestream media rags like the NYT have been pushing irrational and hateful Christian bashing for decades now. They utterly loathe Donald Trump, and they utterly loathe any evangelical Christians who dare to support him and pray for him.

So no surprises here. The only thing that is a bit surprising is why it took this long for the secular left media to make such charges. But better late than never I guess for these guys. Never let a good crisis go to waste, especially if you can target Christians.

But wait, there’s more. Get this: in the very same propaganda sheet we have another doozy of a piece arguing for diabolical idiocy: We need MORE abortion during the corona crisis. On March 26, 2020 the Editorial Board ran with this piece: “Make Abortion More Available During the Pandemic — Not Less.”

It begins this way: “This crisis has underscored the need for greater access to reproductive health care.” And it finishes with these words:

Finally, it’s long past time to end America’s bans on government funding for abortions, like the federal Hyde Amendment and similar state measures. These bans mean that poor women already struggle to afford reproductive health care — an issue that’s sure to be exacerbated during the coronavirus crisis and the economic fallout from it. With so much about the future uncertain for countless Americans, it’s more important than ever that everyone has control over their reproductive choices, at least. www.nytimes.com/2020/03/26/opinion/abortion-law-coronavirus.html

Um, no, pregnancy is NOT a disease, and killing babies is NOT health care. And NO, we should not be forced to pay for the murder of the innocents. But this is after all the NYT. They claim to want to save lives in the corona crisis, and seek to blame Christians for it. But open slather on baby murder is just peachy.

The devilish folks running the NYT would make even Nero look rather tame and rational in comparison.

15 Replies to “Crisis, Corona and Christophobia”