How should believers think about the death of evil dictators?

At the moment much of the world is wondering if the diabolical dictator of North Korea Kim Jong-un is alive or dead. Not only has he not been seen for several weeks now, but the overweight, chain-smoking, wine-drinking thug is a prime candidate for heart disease and related health problems. So who knows? He might already have passed away.

I have written before about what a devilish hell-hole North Korea is. It is especially horrific for Christians. One report from last year said this in part: 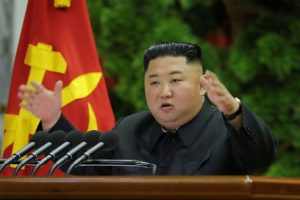 North Korea is number one on Open Doors World Watch List of countries where Christian persecution is the worst, a position it has maintained for 18 years. Practicing any religion that is not sanctioned by the government is punishable by death in North Korea. In fact, 100 percent of all defectors interviewed said there is zero religious freedom in the country. Additionally, 98 percent of defectors said the only facilities for worship are located in Pyongyang and are simply there as a display for tourists. believersportal.com/over-75-christians-in-north-korea-die-in-persecution/

Thus in so many ways it would be a real godsend if this monster was no longer allowed to terrorise, imprison, torture, starve and murder his own people. Of course whoever replaces him might turn out to be just as bad. His 32-year-old sister Kim Yo-jong might be the one to succeed him, but she likely will also ensure the full military control of the nation.

But it is still a good thing in my books if someone as bad as the current leader is out of the way. And I speak here not just as a lover of freedom and democracy, but as a Christian. Many believers will get quite uptight at this point, but I actually think it is a good thing when evil rulers who have shown no signs of repenting of their many sins are removed from power.

My prayer for wicked tyrants like this is always the same: I ask God to improve them or remove them. I pray that they might become gloriously saved, or that they will lose office. And we do have texts like Psalm 109:8 to appeal to here: “Let his days be few and brief; And let others step forward to replace him.”

However, whenever I discuss the death of a dictator it always happens: someone will throw out Ezekiel 18:23. That is a good text to keep in mind here, but it certainly is not the only one. Indeed, a few such texts can be found, but well over 200 passages can be offered to give a different angle on this. Let me explain.

One could also mention a passage like Proverbs 24:17-18: “Do not gloat when your enemy falls; when they stumble, do not let your heart rejoice, or the LORD will see and disapprove and turn his wrath away from them.” If those were the only texts we have about the death of the wicked, or how we should think about God’s enemies, that might be the end of the matter.

But as I said, we actually have hundreds of passages which speak about the defeat or death of God’s enemies (who are often the enemies of God’s people), and how praise and worship go up to God when they meet their just end. These texts too must be carefully considered.

We cannot pretend such verses simply do not exist. We could stop here, and I could simply point you to at least four other articles I have written in which I list quite a few of these verses. Here they are:

I encourage you to have a read of those pieces, but let me offer more of these passages here. Because there just are so many of these verses, I have to be very selective. One passage I usually appeal to because of its importance is Exodus 15 which presents to us the Song of Moses and Miriam.

So what were they singing about and praising God for? The exodus from Egypt had just occurred of course, and in the previous we read about how the evil Pharaoh and his army were miraculously destroyed in the Red Sea. Moses and the Israelites sing this song as an act of worship, exalting in the destruction of their enemies. As we read in vv. 19-21:

“When Pharaoh’s horses, chariots and horsemen went into the sea, the LORD brought the waters of the sea back over them, but the Israelites walked through the sea on dry ground. Then Miriam the prophet, Aaron’s sister, took a timbrel in her hand, and all the women followed her, with timbrels and dancing. Miriam sang to them:

‘Sing to the LORD,
for he is highly exalted.
Both horse and driver
he has hurled into the sea’.”

There is no squeamishness here or reticence about rejoicing and worshiping God over something quite specific: the overthrow and death of some very evil people. But we find this occurring over and over again in the Bible. The life of King David offers plenty of examples of this. Let me offer a few clear cases of this.

In 2 Samuel 22 David sings praises to God for the defeat of his enemies. Here are just some of the verses:

4 “I called to the Lord, who is worthy of praise,
and have been saved from my enemies.

18 He rescued me from my powerful enemy,
from my foes, who were too strong for me.

38 “I pursued my enemies and crushed them;
I did not turn back till they were destroyed.

41-43 You made my enemies turn their backs in flight,
and I destroyed my foes.
They cried for help, but there was no one to save them—
to the Lord, but he did not answer.
I beat them as fine as the dust of the earth;
I pounded and trampled them like mud in the streets.

48-49 He is the God who avenges me,
who puts the nations under me,
who sets me free from my enemies.
You exalted me above my foes;
from a violent man you rescued me.

Indeed, we have dozens of psalms in which the destruction and death of enemies become the source of praise and worship. Consider a few verses from Psalm 18 (vv.37-43):

I pursued my enemies and overtook them;
I did not turn back till they were destroyed.
I crushed them so that they could not rise;
they fell beneath my feet.
You armed me with strength for battle;
you humbled my adversaries before me.
You made my enemies turn their backs in flight,
and I destroyed my foes.
They cried for help, but there was no one to save them—
to the Lord, but he did not answer.
I beat them as fine as windblown dust;
I trampled them like mud in the streets.
You have delivered me from the attacks of the people;
you have made me the head of nations.

but you give us victory over our enemies,
you put our adversaries to shame.
In God we make our boast all day long,
and we will praise your name forever.

And recall one of the great triumphs of God’s people over wicked rulers: the defeat of the evil Haman and his followers as found in the Book of Esther. Have you ever heard of the Feast of Purim? What is that all about? It is about the Jews praising God for the death of tyrants; it is about celebrating the death of God’s enemies. Consider Esther 8:11-17:

The king’s edict granted the Jews in every city the right to assemble and protect themselves; to destroy, kill and annihilate the armed men of any nationality or province who might attack them and their women and children, and to plunder the property of their enemies. The day appointed for the Jews to do this in all the provinces of King Xerxes was the thirteenth day of the twelfth month, the month of Adar. A copy of the text of the edict was to be issued as law in every province and made known to the people of every nationality so that the Jews would be ready on that day to avenge themselves on their enemies. The couriers, riding the royal horses, went out, spurred on by the king’s command, and the edict was issued in the citadel of Susa. When Mordecai left the king’s presence, he was wearing royal garments of blue and white, a large crown of gold and a purple robe of fine linen. And the city of Susa held a joyous celebration. For the Jews it was a time of happiness and joy, gladness and honor. In every province and in every city to which the edict of the king came, there was joy and gladness among the Jews, with feasting and celebrating. And many people of other nationalities became Jews because fear of the Jews had seized them.

And guess what? We find the same in the New Testament. Simply consider the book of Revelation and the massive praise sessions that break out when Christ judges the wicked. Here are just two of them:

Revelation 16:4-7 The third angel poured out his bowl on the rivers and springs of water, and they became blood. Then I heard the angel in charge of the waters say:

“You are just in these judgments, O Holy One,
you who are and who were;
for they have shed the blood of your holy people and your prophets,
and you have given them blood to drink as they deserve.”

And I heard the altar respond:

“Yes, Lord God Almighty,
true and just are your judgments.”

Revelation 18:20 “Rejoice over her, you heavens!
Rejoice, you people of God!
Rejoice, apostles and prophets!
For God has judged her
with the judgment she imposed on you.”

As I say, we have hundreds of passages just like this found throughout the Bible. So, the moral of the story? There is clearly a place for Christians to rejoice in the downfall of evil, in the end of evil rulers, and the establishment of political and national righteousness.

We should share with the biblical writers this love of righteousness and celebrate the defeat of evil. So how am I going to pray for folks like the North Korean dictator? As I already said, I will pray that by God’s grace they get gloriously converted and turn from their wicked ways, or I will pray that their days will be short.

9 Replies to “Dictators and Death: The Biblical Response”