Many folks will not know this – including plenty of Australians – but exactly 250 years ago today the British explorer James Cook landed at Botany Bay, resulting in the birth of modern Australia. He had earlier circumnavigated New Zealand before sailing up the east coast of Australia. He had left England on a small vessel called the Endeavour in 1768, and landed in present day Sydney on Sunday April 29, 1770.

A good part of the reason why so few will know about this today is because of the secular left and its black armband view of history. This is the notion that there is nothing to celebrate about Australia’s discovery and founding because white Europeans are only always evil, and they have done only great harm wherever they have gone. Exploitation, invasion, racism, sexism and imperialism are the terms they use to describe our founding and development. 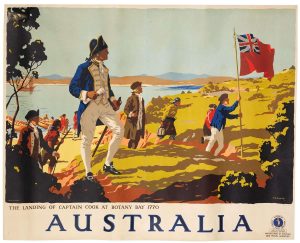 Western civilisation has got to go, don’t you know, according to this mob, and there is nothing in our past worth celebrating or promoting. They prefer the pure and unadulterated primitive societies that of course could do no wrong. Never mind that this revisionist history is simply fake news.

Indeed, back in 1992 Robert Edgerton wrote an important volume entitled Sick Societies: Challenging the Myth of Primitive Harmony (Free Press). He demonstrated conclusively that plenty of these early societies were hardly utopias of sweetness and light.

But these hate-Australia-first folks prefer to keep attacking the land they live in, and refer to Australia Day as “Invasion Day” and the like. Oh dear. But I have dealt with that silliness elsewhere: billmuehlenberg.com/2017/01/26/australia-day-invasion-day/

So let me ignore the naysayers and the critics, and look briefly at just what transpired a quarter of a millennium ago. There are various ways to do this. Plenty of books and articles exist describing the amazing voyage of Captain Cook. Let me quickly mention a few.

For those interested in the Christian roots to all this, one book is Southland of the Holy Spirit by Elizabeth Rogers Kotlowski and Graham McLennan (Christian History Research Institute, 1994). While long ago out of print, you can find the full text of it online here: www.chr.org.au/books/southloand-of-holy-spirit/

Let me draw a bit from the chapter on Cook:

Cook’s next major assignment was in the Pacific. For several centuries, the Europeans had been speculating about a southern continent. The British feared the French might find it first, so while ostensibly putting together an astronomical expedition to an unknown destination in the Pacific to observe a transit of Venus on 3 June 1769, the Lords of the Admiralty secretly instructed Cook to find a new continent. Cook made three voyages to the Pacific between 1768 and his premature death in 1779. It was on his first voyage that he discovered the east coast of Australia. His ship, the Endeavour, sailed from Plymouth on 26 August 1768, without any fanfare or saying of prayers….

In 1770, Lieutenant (later Captain) James Cook landed at Botany Bay’s Inscription Point. He and his Endeavour crew stayed in the area for eight days and had a dramatic impact on Australian history. Located near Silver Beach on the Kurnell Peninsula headland, Cook’s landing place is a popular Sydney attraction. Now heritage-listed, this reserve interprets the story of the meeting of European and Aboriginal cultures.

Visit Kamay Botany Bay National Park to discover Captain Cook’s landing place yourself. The best way to get there is along the Burrawang walk that features a soundscape of Aboriginal children’s laughter. As you pass over the dune you’ll see views of the bay where the Endeavour was first sighted. A small plaque marks the location where Captain Cook landed.

As to his religious views, they write:

The entry Cook wrote in his diary [when landing at Botany Bay] sharpens the contrast between him and his predecessors, whether from Roman Catholic or Protestant Christendom. For where Magellan’s and Quiros’ men had taken the sacrament, and Tasman had beseeched God Almighty to vouchsafe His blessing on his work, Cook recorded the facts: ‘At 2 p.m. got under sail and put to sea.’

Cook was an Anglican. His son, Hugh, was to enter the Anglican ministry, but died prematurely. Several writers on Cook referred to him as a Christian. Cook was a good man: above reproach in his morals; moderate in all things; compassionate and conciliatory in his treatment of the natives; always concerned about the welfare of his men; a man of great courage and determination; cool and just in judgement; controlled in speech even when angry. He would not allow profanity on board (which even professing Christians tolerate these days). He required his men to wear clean clothes on Sunday, and, on occasions he conducted divine service for his crew. This would suggest that he certainly would have been sympathetic, not indifferent or hostile, to the faith.

Cook’s wife gave him a Prayer Book, which he probably read in order to name a number of places discovered on significant days, such as the Whitsundays, Trinity Bay, Christmas Island, and Pentecost Islands.

After Cook continued to sail up the east coast, an incident occurred that almost terminated the voyage and their lives. There was a danger lurking beneath the waters of which Cook was unaware. It was the Great Barrier Reef. On Trinity Sunday, 10 June, the Endeavour struck a reef and stuck fast. After much work, the crew managed to free her and steered the damaged ship towards a river-mouth, where the banks were suited to laying the vessel ashore for repairs. That was 16 June. It was not until 4 August that Cook was ready to leave, but it was not long before the Endeavour was headed for the reef again. Without any wind and the seas being too deep to cast anchor, the ship was slowly but surely driven by the force of the tides towards certain destruction. Cook knew the Endeavour would smash and sink in a moment when it struck that perpendicular wall. The men manned the boats and tried to tow her away; it was useless. They were eighty yards away when “suddenly, a little breath of air moved, blew for a few minutes, faded, the merest cat’s-paw”. It was enough to carry them towards a narrow opening in the reef, but there was still no wind. How much longer could the Endeavour endure? Another narrow opening was seen in the reef and Cook pulled the head of the ship around. At last a light breeze sprang up, and with the tide being in their favour, hurried the vessel through this “Providential Channel” as Cook named it, as he anchored in safe waters.

It had been “the narrowest escape we ever had and had it not been for the immediate help of Providence we must inevitably have perished”, said Richard Pickersgill, the master’s mate Cook, in his entry for 16 August 1770, after describing their desperate situation, wrote, “It pleased God at this very juncture to send us a light air of wind, which, with the help of our boats, carried us about half a cable’s length from the present danger”. www.chr.org.au/books/southloand-of-holy-spirit/page6.html

I strongly encourage you to explore the Christian History Research site. Graham McLennan has done a superlative job of bringing together in one place masses of detailed and fascinating information on the Christian history of Australia: “Resources can be used online and many can be downloaded for educational use and personal research. Included on the site you will find interactive applications, books, documents, maps, video and audio and more.” www.chr.org.au/

Another excellent volume to utilise here is a brand-new book by renowned Australian historian Geoffrey Blainey called Captain Cook’s Epic Voyage (Penguin, 2020). Actually it is a revision of an earlier work of his, the 2009 Sea of Dangers. But in some 300 pages he tells the incredible tale of Cook’s voyage from the UK to down under.

He says this in the preface to the revised edition: “…his discovery and its consequences are now questioned by Aboriginal leaders and by some historians. In Sydney his statue was recently vandalised. The great navigator is branded as an invader and destroyer. This book concludes with praise of Cook in the light of this controversy and also calls for recognition of the Aboriginal discoverers of Australia tens of thousands of years ago.

And here are some of his final words:

Understandably, modern Aboriginal leaders will continue to blame Captain Cook for ending their long period of relative isolation from the outside world.

And yet most Aboriginal and Torres Strait Islanders who are alive today have gained from the arrival of Western civilisation and its material benefits, though in the short term – perhaps for three or four generations – the majority suffered, and suffering for many continues to this day. The Torres Strait Islanders did not suffer in the same way. They actually celebrated the coming of the Europeans and their Christian message – they called it not an unwelcome invasion but the Coming of the Light….

Captain James Cook himself remains a hero. One of the most remarkable voyagers in the long history of the seas, he deserves far more praise than blame. Contrary to the common belief, he admired the Aborigines and facets of their traditional way of life. Above all he grasped this continent and began unknowingly the work of knitting it again to the outside world. On the whole the outside world has gained because of his epic voyage. The settlers who arrived after him eventually made this land so productive that it is capable, almost annually, of feeding tens of millions of people in foreign lands as well as those in Australia. Here flourishes a democratic society which offers freedom in a world where freedom is not- and never was – the right of most people.

Exactly. I for one – even as an American import – will rightly celebrate what this great man did. May there be many more like him.

22 Replies to “James Cook and Australia”