We all should be alarmed at government overreach in the corona crisis:

“Gathering outdoors is the next freedom to be restored,” said a front-page article from the Daily Telegraph. Um, am I the only one who was shocked by that sentence – and others like it? Gosh, isn’t that swell of the State to allow us to go outside a bit. So very kind of them. 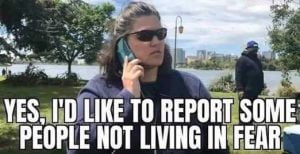 Um, since when was it the right of governments to simply take away our right to freely assemble as we decide in the first place? Am I now supposed to grovel before the State and thank them profusely if they take away my right to eat or breathe and then ever so graciously give it back – if I behave?

I have said it before and I will keep saying it (no matter how much the alarmists dislike me for doing so): The two most shocking things about the corona crisis are these: one, the absolute speed and ease in which governments have shut down and locked down entire nations; and two, the ready, eager and unquestioning acceptance of all this by the masses.

BTW, I have been saying this for several months now. However, just moments ago I saw a brand-new article by Dennis Prager in which he says this: “But the ease with which police state tactics have been employed and the equal ease with which most Americans have accepted them have been breathtaking.” Hmm, we sure seem to be on the same page here.

And all this has utterly shocked me and saddened me. Yes it really has. Worse yet, I fully realise that the only thing so many folks are worried about is when their beloved footy team will be playing again. But there actually are some things that matter a whole lot more. Like freedom. Like the individual. Like democracy. Like the rule of law. Like the ability to think for oneself and ask questions.

But far too many folks really do not seem to give a rip that so much of this is being taken away from us. The masses just do not seem to care. The sheeple could not be bothered with even raising an eyebrow here. Too many simply trust the government implicitly. ‘My country right or wrong’ has now morphed into ‘My State right or wrong.’

And even more shocking is how many Christians have fallen into line here. ‘Well the government said it, so it must be right. Who am I to question?’ And, ‘Why are you so worried about technology? What could ever go wrong?’ Hmm, why do I suspect that far too many of these naïve, apathetic and undiscerning believers would just as happily intone, ‘The State is my shepherd’?

Or as Ben Davis has recently put it:

Our Government in Canberra,
Hallowed be thy name,
Give us this day our daily support payments,
And increase our debts.
Lead us not into temptation to violate your stay at home orders,
But deliver us from COVID-19.
For the power and glory are yours,
Amen

And when Big Tech and the Big State get into bed together and fully support each other in this draconian overreach and abuse of power, then you know we really are getting to the end of freedom as we know it. I have been documenting this for quite a while now, but for too many folks it simply goes in one ear and out the next.

Let me offer just one scary case in point of what we are up against. For a few days now I – and millions of others – have shared a very important, fact-filled video of two California doctors sharing informed, balanced and evidence-filled concerns about the accepted narrative on corona.

They have dared to ask how a nation-wide lockdown makes any sense, based on all that we now know about COVID-19, how it spreads, who is really at risk, and so on. It was seen over 5.5 million times. But then YouTube decided that you – the people – are too stupid and it is too dangerous to have a video like this being seen.

So they pulled it. The head honcho said that only points of view that go along with groups like WHO will be allowed. Um, if anyone thinks that WHO has handled this whole crisis well, they need to go to the back of the class. Here is just one of many pieces on the appallingly bad way that WHO has dealt with this: thefederalist.com/2020/04/09/why-the-who-is-a-danger-to-public-health/

And see this damning expose of the head of WHO: www.breitbart.com/politics/2020/04/10/5-shocking-facts-about-who-chief-tedros-adhanom-ghebreyesus/

But the censors and mind-controllers at YouTube, Twitter, Facebook, and so on have all decided that certain ideas and points of view are now verboten. The people will NOT be allowed to get a differing point of view. You will only be allowed to hear what the State thinks you should hear. But I refuse to submit, and the full 68-minute video can be seen here: newtube.app/user/anthony/GlkxUvo

Please watch it and share it. One article explains the situation with this pulled video:

Drs. Dan Erickson and Artin Massihi … decried California’s COVID-19 related lockdown in particular on medical and economic grounds. Part 1 carried the heart of the doctors’ remarks in about 50 minutes…. They focused on their own experience and widened the discussion to take in California generally. They made many of the same points we have been making here over the past month, but tied the discussion to their experience as physicians and owners in the business of treating patients in need of urgent care.

Laura Ingraham invited Dr. Erickson on for a segment of her FOX News show last night, and she got action! As events transpired, she was able to report in real time that YouTube had removed the viral part 1 video following the segment — for violating YouTube’s terms of service, of course. www.powerlineblog.com/archives/2020/04/was-it-something-he-said-4.php

Another Fox News host who has constantly been trying to sound the alarm on all this is Tucker Carlson. This short video clip is also must-viewing and must-sharing: video.foxnews.com/v/6152742822001

In it he examines the collusion of Big Tech and Big Government, discusses the censored video, and then says this: “Of all the many ironies of this moment, so many of them bitter, the hardest to swallow is this one: As we fight this virus, we are becoming far more like the country that spawned it – we are becoming more like China. It’s horrifying.”

I mentioned just above a new piece by Dennis Prager. Let me speak to it a bit further. In it he offers these 4 signs of a police state:

No. 1: Draconian laws depriving citizens of elementary civil rights.
No. 2: A mass media supportive of the state’s messaging and deprivation of rights.
No. 3: Use of police.
No. 4: Snitches.

He concludes the article this way:

It is said that about 1 in every 100 East German citizens were informers for the Stasi, the East German secret police, as superbly portrayed in the film “The Lives of Others.” It would be interesting, and, I think, important, to know what percentage of New Yorkers informed on their fellow citizens. Now, again, you may think such a comparison is not morally valid, that de Blasio’s call to New Yorkers to serve a Stasi-like role was morally justified given the coronavirus pandemic. But you cannot deny it is Stasi-like or that, other than identifying spies during World War II, this is unprecedented in American history at anywhere near this level.

This past Friday night, I gathered with six others for a Shabbat dinner with friends in Santa Monica, California. On my Friday radio show, I announced I would be doing that, and if I was arrested, it would be worth it. In my most pessimistic dreams, I never imagined that in America, having dinner at a friend’s house would be an act of civil disobedience, perhaps even a criminal act. But that is precisely what happens in a police state. townhall.com/columnists/dennisprager/2020/04/28/our-dress-rehearsal-for-a-police-state-n2567744

Lastly, let me take that final point about snitching and share what another writer has said about it:

That is not America. In East Germany, the Communists built a collective of informants. In the Soviet Union, informing on your neighbors and even your parents proved your loyalty to the state. This behavior has no place here. We’re Americans. Our first allegiance is not to the state, but to each other. In America, treason is not a betrayal of the state, but of the rights of the individual to be free of the state. Socialists betray the individual to the state and their pandemic response reinforces that first betrayal of the individual. It is no coincidence that the 1-800-INFORM phenomenon has taken root in the blue parts of the country. The culture of informants values the collective and suppresses the individual.

To the socialist, governments never fail. The experts are always wise and the public officials all-knowing. Government only fails because individuals subvert, sabotage, and undermine its well-meaning efforts. The informant helps the authorities redirect the blame for their failures by locating individual scapegoats. A nation of informants can only arise in a socialist system where people put the state first. They scowl and plot against their neighbors, spying and informing on them for the freedom they feel in their souls. The pandemic is a threat to the body of the nation, but 1-800-INFORM threatens the soul. thewashingtonstandard.com/1-800-inform-report-your-neighbors-to-authorities-its-the-un-american-way/

There are so many things happening right now that should concern every single one of us. And what concerns me so very much is that so few people seem concerned at all!