Here are another 25 gems from the great Christian apologist:

The legacy of Ravi Zacharias will last well beyond all the years he spent on earth (74). For half a century he ministered gospel truths all around the world, speaking to kings, royalty, politicians, students, and anyone who would listen. His impact was enormous.

And that impact will continue for many decades – even centuries – to come. He of course has many hundreds of his talks that can be viewed or listened to on the internet, and he has penned over 25 books (with a few of them yet to appear).

In my first article on the death of the great apologist, I featured 28 quotes from him: billmuehlenberg.com/2020/05/19/vale-ravi-zacharias/

My next article featured 25 more quotes – one from each of his books: billmuehlenberg.com/2020/05/20/25-key-quotes-from-ravi-zacharias/ 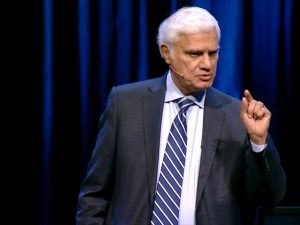 If your math skills are especially well-honed, you will know this means that with these 25 further quotes I have shared 78 quotes of his so far. One could easily share hundreds more, so this may not be my last article offering choice quotes from the great Christian apologist.

As such, I have once again lugged my collection of Zacharias volumes from my bookshelves onto my desk, and I have again briefly read through them to offer some more nuggets of wisdom and insight from the great man. Here then are another 25 quotes from the 25 books by Zacharias. I again present them in order of when the book was released:

“One cannot rescue the beneficial aspects of Christian morality while doing away with Christ. One cannot salvage the Ten Commandments while destroying the authority of the books of Moses.” A Shattered Visage (1990, p. 49)

“I am thoroughly convinced that when the last chapter of humanity is written, we will find that the implications of atheism, i.e., living without God, if consistently carried through, will have made life plainly unlivable within the limits of reason or even common sense.” Can Man Live Without God? (1994, p. 57)

“The open mocking of the sacred by the modern critic culminated a long process of desacralizing life itself. First the world was denuded of transcendence, then the Scriptures were rendered irrelevant, and finally humankind was made nothing more than matter.” Deliver Us From Evil (1996, pp. 51-52)

“What oxygen is to the body, the Bread of Life is to the soul. Without that bread, all other hungers will be improperly perceived. In fact, in like manner, the absence of that bread over a prolonged period makes the bread itself seem worthless. Life is meant to be lived with the fulfillment of the one need that defines all other means of fulfillment and the one love that defines all other loves.” Jesus Among Other Gods (2000, p. 87)

“[Jesus to the Buddha]: The purpose in life, Gautama, is communion, not union. There can be no meaning when the goal is to meditate oneself into oblivion. But meaning is found in a relationship with the living God. That’s what it’s all about—a relationship. And I am the one who is the way, the truth, and the life.” The Lotus and the Cross (2001, p. 73)

“When freedoms are so restricted in Islamic countries that no Muslim is allowed to disbelieve in Islam with impunity, is that a good Muslim law or a bad one? The freedom to believe – or not – is one of the most sacred privileges of the human mind. That freedom is taken away in the name of Islam. Is that good or bad? There is no religious freedom in most Islamic countries.” Light in the Shadow of Jihad (2002, p. 49)

“There are three inclinations Satan appeals to and three steps in every temptation. In understanding this, you’ll see the distortion. The evil one appeals to three basic hungers – food, power, and pleasure. He wants all of these met autonomously. He demands the miracle for the wrong reason. He calls upon God for the wrong motive. He offers the world, but it isn’t his to give. The hungers are all misdirected.” Sense and Sensuality (2002, p. 67)

“Paul’s point of entry was where his listeners were in their own thinking; and while his goal was to expose their intellectual failure, he began by affirming their spiritual hunger.” Is Your Church Ready? (Editor, with Norman Geisler, 2003, p. 81)

“I thought of the losses our culture has suffered over the last three decades. As Christians we happily wandered throughout the land with the Bible in our hands, preaching it yet leaving it unprotected from the vandals who sought to snatch it and leave us somewhat disorientated.” Who Made God? (Editor, with Norman Geisler, 2003, p. 81)

“True love is a thing of the heart and must be raised to what God intends it to be. It can never be fully expressed until it has been totally given first to God.” Recapture the Wonder (2003, p. 123)

“The truth is that God calls us to first practice truth in private so that its public expression is merely an outgrowth of what has already taken place in the heart and not a decoration over a hollow life. Developing that strength of character in private is foundational.” I, Isaac Take Thee, Rebekah (2004, p. 124)

“From the Christian perspective we see the finger of God in all of history, and Christ as its central figure. The Christian explains history through the eternal eyes of Christ. By contrast, the traditionalist lives for the past; the existentialist lives for the now; and the futurist or utopian lives for the future.” The Real Face of Atheism (Revised version of A Shattered Visage, 1990, 2004, p. 144)

“Jesus never sought to bring in His kingdom by our means. His is neither a pure democracy nor an imposed autocracy. He sought to win the hearts of men and women who in turn will live their lives conformed to the image of God’s Son, respecting the intrinsic dignity of each individual person and understanding true freedom.” The Lamb and the Fuhrer (2005, p. 88)

“The lines have become clearly drawn, and it is up to the thinking Christian to train the mind, take seriously the questioner, and respond with intelligence and relevance. I can honestly say that on every campus we visit, the response is beyond what we ever expected. Yes, truth is on the scaffold, as James Russell Lowell wrote, but the scaffold is swaying the future, and God is in the shadows, keeping watch — keeping watch upon His truth and upon His own.” Walking from East to West (2006, p. 210)

“The role of the apologist is to win the person, not the argument. That happens when the real questions surface and the real value of the questioner is upheld. Don’t get baited into personal attacks.” Beyond Opinion (Edited by Zacharias, 2007, p. 334)

“The break of communion with God caused our break with one another, even within the same family. Brokenness well describes the human condition. Humanity will never find unity until it can understand the reason for that brokenness and the expression of Jesus’ broken body and shed blood: ‘this is my body given for you’…” The Grand Weaver: How God Shapes Us Through the Events of Our Lives (2007, p. 140-141)

“Jesus said, ‘I have come that they might have life, and have it to the full’ (John 10:10) He didn’t talk just about the way to live; he argued principally for the truth by which to live. The objective informs the subjective.” The End of Reason (2008, p. 82)

“[Jesus to Krishna]: Here is another difference between what we teach. Abraham was called the ‘man of the tent’ and the ‘man of the altar’ in his time. This was because he understood that life is temporary and sacred. Your assertion that everyone has pre-existed is totally contrary to my teaching. You teach that life, or history, is cyclical. I teach that life, or history, moves in a straight line. I teach that it is appointed to every man, woman, and child to die once and after that to face judgment before God.” New Birth or Rebirth? (2008, p. 41)

“Jesus’ resistance to political power was a remarkable caution about top-down belief systems. In the gospel message, the beginning of change occurs in the heart of each individual. This heart change makes a difference in the home, then in the community, and ultimately in the nation – and in turn it shapes the future of a cultural ethos.” Has Christianity Failed You? (2010, p. 188)

“In the end truth will triumph, whether we like it or not. To sound grand and magnanimous by saying, ‘I accept all religions,’ is actually to either violate them all or violate reason, or both. We all have a right to proclaim what we believe about ultimate things. But that does not mean that everything we believe is right.” Why Jesus? (2012, p. 101)

“There is a purpose to life, and sin is the violation of that purpose. The starting point of dealing with pain is to understand and accept that there is a purpose to your life and to mine. We are not just thrust into existence indiscriminately; rather, we are here by the divine will of our Creator God.” Why Suffering? (With Vince Vitale, 2014, p. 46)

“The fork in the road is obvious: Pantheism deludes you into an inflated sense of who you are, and naturalism reduces you to nothing more than a thinking machine. One is self-deifying, the other is reductionistic. Neither extreme is true or empirically justifiable.” Jesus Among Secular Gods (With Vince Vitale, 2017, p. 179)

“Temples or churches are a vital part of a nation’s history because they are the focus of people’s ultimate allegiance. . . . Make no mistake about it. Every nation has its temples. They either exalt the state and diminish the individual or exalt the individual, who by choice submits to the will of His Creator. The first is a superimposed value; the second is a recognition of implicit value.” Seeing Jesus From the East (With Abdu Murray, 2020, p. 167)

Once again, it is hoped that in sharing such quotes you will be motivated to read him for the first time, or to reread him if you have already done so. And as mentioned, there may be more articles forthcoming in this informal series. At the very least, I get great pleasure and blessing from revisiting these 25 books from this great apologist and evangelist. God bless you Ravi Zacharias.