The Fourth of July has decidedly Christian roots:

Let me begin by saying two things. First, Happy Fourth of July (OK, maybe I am a day early given that I live down under). Second, this article is really due to a phone call I received yesterday. A good friend mentioned July 4 and the US Constitution, and with tears talked about how God was such a big part of America’s founding. Thanks Stan. This article is for you. 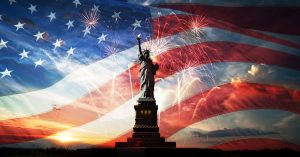 And for those of you not fully up on the American holiday and what it means, a few quick words. Independence Day of course commemorates the Declaration of Independence of the United States on July 4, 1776. Thus for 244 years now we have celebrated this day – the day America got its independence.

While the English may not have been too pleased with this event back then, it did lead to what has become one of the great nations on earth. To set the stage for what I want to discuss in this piece, it is worth quoting the opening lines of the Declaration of Independence:

The unanimous Declaration of the thirteen united States of America

When in the Course of human events it becomes necessary for one people to dissolve the political bands which have connected them with another and to assume among the powers of the earth, the separate and equal station to which the Laws of Nature and of Nature’s God entitle them, a decent respect to the opinions of mankind requires that they should declare the causes which impel them to the separation.

We hold these truths to be self-evident, that all men are created equal, that they are endowed by their Creator with certain unalienable Rights, that among these are Life, Liberty and the pursuit of Happiness.

As this and many other documents, writings and speeches from the time make clear, God did indeed feature prominently in the establishment of the United States of America. Sure, debate has long raged about this, with some arguing that the Founding Fathers were mainly deists and not really biblical Christians.

Plenty of ink has already been spilled on that discussion, with numerous books and articles that one can appeal to. I have written about all this before as well. See these pieces for example, which include some useful titles for further reading:

Here I want to draw upon just one new resource on this matter. I refer to a very helpful 2019 volume by Mark David Hall, the Herbert Hoover Distinguished Professor of Politics at George Fox University. The book is this: Did America Have a Christian Founding? Separating Modern Myth from Historical Truth.

In over 200 well-documented pages Hall carefully makes the case that America’s founding did indeed rest primarily on solid Christian convictions. As he says at the very beginning of his important book:

Scholars and popular authors routinely assert that America’s founders were deists who desired the strict separation of church and state. . . . These claims are patently and unequivocally false. This book demonstrates why, revealing the hollowness of assertions that most of America’s founders were deists; that they created a “godless” Constitution; that Thomas Jefferson and James Madison desired to build a high wall of separation between church and state; that the founders thought governments should never encourage religion; and that they advocated religious liberty because they were children of the Enlightenment. In addition to showing why and how these claims are wrong, I argue that America’s founders were influenced in significant ways by Christian ideas when they declared independence from Great Britain, drafted constitutions, and passed laws to protect religious liberty.

Yes, there were various influences at work upon the founders, such as “Lockean liberalism, classical republicanism, the Scottish Enlightenment, and so on. I contend that an excellent case can be made that Christianity had a profound influence on the founding generation.”

Another paragraph found early on in this book is worth presenting here:

Practically, and positively, a central argument of this book is that America’s founders drew from their Christian convictions to create a constitutional order that benefits all Americans, not just Christians. Their convictions led them, for example, to carefully limit the national government’s power; value checks and balances; support the rule of law; and protect a robust conception of religious liberty. There were few non-Christians in late eighteenth-century America, but there were some, and most of America’s founders were convinced that the right of these non-Christians to believe and act according to the dictates of their consciences must be protected.

Consider the issue of deism, which states that God created the world but then has taken a hands-off approach to it. There are often eight main figures held up as deists, including Franklin, Washington, Jefferson and Paine. But, says Hall, it is “striking that there are few instances of civic leaders in the era openly embracing deism or rejecting orthodox Christian doctrines.”

And in part it depends on how we define the term. Says Hall, “if deism includes the idea that ‘God set the world in motion and then abstained from human affairs,’ it is possible that only one of these men, Ethan Allen, was a deist. With the exception of Allen, all the founders regularly called deists are clearly on record speaking or writing about God’s intervention in the affairs of men and nations.”

As to the Declaration of Independence, God is referred to four times in the document. But critics say the references are too generic and nebulous, and just refer to things like “Creator” and “Providence.” However, Hall reminds us of other documents that are clearly biblical in nature but often did the same:

“For instance, the Westminster Standards, a classic Reformed (Calvinist) confession of faith, refer to the Deity as ‘the Supreme Judge,’ ‘the great Creator of all things,’ ‘the first cause,’ ‘righteous judge,’ ‘God the Creator,’ and ‘the supreme Law and King of all the world,’ both in the original 1647 version and in the 1788 American revision.”

Hall also examines the U.S. Constitution, ratified in 1788. At the close of the chapter on this he says:

Those who argue that the United States has a godless Constitution must do more than point out that the Deity is not referenced, or is referenced only once, in our nation’s fundamental law. Far more relevant are the religious convictions of the framers and ratifiers, and the sources and ideas from which they drew as they created America’s constitutional order. As we have seen, there is no good reason to accept the assertion that “many” or “most” of the founders were deists or even heterodox Christians, whereas there are excellent reasons to believe that they were influenced by the Bible and Christian political ideas.

Hall looks in more detail at various other matters, such as Jefferson, Madison and the First Amendment. All of this is well worth examining. But let me bring my piece to an end by offering his closing paragraph:

Having argued throughout this book that America did, in fact, have a Christian founding, I want to close by reemphasizing that the constitutional order the founders created has benefited citizens of every faith – as well as those who do not hold to any faith at all. One need not be a Christian to profit from limited government, checks and balances, and the rule of law. With respect to religion, the founders were clear that citizens of any faith are free to worship and act according to the dictates of their consciences. If we desire to honor their memory and legacy, we must continue to advocate these ideals today.

4 Replies to “Independence Day and the Christian Connection”