With a new woke war on racism, it is time to reconsider Darwin:

There is little doubt that by today’s standards, Charles Darwin promoted racist views. So when will all the woke activists, all the Antifa militants, and all the Black Lives Matter activists start pulling down every statue of Darwin that is out there?

For some reason I do not think we will see this happening any time soon. But the evidence for such claims is not hard to find. Simply read the full title of his most famous work from 1859, The Origin of the Species. It says this: On the Origin of Species by Means of Natural Selection, or the Preservation of Favoured Races in the Struggle for Life. 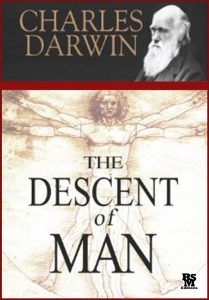 And of course his second most famous work is The Descent of Man, originally published in two volumes in 1871. This book simply applies to humans what he had said about animals in his earlier work. One of the more alarming quotes found there is this:

At some future period, not very distant as measured by centuries, the civilised races of man will almost certainly exterminate, and replace, the savage races throughout the world. At the same time the anthropomorphous apes, as professor Schaaffhausen has remarked, will no doubt be exterminated. The break between man and his nearest allies will then be wider, for it will intervene between man in a more civilised state, as we may hope, even than the Caucasian, and some ape as low as a baboon, instead of as now between the negro or Australian [aborigine]and the gorilla.

Many have noted the obvious connections between Darwin’s views, racism, and even white supremacy. Indeed, in a 1977 book evolutionist Stephen Jay Gould wrote this “Biological arguments for racism may have been common before 1859, but they increased by orders of magnitude following the acceptance of evolutionary theory.”

Let me fill in a few more details here, drawing upon four writers from the past 15 years or so. Back in 2004 Richard Weikart wrote a very important book, From Darwin to Hitler (Palgrave Macmillan). The subtitle makes clear his concerns: Evolutionary Ethics, Eugenics, and Racism in Germany. I have mentioned this volume elsewhere, eg.: billmuehlenberg.com/2009/02/02/on-celebrating-darwin/

As to the matter of racism he says this:

Racism obviously predated Darwinism, but during the nineteenth century – in part through the influence of Darwinism – it would undergo significant transformations. Before the nineteenth century, the intellectual dominance of Christianity militated against some of the worst excesses of racism. Christian theology taught the universal brotherhood of all races… [Darwin] explained that some races have much lower intellectual and moral faculties than Europeans. Emphasizing racial inequality thus served an important function in Darwin’s attempt to bridge the chasm between primitives and humans. Even though he opposed slavery and sometimes expressed sympathy for non-European races, nonetheless he believed a wide gap separated the “higher races” from the “lowest savages,” as he called them, who were inferior intellectually and morally akin to Europeans. This was not just a peripheral point of Descent, for in the introduction Darwin clearly stated that one of the three goals in his book was to consider “the value of the differences between the so-called races of man.”

And concerning eugenics and the Nazis, a few more quotes:

“It would be foolish to blame Darwinism for the Holocaust, as though Darwinism leads logically to the Holocaust. . . . To deny the influence of Darwinism on Hitler would also be foolish, however, especially since almost all scholars of Nazism acknowledge it.” And again:

“Darwinism by itself did not produce the Holocaust, but without Darwinism, especially in its social Darwinist and eugenics permutations, neither Hitler nor his Nazi followers would have had the necessary scientific underpinnings to convince themselves and their collaborators that one of the world’s greatest atrocities was really morally praiseworthy.”

In 2008 Benjamin Wiker discussed ten books that “screwed up the world”. My review of it is found here: billmuehlenberg.com/2008/09/10/a-review-of-10-books-that-screwed-up-the-world-by-benjamin-wiker/

Needless to say, he has a chapter devoted to The Descent of Man. He says that it “is impossible to distance Darwin from eugenics: it’s a straight logical shot from his evolutionary arguments.” He notes that others were happy to run with the logical implications of his famous 1859 volume:

It was Darwin’s own cousin, Francis Galton, who first elucidated the Origin‘s obvious conclusions for human beings in a two-part article in Macmillan’s Magazine in 1865, and then more completely in his book Hereditary Genius (1869). Darwin followed quickly with his own account, The Descent of Man. The obvious conclusion is eugenics. While Galton coined the term, Darwin provided the deep foundations and traced out the many implications.

Let us be clear about that. The pernicious aspect of Darwin’s Descent is not the mapping of our ancestry to chimpanzees or gorillas. Much the same inference, whatever its ultimate merit, might have been made from watching rugby. The deep-down nastiness of the Descent is eugenic: the idea that the “survival of the fittest” should be applied to human beings. The emphasis is important. Eugenics is an applied science. It applies the science of breeding to human beings as if they were racehorses, or more accurately, farm animals. The best are allowed to breed; the worst (or “unfit”) are eliminated. The Nazis would later apply this idea very effectively. As they saw it, natural selection is natural; nature favors the strong and picks off the weak. Society should not interfere with nature by artificially protecting the weak from destruction. Such charity is unnatural and hence unscientific. Instead, society should help natural selection with its work and wipe out the weak by even more efficient means. That is the science of eugenics.

It should be noted that a year after that volume appeared, Wiker came out with another – this time a full-length treatment of Darwin called The Darwin Myth. That incisive book has also been reviewed on this site. See here: billmuehlenberg.com/2009/07/08/a-review-of-the-darwin-myth-by-benjamin-wiker/

Several quotes from this volume will suffice:

If the fear of being swamped by biological defectives was a powerful motivator for eugenists, the hope of achieving biological perfection was equally inspiring. The eugenists’ naïve faith in modern science spawned a virulent utopianism. Dressed up in quasi-religious terminology, the eugenics faith promised to create heaven on earth through the magic of human breeding. The utopian vision had been a key part of the eugenics crusade from its inception. Francis Galton had promoted the goal of “gradually raising the present miserably low standard of the human race to one in which the Utopias in the dreamland of philanthropists may become practical possibilities.”….

Confident that modern biology had revealed to them how to breed a better race, eugenists set about putting their scientific ideas into action. A few months before the first International Eugenics Congress in 1912, a British eugenist aptly summarized the practical outlook of many eugenists around the world, including those in America. She observed that research had generated “fairly authoritative opinions about certain defects and the method of their transmission. The present necessity . . . is to convert these opinions into social action and legislation.” American supporters of eugenics were already well on their way to achieving that goal….

Bluntly put, the evolutionary process had led to the development of superior and inferior races. Americans were able to cite Charles Darwin himself in support of this idea—and did. Although Darwin opposed slavery and according to some scholars “personally opposed programs premised on the permanent inferiority of nonwhites,” he did maintain in The Descent of Man that human intellectual development was the product of natural selection and that there were significant differences in the mental faculties of “men of distinct races.” In the same book, Darwin disparaged blacks and observed that the break in evolutionary history between apes and humans fell “between the negro or Australian and the gorilla,” indicating that he considered blacks the most ape-like humans. Darwin also predicted that “at some future period, not very distant as measured by centuries, the civilised races of man will almost certainly exterminate and replace throughout the world the savage races.”

The racist cast of Darwin’s thought is difficult to deny, but that has not stopped some scholars from doing their best to downplay it….

Lastly, some quotes from a 2016 article, “The Dark Side of Darwinism,” are worth offering here:

I found that to determine whether or not Darwin’s theories are racist, the text of his books is revealing and conclusive. Information outside the text of The Descent of Man can help us understand the man behind the pen, but it does nothing to soften the brutal racism and white supremacism found in the text of his theory….

Over the course of the book, Darwin describes Australians, Mongolians, Africans, Indians, South Americans, Polynesians, and even Eskimos as “savages:” It becomes clear that he considers every population that is not white and European to be savage. The word savage is disdainful, and Darwin constantly elevates white Europeans above the savages. Darwin explains that the “highest races and the lowest savages” differ in “moral disposition … and in intellect” (36). The idea that white people are more intelligent and moral persists throughout. At one point, Darwin says that savages have “low morality,” “insufficient powers of reasoning,” and “weak power of self-command” (97).

The value of considering contextual details depends on which question we are asking. When wondering about Darwin himself, a full range of sources is applicable. However, when determining whether Darwin’s theories contain dangerous racial ideology, the alarming text of his theories cannot be at all softened or explained away with outside information. Now I understand why I’ve never been asked in a biology class to read the original text of Darwin’s theories: Our contemporary reverence for Darwin’s gentlemanliness and the pure scientific brilliance of his theories is an overly optimistic illusion that shatters upon a closer look at his publications.sites.williams.edu/engl-209-fall16/uncategorized/the-dark-side-of-darwinism/

If woke activists can go apoplectic about Aunt Jemima syrup, Uncle Ben’s rice, and other supposed cases of racism and white supremacy, it may be time for them to vent some of their fury on actual harmful historical examples of this. And they can start with Darwin and his hugely influential theories.

12 Replies to “Darwin, Racism and Eugenics”