He is not called Dictator Dan for nothing. He is not known for seeking to push all things Chinese (as in the Chinese Communist Party) on hapless and helpless Victorians for nothing. I refer to the Victorian Premier Dan Andrews who has almost singlehandedly destroyed this state, with one scandal, one outrage, and one bungled policy after another.

And he is at it again. His handling of the corona crisis has been a case study in ineptitude, incompetence and idiocy. For example, he was happy to have solo golfers and solo fishermen arrested for not “social distancing” but he allowed tens of thousands of angry leftists to march arm in arm, screaming out their protests about how certain lives matter. 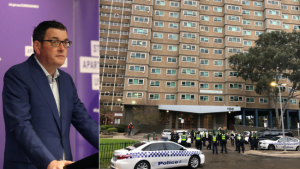 So now we are in turmoil again. Now we have new heavy-handed restrictions, with more being promised. All this is due to a supposed new spike, a second wave, of coronavirus. But what is the reality here? The truth is, testing has been radically ramped up in Victoria, so of course we are finding more cases. We always knew there would be many more cases than those actually confirmed. So when testing goes up, cases will go up.

But consider the actual numbers. Of late there have been over 20,000 tests a day (25,000 on July 5 alone). So far nearly a million tests in Victoria have been carried out. And the results? We have 2,660 confirmed cases, 600 active cases, with just a handful in ICUs, and just 20 deaths. Those with the virus make up a miniscule percentage, and those who have died from it comprise an even more minuscule percentage.

The real numbers to be concerned about are NOT 75 new cases a day or 100 new cases a day, but those who are in ICUs and those who have died. Those numbers are extremely low. Yet the government is again resorting to draconian and over the top lock down measures, now imprisoning entire suburbs and entire housing project populations.

All this is the fault of Dan Andrews. So we now have had ‘quarantine hotels’ – but with amateurs running the hotels, including private security guards with little or no training, who got far too close to the inmates – even with some having sexual liaisons with them. And people were able to leave the hotels without even being tested.

We now have 300,000 people in lockdown in a dozen postcodes (some 39 suburbs) in Melbourne’s north and west. And many residents have been waiting 10 days or more for their test results. And there are 3000 residents in nine housing commission towers that have been totally locked down. They cannot be freed until they are tested – but only 400 had been tested so far!

Some 500 police are patrolling these nine towers. Only six hours’ notice was given to these poor folks about their lockdown. And the food packages being delivered to them have been all rather useless: cereal without milk; bread spreads without bread; food stuffs well past their expiry dates, etc. There is a whole lot of resentment there already.

What utter chaos reigns in Victoria. It is the laughingstock of Australia. All the other states have declared that Victorians will not be allowed into their states (although all sorts of Victorian football teams have been allowed in – hmm…)

But to get the real story, we need to put a human face on all this. Here is one report making the rounds on the social media:

Just spoke to a friend who is a resident at one of the housing towers in Flemington. I asked her what she wants people to know and this is what she said.

“The way they have treated us is unacceptable. Where is the respect? The respect for us as humans. We want you to treat us as you expect your family to be treated. We heard about the lockdown and thought it would start at midnight so I went downstairs to get some food for my family but when I got down just after 4pm they had already locked us down. It is really scary for us to have all these police there, we can’t handle it mentally.

Many of us have come from countries with war and we are scared. 500 police! We look out the window and see all these armed police. Why are we being treated like this? No one else is being treated like this. Why couldn’t they give us time to get supplies? Why can’t we go to the shop like everyone else in other postcodes that are in lockdown? People are being treated differently from one side of the street to the other side.

We want everyone to be safe and my family will get through this, the children are going to find it very hard not being able to go outside. It’s going to be hard but we will be ok. But some people will find this really hard and we worry about their mental health as much as we worry about the virus. They might not get the virus but the impact on their mental health will be very bad. There are some very sick people living here, people who have had a very hard time and can’t handle seeing all these police. There are people here with serious illnesses.

The food they gave us this afternoon was tinned tomatoes and pasta, some people don’t eat those things. They say they will provide for all of us but there are 3000 people, you can’t knock on every door and buy the individual things everyone needs.

*We are interrupted by a loudspeaker announcement declaring that food can be picked up downstairs by only one member of the household. They must wear a mask and wash their hands. Covid testing will be at 10am tomorrow. A 1800 number is given for people to ring if they need assistance.*

I’m worried about the people who haven’t been here very long. Some can’t speak English and wouldn’t be able to ring that 1800 number. The single women with children. The elderly people. They’re too scared to come out of their flats and it’s hard for us to support each other because everyone is scared of getting the virus.

I want people to know that we don’t deserve to be treated like this.”

How horrific. How many folks there will suffer in so many ways? For example, how many will commit suicide (and I happen to know of a friend in another state who has attempted suicide, his condition being greatly exasperated by the lockdowns).

As one fellow said about this situation:

Think about this: if the government can lockdown apartment blocks overnight, with police outside people’s doors, make testing mandatory and make people dependent on the government for their food, they can do it anywhere else. How long do you think it’ll be until those in the high rise flats are told “if you don’t get tested, we won’t deliver your food”? This is outright authoritarianism and I think Flemington is just the test site. They’ll roll it out to other suburbs next then the whole state. Either you fight back or make yourself subject to the state. Today, it’s high rise towers in Flemington; tomorrow it could be your house.

Yes exactly right. The complete and total dictatorial powers of Dan Andrews seem to know no bounds. He can do whatever he wants, and barely a word of protest is uttered. Thankfully a few voices are being heard on the abuse of power in Victoriastan.

For example, Greg Sheridan wrote a piece in yesterday’s Australian entitled “Desperate Dan has only himself to blame for this mess.” He writes:

Daniel Andrews is now clearly the worst-performing, most unsuccessful premier or territory leader in Australia in managing the COVID-19 outbreak, despite being the most authoritarian. The Victorian government’s failure is damaging for Victorians and for the whole of Australia.

The rolling lockdowns in ever greater parts of Melbourne, with disadvantaged people now confined in tiny apartments in horrible high-rise buildings, is the direct outcome of the government’s botched performance.

Other states used some security guards but they were always supervised by police officers or ­soldiers or other uniformed personnel. That made all the difference in the world.

All the way through this crisis, Andrews has spoken in the most melodramatic terms about the life-and-death consequences of everyday decisions.

If you go out shopping, people will die, no pair of shoes is worth a life, etc. And he positively excoriated golf, apparently the devil’s own pastime.

Yet when faced with managing a group of people — international returnees going into quarantine — who were almost certainly carrying a disproportionate rate of virus infections, and who were possibly traumatised by the struggle many had to get home at all and were therefore likely to chafe against a fortnight in a hotel room, the ­Andrews government chose the least-trained workforce it could possibly imagine for the job.

This is staggering incompetence. Anyone familiar with the security industry knows how meagre its general training is. Now the security officers, who were neither trained nor equipped nor well paid for the job they were asked to do, have been effectively silenced. But their union has spoken out.

Guards were given 30 seconds training, meaning they just signed a form saying they’d read a piece of paper, or sometimes three minutes training, for the hotel roles. And this on the watch of the Premier who set up a regime that fined ­people for going to Bunnings when Bunnings was legally open.

Now in its customary politburo style, the Victorian government has decided it doesn’t need to answer a single question, nor accept a single iota of democratic accountability for this debacle until an ­official inquiry reports, presumably when the heat has gone out of the issue.

But there were political failures too. The Andrews government was happy to name all sorts of institutions with breakouts when it suited them politically, even a school linked to an inactive case to support the government’s then ­desire to keep schools shut.

But the Cedar Meats abattoir — Labor donors and full of Labor mates — had their identity protected until it was dragged out by the media. This turned out to be a very significant outbreak. Surely common sense tells you that naming them early would have encouraged any of their casual contacts to get tested. A measure of a political leader’s quality is how stringently they will speak to their own supporters when necessary. Andrews notionally discouraged demonstrators, but his efforts to get people not to attend the Black Lives Matter demonstrations were pitiful. www.theaustralian.com.au/commentary/desperate-daniel-andrews-has-only-himself-to-blame/news-story/e2b6137d6dcbad3aaf1a2a45d64d6d6f

Dictator Dan is a national embarrassment. He has got to go. But with so many people now suffering so greatly because of his moronic and inept policies, they really cannot wait until the next election.