President Trump’s Mount Rushmore speech is a must listen and share:

The militant left hates Trump, hates America, hates freedom, hates Christianity, hates the police, and hates just about everything decent and honourable. So here is a good rule of thumb: the more the leftists hate something, the more you can count on it being of great value and worth. 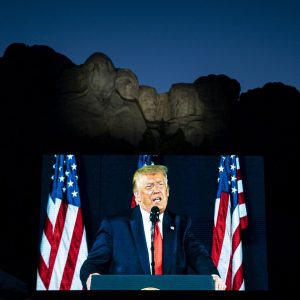 Consider how the unhinged left is going utterly apoplectic about the recent Trump speech. On July 4 the US President gave what many are regarding as his greatest speech ever. And he did it in front of historic Mount Rushmore.

But so deranged are the leftist militants that they made an all-out attack not just on Trump, but on the four leaders chiselled in stone as well. They actually believe that the 80-year-old national memorial is a symbol of white supremacy! Their unadulterated rage and anger has turned them all mad.

Given how much hatred and venom has been poured out on Trump and his speech over the past few days, it is obvious that this must be a superlative speech indeed. And it is. If you have not yet heard it, you must. The 40-minute speech can be viewed here: www.youtube.com/watch?v=mXD4zPY4Ai0

And it can be read in its entirety here: www.whitehouse.gov/briefings-statements/remarks-president-trump-south-dakotas-2020-mount-rushmore-fireworks-celebration-keystone-south-dakota/

Let me offer some of the key moments of this speech:

There could be no better place to celebrate America’s independence than beneath this magnificent, incredible, majestic mountain and monument to the greatest Americans who have ever lived.

Today, we pay tribute to the exceptional lives and extraordinary legacies of George Washington, Thomas Jefferson, Abraham Lincoln, and Teddy Roosevelt. (Applause.) I am here as your President to proclaim before the country and before the world: This monument will never be desecrated — (applause) — these heroes will never be defaced, their legacy will never, ever be destroyed, their achievements will never be forgotten, and Mount Rushmore will stand forever as an eternal tribute to our forefathers and to our freedom. (Applause.)….

Our Founders launched not only a revolution in government, but a revolution in the pursuit of justice, equality, liberty, and prosperity. No nation has done more to advance the human condition than the United States of America. And no people have done more to promote human progress than the citizens of our great nation. (Applause.)

It was all made possible by the courage of 56 patriots who gathered in Philadelphia 244 years ago and signed the Declaration of Independence. (Applause.) They enshrined a divine truth that changed the world forever when they said: “…all men are created equal.”

These immortal words set in motion the unstoppable march of freedom. Our Founders boldly declared that we are all endowed with the same divine rights — given [to] us by our Creator in Heaven. And that which God has given us, we will allow no one, ever, to take away — ever. (Applause.)….

THE PRESIDENT: Angry mobs are trying to tear down statues of our Founders, deface our most sacred memorials, and unleash a wave of violent crime in our cities. Many of these people have no idea why they are doing this, but some know exactly what they are doing. They think the American people are weak and soft and submissive. But no, the American people are strong and proud, and they will not allow our country, and all of its values, history, and culture, to be taken from them. (Applause.)

THE PRESIDENT: One of their political weapons is “Cancel Culture” — driving people from their jobs, shaming dissenters, and demanding total submission from anyone who disagrees. This is the very definition of totalitarianism, and it is completely alien to our culture and our values, and it has absolutely no place in the United States of America. (Applause.) This attack on our liberty, our magnificent liberty, must be stopped, and it will be stopped very quickly. We will expose this dangerous movement, protect our nation’s children, end this radical assault, and preserve our beloved American way of life. (Applause.)

In our schools, our newsrooms, even our corporate boardrooms, there is a new far-left fascism that demands absolute allegiance. If you do not speak its language, perform its rituals, recite its mantras, and follow its commandments, then you will be censored, banished, blacklisted, persecuted, and punished. It’s not going to happen to us. (Applause.)

Make no mistake: this left-wing cultural revolution is designed to overthrow the American Revolution. In so doing, they would destroy the very civilization that rescued billions from poverty, disease, violence, and hunger, and that lifted humanity to new heights of achievement, discovery, and progress…..

The violent mayhem we have seen in the streets of cities that are run by liberal Democrats, in every case, is the predictable result of years of extreme indoctrination and bias in education, journalism, and other cultural institutions.

Against every law of society and nature, our children are taught in school to hate their own country, and to believe that the men and women who built it were not heroes, but that were villains. The radical view of American history is a web of lies — all perspective is removed, every virtue is obscured, every motive is twisted, every fact is distorted, and every flaw is magnified until the history is purged and the record is disfigured beyond all recognition.

This movement is openly attacking the legacies of every person on Mount Rushmore. They defile the memory of Washington, Jefferson, Lincoln, and Roosevelt. Today, we will set history and history’s record straight. (Applause.)….

We know that the American family is the bedrock of American life. (Applause.)

We recognize the solemn right and moral duty of every nation to secure its borders. (Applause.) And we are building the wall. (Applause.)

We remember that governments exist to protect the safety and happiness of their own people. A nation must care for its own citizens first. We must take care of America first. It’s time. (Applause.)

We believe in equal opportunity, equal justice, and equal treatment for citizens of every race, background, religion, and creed. Every child, of every color — born and unborn — is made in the holy image of God. (Applause.)

We want free and open debate, not speech codes and cancel culture.

We embrace tolerance, not prejudice.

We support the courageous men and women of law enforcement. (Applause.) We will never abolish our police or our great Second Amendment, which gives us the right to keep and bear arms. (Applause.)

We believe that our children should be taught to love their country, honor our history, and respect our great American flag. (Applause.)

We stand tall, we stand proud, and we only kneel to Almighty God. (Applause.)

This is who we are. This is what we believe. And these are the values that will guide us as we strive to build an even better and greater future.

Those who seek to erase our heritage want Americans to forget our pride and our great dignity, so that we can no longer understand ourselves or America’s destiny. In toppling the heroes of 1776, they seek to dissolve the bonds of love and loyalty that we feel for our country, and that we feel for each other. Their goal is not a better America, their goal is the end of America.

THE PRESIDENT: In its place, they want power for themselves. But just as patriots did in centuries past, the American people will stand in their way — and we will win, and win quickly and with great dignity. (Applause.)

We will never let them rip America’s heroes from our monuments, or from our hearts. By tearing down Washington and Jefferson, these radicals would tear down the very heritage for which men gave their lives to win the Civil War; they would erase the memory that inspired those soldiers to go to their deaths, singing these words of the Battle Hymn of the Republic: “As He died to make men Holy, let us die to make men free, while God is marching on.” (Applause.)

They would tear down the principles that propelled the abolition of slavery in America and, ultimately, around the world, ending an evil institution that had plagued humanity for thousands and thousands of years. Our opponents would tear apart the very documents that Martin Luther King used to express his dream, and the ideas that were the foundation of the righteous movement for Civil Rights. They would tear down the beliefs, culture, and identity that have made America the most vibrant and tolerant society in the history of the Earth.

My fellow Americans, it is time to speak up loudly and strongly and powerfully and defend the integrity of our country. (Applause.)

I encourage you to watch, listen to, and read the entire speech. It is such an important antidote to the rhetoric of the radicals who would destroy everything and preserve nothing. And while you are at it, please watch and share this recent video featuring Tucker Carlson. He always nails it, including here where he asks, “Can the left lead a country they hate?” www.youtube.com/watch?v=64GgCVqRLzU

5 Replies to “Trump and Truth Versus Tyranny and Treason”