It seems a major problem with corona is it causes people to stop thinking:

If you were teaching a class on how to think, on basic logic, and how to avoid fallacious and reckless reasoning, one could simply use the corona crisis to find plenty of material to work with. When people live in fear and feed on the media-generated panic, their ability to think straight tends to take a real dive.

In numerous articles now I have had to deal with all sorts of fuzzy thinking and logical fallacies when it comes to discussing corona, and how governments have dealt with it. Soon an entire book will appear on the matter in which I have contributed a chapter. But one never ceases to be amazed at how folks are thinking – or not thinking – about these issues. 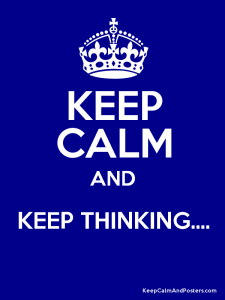 Consider one short comment that came into my site a little while ago: “Australia 583 deaths, USA 180,000. Lockdown policies might be a nuisance but they clearly save lives. I don’t understand your position, Bill. What alternative is there?”

I was intrigued at how much dodgy reasoning could fit into such a short comment. So let me here try to unpack all the faulty thinking and unhelpful reasoning found there. First of all, are we really surprised that the US has more corona deaths?

Um, guess what? The US has more people with sore feet, with heartburn, with impressive shoe collections, with smartphones, with bicycles, with manicured lawns, with pizza craving, and with a love of books. America has more of everything! And why might that be? Could it be because the US has a population of 330 million people, while Australia has only 25.5 million? Duh.

So yeah, we might expect a few more of everything to take place there. Throwing around meaningless numbers as this gal did tells us absolutely nothing. Indeed, each of the 50 US states manages corona differently – as do the various Australian states and territories. So it is quite foolish to compare country with country. At best you might try comparing state with state.

And if you do – even within a nation – you will find vast differences. I have often noted some of these differences between US states. For example, we know that some US states with harsher lockdown measures often have as many, if not more, Covid cases and deaths as those that don’t.

And the same is true here as well. Victoria is far and away the state with the most draconian lockdown measures in place, yet it leads the way with corona deaths. So it seems a good case can be made that lockdowns do NOT make us safer and result in fewer fatalities. Indeed, many experts have said that these excessive lockdowns are simply making matters worse. But that I have documented plenty of times now.

If this gal really wants to know what I think about all this, instead of just asking a rhetorical question, she is free to look over the many pieces I have already written about these matters. But why do I suspect she is not really interested in doing so? She seems to prefer to regurgitate the usual alarmist and panic-driven mantras, while ignoring the actual evidence.

In addition to the silly suggestion that radically different countries can somehow easily and reliably be compared – instead of contrasted – we also have the issue of faulty figures. I have often noted how various authorities have admitted to rather dubious numbers when it comes to corona cases and deaths.

From early on many have noted the rubbery figures and the dodgy numbers. I have been routinely pointing out these inconvenient truths. Especially in places like America, Covid deaths have been bundled together with other deaths. That is, those who died only because of Covid have often been lumped together with those who died from other causes of death. Sometimes a person was never even tested positive for it.

But even if we just have those dying FROM Covid included with those who die WITH Covid, the numbers will be greatly skewed. Consider this startling admission from the US CDC:

The Centers for Disease Control and Prevention has published a report stating that just 6% of COVID-19 deaths listed the only cause of death as coronavirus and no other comorbidities. “For 6% of the deaths, COVID-19 was the only cause mentioned. For deaths with conditions or causes in addition to COVID-19, on average, there were 2.6 additional conditions or causes per death,” the CDC website reads…. Based on the CDC’s data, 94% of people have died with coronavirus, along with one or more other underlying health issues. The CDC’s Aug. 28 update stated that there were 167,558 COVID-19 total deaths, which means 10,053 died solely of coronavirus alone with no other health conditions. www.theblaze.com/news/covid-deaths-percent-coronavirus-cdc

So we can forget the “180,000 deaths” my commentator was fretting over. And we have much the same in Australia. As Victorian Chief Health Officer Brett Sutton recently admitted: “For deaths from coronavirus, anyone who’s a confirmed case who dies is classified amongst coronavirus deaths. So, it doesn’t have to be definitively from coronavirus, and in some instances — you know, in aged care — there would have been some residents who were already receiving palliative care who became infected with coronavirus.” caldronpool.com/watch-victoria-says-coronavirus-death-toll-includes-people-who-did-not-die-from-the-virus/

And just today, when we heard of 41 deaths in Victoria, he also admitted that these included those who died many weeks ago – 33 to be exact! “These are deaths that have happened over previous weeks, including going back to late July.” www.abc.net.au/news/2020-08-31/coronavirus-australia-live-updates-blog-victoria-jobkeeper/12610938

The numbers are all over the place, and when even the “experts” start to admit how rubbery the figures are, then we all need to sit down, calm down, and not panic. Asking hard questions and thinking clearly is instead the way to proceed here.

As I have also said for a half a year now, all lives matter. Yet the corona alarmists don’t seem to give a rip about the many more fatalities due to the draconian lockdowns. Only one number seems to bother them: the corona deaths (or what is attributed to corona).

I and many others are concerned about all deaths, including the suicides and other deaths that have resulted from this. We know that the social pathologies are rising steadily, including depression, mental illness, gambling and drug addictions, alcoholism, and so on.

Consider another spike: the rise in domestic violence cases because of destroyed economies, lost livelihoods, and over-the-top internment camp measures. As one recent news report states:

Police are performing more than 900 checks on families at high risk of violence each week as COVID-19 creates a wave of first-time victims and perpetrators grappling with financial and employment stresses. Since the start of the pandemic, detectives and frontline officers working on Operation Ribbon say they’ve uncovered more than 5000 domestic violence offences including assaults and breaches of intervention orders.

Officers foreshadowed a rise in abuse during lockdown measures. Victoria Police data prepared for The Age shows 629 perpetrators of domestic abuse have been locked up since the beginning of April. A further 527 were charged and released to appear in court at a later date. Detective Senior Sergeant Rodney Maroney, who leads the southern metro region’s family violence unit based in Prahran, said COVID-19 was creating a pressure-cooker environment for a growing number of families.

The seasoned detective wants those experiencing heightened tensions in the home to know that if they leave home after the 8pm curfew to seek help or to cool off, they won’t be fined for breaching the restrictions. “What we’re starting to see is an increase in what we call COVID family violence, so it’s come about because of the lockdowns and it’s purely based around that financial stress, the unemployment, the uncertainty about where they are going in their futures,” he said. www.theage.com.au/national/victoria/lockdown-stresses-creating-first-time-family-violence-experts-say-20200826-p55pdr.html

And yet this person had the gall to say that all these extreme lockdown measures are merely a bit of a “nuisance”! Um, try telling that to all those who lost their jobs, who lost their businesses, who have mental health problems, who are experiencing domestic violence, who have not been able to see loved ones and family members for many months, and who have lost loved ones due to suicide. The heartlessness of some people utterly astounds me.

Speaking of the Age – and the SMH – newspapers: although normally left-leaning, of late they have come out making some sensible and strong critiques of those who have utterly mismanaged all this. One opinion piece found in those papers said in part:

Millions of other citizens are expected to accept loss of income, loss of personal liberties, loss of wellbeing. And just about everyone is held to account. Those who don’t are admonished, fined and, in the case of the woman who snuck across the border into Western Australia by hiding on a truck, jailed for six months. Just about everyone, that is, except those at the very top….

Everyone is sorry. No one is responsible. Ministers preside over catastrophic failure, illness and mass death. And keep their jobs. And their powers. And their privileges. It doesn’t matter how glaring the failures of their departments, how many people die as a result. The dead go to their graves. The ministers go back to their jobs.

These are not the typical micro scandals of Australian politics – rorted expenses, sex with the staff, lying to parliament. All serious but they do not kill the citizenry that governments exist to serve. These have been mostly avoidable deaths. Of dozens, of hundreds of Australians. People with the same rights as members of parliament. www.smh.com.au/politics/federal/everyone-is-sorry-no-one-is-responsible-covid-exposes-lack-of-ministerial-accountability-20200828-p55qdt.html

Here in Victoria our bungling and incompetent Premier who is responsible for our second wave wants to extend his powers indefinitely. He wants to be a dictator for life. I have written about how dangerous and serious this is: billmuehlenberg.com/2020/08/25/smashing-democracy-in-victoria/

It appears that tomorrow the Victorian parliament will discuss and vote on his move to push emergency powers for as long as he wants them. We especially need to keep targeting the crossbenchers on this. Labor is in favour, the Libs are against. So the votes of the others will determine which way this diabolical bill goes.

Here are the 12 crossbenchers that need to be contacted – please do!

And don’t forget to contact the Premier and tell him what you think of this:

13 Replies to “How Not To Think About Governments and Emergencies”