There is a place for weeding out fake friends:

If you are into American cooking shows you will be familiar with my title. But no, I am not here going to talk about food or cooking contests. I am however going to share some advice that might be of some use to you. And that comes as a result of someone sharing some things with me that I found to be useful.

One godly woman that I know and respect got in touch with me recently. She shared with me a word she felt she was strongly and repeatedly getting from the Lord for me. So after some prayer and deliberation she told it to me. She had a strong sense that I should be weeding out some of my “friends” on the social media. 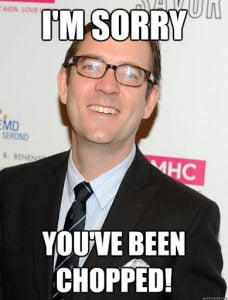 A passage of Scripture that kept coming to her as she prayed about all this was Judges 7. It of course speaks about how God had told Gideon to weed out from his army a large number of men that the Lord did not want involved. So he went from the original 32,000 men down to 10,000, and then finally down to 300. That was quite a weeding out process!

This gal said she felt that in a similar sort of fashion I don’t need the masses but a smaller, committed core of folks who will stand with me in the battles we face. While we of course must submit all such things to the Lord and pray them through, I did thank her for thinking of me and sharing what she did.

And I think she was right. It is true that I have far too many social media contacts – many of whom are not at all real friends and/or fully onside. Many of them ask to be my friend, and after I try to check them out first, and then let them on, I never hear from them again – until they come to my page to complain about something, criticise me, or pick a fight.

So many seem to get their cheap thrills out of arguing and attacking me. All they really seem to want to do is derail me from doing what God wants me to do. Of course I am happy to deal with those who may well differ with me on various things, but only if they are still open, humble and teachable – and who are really one in Christ with me.

But not everyone is. Indeed, I have learned over the years that there are all sorts of folks who claim to be Christians who clearly are not. They are fake Christians who try to do real damage to God’s people and the work they are seeking to do for the Lord.

We need spiritual discernment here. We also need to realise that we really are in a spiritual war, and we need our spiritual weaponry at all times. Satan IS alive and well on planet earth, and he will use fake Christians as much as non-Christians to discourage you, to deflate you, and to derail you from your mission.

There is a meme making the rounds on the social media that I have shared a few times. It shows a group of lions and has the words: “Surround yourself with those on the same mission as you.” Sure, if you are using the social media merely to exchange recipes for split pea soup and the like, it does not matter too much who your friends are.

But if you are using the social media to do the work of the Lord, to share truth, and to stand up for what is right, then yes indeed, it DOES matter greatly who are your friends. If you have mostly critics and trolls and those opposed to what you are doing, it will be a real tough journey indeed.

You need to consider getting rid of some of these folks. And if you do start weeding out some folks, you can be sure that Satan will try to get at you, saying you are being unfriendly or unloving or ungracious. He will even whisper in your ear that you should keep them all in the hopes of ‘reaching’ them.

But we are under no Christian obligation to hang onto those who clearly are not interested in being reached, but simply seem to exist to argue, to be difficult, and to waste your time. And after a while one begins to discern just who is teachable and reachable and who is not.

It is one thing to listen to and take on board criticism from those who care about you and love you. It is another thing to allow fleshly armchair critics to wear you down and bum you out. Again, discernment is needed. It is not just Jake and Elwood Blues who understand that “we’re on a mission for God.” The work we do on the social media – and elsewhere – should always be about serving God and making him known.

And if that is our mission, we can fully expect to be attacked and opposed and abused and mistreated. So the idea of weeding out those who clearly are trolls and carnal Christians is quite important. Again, we must pray and ask God who might be open to the truth, who are more or less teachable, and who have a humble spirit.

Usually those sorts of folks are worth hanging on to in the hopes of leading them to God and biblical truth. But also make sure that you have a lot of strong, caring and supportive friends. These battles are too hard to fight alone. We need backup in these battles, and we need reinforcements when the going gets tough.

As always, we must be prayerful and careful here. I am not saying we should dump everyone who slightly disagrees with us on some matters – especially secondary matters. We WILL need to develop a thick skin to some extent so that we are not personally offended every time the critics come along.

My rule of thumb here is the old “three strikes and you’re out” rule. If I politely warn someone to ease up, or leave a certain topic alone, and they keep coming back and ignore my requests, and just keep arguing and being trollish, after the third time I just let them go. It is clear they are not interested in showing me any Christian grace and respect.

Lest anyone think this is being all rather unchristian, just remember some of the words Jesus gave to his disciples. He too warned them about the need to be selective here. As we read in Matthew 7:6, “Do not give dogs what is holy, and do not throw your pearls before pigs, lest they trample them underfoot and turn to attack you.” And consider Matthew 10:11-15:

And whatever town or village you enter, find out who is worthy in it and stay there until you depart. As you enter the house, greet it. And if the house is worthy, let your peace come upon it, but if it is not worthy, let your peace return to you. And if anyone will not receive you or listen to your words, shake off the dust from your feet when you leave that house or town. Truly, I say to you, it will be more bearable on the day of judgment for the land of Sodom and Gomorrah than for that town.

The relevance of such passages here should be evident. So I do appreciate the word that this gal shared with me. It resonates with me because I have been thinking similar things of late anyway. I have thus put it into practice already. Just now for example I unfriended a rabid Dan Andrews Zombie who was defending this guy to the death. I felt pretty good about letting her go! She really is not my friend and we have zippo in common.

The moral of the story is this: if you use things like the social media as a means to share truth, stand for God, and promote some sanity and light in an insane and dark world, you will be attacked. That goes with the territory. But you have no need to hang on to every ‘friend’ you have, especially if it seems they are only there to wear you out, constantly challenge you, discourage you, and bring you down.

Of course one need not use the actual percentage that Gideon did in his weeding – around 99%. If I did that, I would be down to around 40 friends! But I realise that only a small portion of all these friends really are committed to me and my mission. Plus Facebook only allows a tiny fraction of your friends to see your stuff anyway.

But the idea of sifting, of weeding out, is a good one. So I thank my friend for sharing her thoughts with me, and it is hoped that sharing these thoughts with you might be of some help as well.

13 Replies to “You’ve Been Chopped”