Some personal and devotional reflections on fathers and sons:

OK, this will be something of a spiritual mixed salad, with various bits thrown in together: the closing verses of the Old Testament coupled with a New Testament parable, tied together by a distant childhood memory. Yes I know, my mind works in mysterious ways, but that is how it is.

When various things come together in an interesting manner and at the same time, it could all just be coincidence. Or it could be God. I tend to suspect the latter, not just here, but often what I find happening in my life. So let me bring these bits and pieces together, and see if God has a message for us in the process. 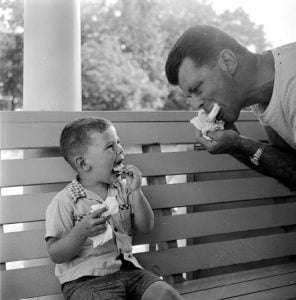 I was thinking last night. No surprises there. Never having been the kind of person who can drop off to sleep easily, I normally toss and turn for ages, while the mind is going a million miles an hour. For some reason I do not have many childhood memories, but last night one episode did come to mind.

It would have happened a long time ago. In fact, with a quick internet search, I can pinpoint the year: 1960. That is when a Hollywood film came out, and presumably that is when I saw it at the local cinema. I would have been all of seven years old at the time.

What I recollected last night was this: when I was just a young guy, my older brother and I went to the movies one afternoon – in the heart of winter. The theatre was only 3-4 blocks up the street. We were going to see Swiss Family Robinson which presumably had just come into the cinemas then as part of a national release.

If you are an old guy like me, you might recall having seen the film. It is discussed here: en.wikipedia.org/wiki/Swiss_Family_Robinson_(1960_film)

Anyway, back to my story. When the two of us got to the movie theatre, some of my brother’s friends were there. They went in together, and they either made it clear that I was not welcome to stay with them, or I decided not to hang around with them.

Either way, I went up to the front of the theatre and watched the film all by myself. I must have really enjoyed it, and been quite captivated by it, because after it finished, and with a brief intermission, it started up again. So I stayed and watched it a second time!

I am not sure how long I stayed – almost to the end of the movie I think. The bit about the family fighting off the pirates must have especially intrigued me. But for some reason I then turned around and was shocked at what I found: the cinema was nearly empty. Oops! I decided I had better get out of there fast and head home.

As I was walking home alone in the dark – with snow falling I think – I saw my dad and brother coming toward me. I became worried, thinking I was in big trouble. But as we met up, it was clear my dad was upset with my older brother for having abandoned me and lost me.

So it was a bit of a relief to know that he was in trouble, not me. Hmm, that happened 60 years ago, and for some reason it popped into my mind last night. As is often the case, I tried to ponder as to whether any spiritual significance or lessons could be gleaned from this.

I did think of the parable Jesus told of the Prodigal Son (Luke 15:11–32). While the older brother may not have been all that keen about the son’s return, the father certainly was. My earthly dad was quite relieved to find me coming home that day, and around 11 years later my heavenly Father was overjoyed to see me come home to his heavenly household.

Of course I have looked at this biblical story at various times already, including this Christmas reflection on it: billmuehlenberg.com/2015/12/22/20482/

But another passage ties in here – one that I just read this morning. It involves the final two verses of the Old Testament. Malachi 4:5-6 says this: “Behold, I will send you Elijah the prophet before the great and awesome day of the Lord comes. And he will turn the hearts of fathers to their children and the hearts of children to their fathers, lest I come and strike the land with a decree of utter destruction.”

That is a rather amazing text. There is no question that today one of the most pressing social problems found in the West is that of fatherlessness. It is a massive problem causing so much hurt, harm and devastation. Children growing up without their dads are well and truly behind the eight ball.

This is one of the clearest lessons we learn from the social science research. I highlight just a sampling of this mountain of evidence on the overwhelming importance of fathers in this two-part article:

And in an earlier piece I tied in the social science data with the passage from Malachi: billmuehlenberg.com/2001/08/09/the-importance-of-fathers/

One final element can be tossed into this spiritual fruit salad. With Wuhan Dan’s draconian lockdown measures and curfews in place, Melbournians are extremely limited in where they can go and what they can do. So for my daily walks (thank you Comrade Dan for allowing us an hour or two a day to walk – so very generous of you), I just go up and down the streets around my house.

When I do this, another memory hits me: I recall when my dad paid us a visit some years ago. Before he died, he came to see us for two weeks. He too liked walking up and down these same streets. He would have looked at the houses and what condition they were in: he was a house painter so he noticed things like that.

I too painted houses for a while, and I too notice those things. So when I do my daily walk, checking out the neighbouring houses, I often think about my dad. Sadly, when he was here, I think I was away at work for a good part of the time.

Now I think I should have more fully treasured that time we had together. I should have been with him every moment of those 14 or so days that he was here. Now it is all over, never to happen again, until we reunite in the next life. And two of my sons are outside of the ludicrous and senseless 5km limit our Glorious Dictator has imposed on us all. So some of my boys I have not seen for many months now.

All the more reason for us to treasure each other when we have the chance. Death comes along too often – as do power-hungry dictators. You never know when you will lose the opportunity to be with the ones you love. So let us pray fervently that God does indeed “turn the hearts of fathers to their children and the hearts of children to their fathers”.

10 Replies to “Fathers and Sons”