This is about the third rewrite of this article, and it will likely need to be rewritten or revised several more times. About all we know for sure at this point in time concerning the US elections is a lot of legal challenges and lawsuits will be initiated by both Republicans and Democrats, with various voter recounts along the way.

What we don’t know: the White House 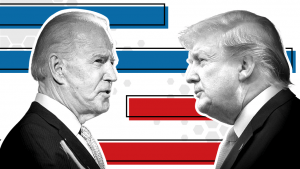 We know that dangers of voter fraud and irregularities are always possible, especially on the Democrat side of politics, and enough problems have already seemingly emerged that such challenges and recounts may well be necessary. So it could be days, and even weeks, before we finally learn who is America’s next president.

I have not been alone in fluctuating opinions on the results. While I did pop a cheap bottle of bubbly last night when it seemed clear that Trump had won, plenty of other commentators felt the same way. Indeed, it has been a roller coaster all along.

Most folks had predicted a blue wave with a big Biden win. Then by last night (Australia time) it seemed clear that this was just not happening. But by the early hours of this morning things radically shifted again, with seemingly safe states for Trump (eg., Wisconsin, Michigan) doing a last-minute flip for Biden.

It was especially these late, radical shifts in the vote that have many – especially Trump and the Republicans – quite concerned about real irregularities and possible fraud. While we cannot be certain of various charges already being levelled, some have claimed that Wisconsin appears to have 100,000 more votes counted than those who are actually registered voters!

And many problems with mail-in votes seem to need to be closely looked at. Some states like Pennsylvania are allowing them to still come in through to Friday, with no clear postal marks as to when they were actually sent. Thus people could be voting after the polls have closed.

The lie of the land is this: Trump needs to win the three remaining undecided eastern states: Pennsylvania, North Carolina and Georgia, and one of the two still iffy Western states, either Nevada or Arizona. If he were to pull this off, we can be sure of Democrat court challenges. If Trump fails in this, we can be sure of Republican court challenges.

It is because of all this political drama that things are now really up in the air, and we do not know how long it will be before any certainty emerges as to who actually wins the White House. Those wanting a quick answer to all this are doomed to be disappointed.

What we do know: pollsters and Congress

The first thing we do know is this: Once again the mainstream media, the experts and the pollsters got it wrong – big time. Just like the corona “experts,” these guys need to find a new day job. They were all saying Biden would win by eight or nine points, which would have been around nine or ten million votes. This did not happen.

They certainly got Florida wrong. Trump won more non-white votes there than he did four years ago. Leftists kept playing the race card on Trump, but he did very well with non-Whites there and elsewhere. These pollsters really do need to give it a rest.

Sure, the silent voter phenomenon was a part of this. Many Republicans feared to tell pollsters and the media their true voting intentions. With the left so willing to hate on and attack those who differed, they had every reason to keep their voting intentions hidden. But the well-paid pollsters should have been able to take all that into account.

Another thing we know is that this was a huge voter turnout. Around 67% of the eligible electorate voted – even in the midst of a pandemic – maybe 160 million voters all up. That is the largest turnout thus far. Trump for example won more votes than he did last time (68 million compared to 63 million).

As to Congress, all 435 seats in the US House of Representatives were up for grabs yesterday with a majority of 218 seats needed to take control. In the Senate 33 out of the 100 seats were determined. Also, 11 of the 50 US states were up for grabs in the gubernatorial races. And various ballot measures were also decided. The results so far seem to be these:

-In the House of Reps 17 seats were needed by the Republicans to take back the majority. The Republicans picked up some extra seats – at least seven – but the Democrats still have a slight majority.

-The Dems needed to win four new seats to win back the Senate. They seem to have gotten just one.

-In the governor races, eight of the eleven states are red, a gain of one for the Republicans.

A few other things we know pretty clearly. Some US states are still counting, and doing it very slowly. Things remain to be sorted out, and along with court challenges, it may be even weeks to come before clear results emerge – much like Florida in 2000. Today however Florida is a model of counting efficiency. Some of these other states need to learn from it.

One last thing which is becoming rather clear: the Democrats used to claim to be for the small guy, the worker, etc. Republicans were said to be for the rich and big business. In many ways this is turning around. Workers who heard the socialist rhetoric of Biden and Harris, who feared their coal and oil jobs, etc, turned against the Dems.

And one bit of good news, as this headline indicates: “Number of Pro-Life Women in the House of Representatives DOUBLES in Blow to Pelosi”. pjmedia.com/election/tyler-o-neil/2020/11/04/number-of-pro-life-women-in-the-house-of-representatives-doubles-in-blow-to-pelosi-n1125552

If this in the end does become a Trump win, it will have been nothing short of miraculous. With almost all of the mainstream media fully opposed to him, and most of the tech giants, he was up against it. It will be even a better win than last time.

When Trump won in 2016 I finished my article on that victory with these words:

In sum, it is fantastic that Hillary did not win. Whether Trump will prove to be an effective, principled and wise leader however remains to be seen. But in the meantime, we do have this as a very real plus: all these lefty celebs, Hollyweird types and lefty politicians who promised to leave the country if Trump wins. I trust you are now packing your bags Lena Dunham, Al Sharpton, Miley Cyrus, Whoopi Goldberg, Cher, Barbara Streisand, and Amy Schumer, among others.

Having just reread about the death and resurrection of Jesus today, I am reminded of a crucial election held 2000 years ago. The crowds overwhelmingly went with Barabbas and rejected Jesus. But Jesus is the one who rose from the dead and is victorious forevermore.

Politics cannot save us. No human can make a nation great again – only God can. Paul Washer was quite right to remind us that “The judgment of God against this nation will not be turned by a more conservative President, but by the repentance of its people”. Or as Michael Brown recently put it:

“The bottom line is that the solution to our many problems will not be found in the White House and we must turn the passion and focus and attention we have put on the elections back to where it belongs: on the Lord and on our responsibilities as God’s people. After all, Jesus never said that the president or the Congress or the Supreme Court were the salt of the earth or the light of the world. Instead, He said that to us, His followers (Matthew 5:13-16), and if there is to be a positive, nationwide, moral and cultural revolution in America, it must begin with us.” billmuehlenberg.com/2016/11/09/trump-wins/

Those last words are still true today. Elections will sometimes go our way, and sometimes they will go against us. But the God we serve is eternally the same, and will never disappoint or let us down. So whether we celebrate a big victory, or grieve over a crushing loss, we still must realise as Christians that politics is not everything, and there is a greater King that we all will bow down to.

Postscript – on the Electoral College

The left usually complains about the electoral college – especially when they lose – claiming it is unfair, archaic, and corrupt. But there are very good reasons for why it is there. See this piece for more on it: billmuehlenberg.com/2019/03/22/on-the-american-electoral-college-and-why-we-should-not-abolish-it/

As I say in that article:

The Electoral College consists of 538 electors, so a majority of 270 electoral votes is needed to elect the President. Each state’s entitled allotment of electors equals the number of members in its Congressional delegation: one for each member in the House of Representatives plus two for its Senators. All this was done to ensure that states with smaller populations would not be ignored or swamped by areas with large populations. America was never thought to be just a pure democracy. It was always conceived of as a republic. The Founding Fathers were quite clear on this.