As with all controversial moral issues there is plenty of spin, hype, misrepresentation and euphemisms being utilised. That is especially so with those seeking to make excuses for great evil: they must resort to subterfuge, deception and cover-ups to conceal vital truths. 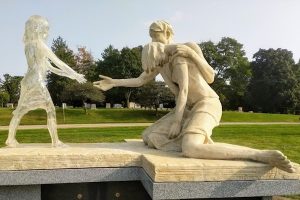 George Orwell spoke to this fact: “In our time, political speech and writing are largely the defence of the indefensible. . . . Thus political language has to consist largely of euphemism, question-begging and sheer cloudy vagueness. . . . Political language … is designed to make lies sound truthful and murder respectable, and to give an appearance of solidity to pure wind.”

The promotion of abortion is of course a classic example of this. Calling the killing of an unborn child a ‘woman’s right to choose’; describing the victim as merely a ‘clump of cells’; and referring to the dead baby as the ‘termination of a pregnancy’ is how the pro-death crowd obfuscates and distorts the reality of abortion.

So those who are pro-life need to keep reminding people what abortion is really all about. We need to keep letting others know that the endgame of all abortion is a dead child. The reality is, two people enter an abortion mill, but only – normally – one comes out alive.

There are all sorts of ways we can demonstrate this to those who have been brainwashed into thinking otherwise. Consider one terrific means that some creative pro-lifers have run with: offering free ultrasounds to pregnant women outside of abortion clinics. See more on this here: billmuehlenberg.com/2012/03/09/winning-the-abortion-wars/

There is no end to such creative means to stand for life. Artists can also be included here. Indeed, eight years ago I mentioned one European artist who has made a big impact. billmuehlenberg.com/2012/07/14/getting-gods-heart-on-abortion/

In that article I said this: “Jeanne Smits reports that a group of young mothers in Slovakia commissioned a statue dedicated to the unborn. According to her blogpost, it was inaugurated in the presence of the Slovak minister of health. It is called ‘The Child Who was Never Born.’ It was created by a young sculptor named Martin Hudáeka.”

Well it seems this pro-life artist is still at it, with his latest work installed in Madison, Wisconsin of all places. As someone who used to be a student there long ago, Madison has long been known as a hotspot of leftism and radicalism. The capital of Wisconsin is also the woke capital, and when I first heard about this, I wondered how long before the sculpture gets pulled down by the mob.

One report of his latest artwork says this:

The sculpture just installed at Resurrection Cemetery in the Diocese of Madison expresses the profound emotional impact of the many losses of those children killed by abortion. There is the mother, slumped down in almost inconsolable grief. The lost child, appearing as a 4-year-old girl, reaches out. Perhaps the biggest impact is found in the figure of the father, so often left out of discussions about abortion. The abject horror shown on his face at seeing the daughter who was never born has the power to take one’s breath away.

“The donors of this statue were really moved by it because it had the man there as well,” said Damian Lenshek, director of cemeteries for the Diocese of Madison. “For anybody who’s attracted to the statue and the meaning of the statue, this is going to be a meaningful place for them.” The donors wished to remain anonymous, he said.

Created by internationally known Slovakian sculptor Martin Hudáeka, “The Memorial of Unborn Children II” tells many stories through its three characters. It is the follow-up to an earlier Hudáeka work that received widespread acclaim—a statue of a grieving mother with her unborn child reaching out in mercy and forgiveness. The new sculpture adds the father into the abortion story, a detail being hailed by pro-life advocates.

“I like the connection between the pro-life movement and the cemetery. I think cemeteries are very pro life,” said Lenshek, who oversaw installation of the statue and the granite cremation columbarium on which it rests. “We picked this spot because it’s along Speedway (Road). We wanted people to be able to see it as they drove by. We also wanted it to be a place where people could come to pray and meditate.”

In recent weeks, a crane was brought in to set the 10,000 pounds of black granite for the columbarium, which will hold the cremated remains of the faithful in small compartments called niches. The crane then set the life-size sculpture of the family that never was. A brick terrace was installed around the foundation. Extensive landscaping is planned, along with two granite benches for visitors. Memorial bricks will be sold for anyone wanting to memorialize a loved one.

“The Memorial of Unborn Children II” is an outgrowth of the original concept, created for a burial site in Wroclaw, Poland. “People from Poland came to me and we discussed the options to show that miscarried children and aborted children are not missed only by their mothers, but by the fathers, too,” Hudáeka told Catholic World Report. “The statue shows that abortion affects all of society. We should help both mother and father. The story must be told that both are hurt by the loss of their child.”

The entire project took about three years, Hudáeka said, including one year to create the final sculpture design. After the initial statue was dedicated in Poland, he created life-size replicas now on display in Svidnik, Slovakia, and the new one at Resurrection Cemetery in Madison. www.catholicworldreport.com/2020/10/28/the-memorial-of-unborn-children-ii-portrays-regret-mercy-healing-in-powerful-way/

The article goes on to note what other pro-life leaders are saying about this work. Let me feature one of them here:

“Men are programmed by God to provide and protect their offspring. This is one of the reasons why men are affected,” Mattes said. “I see the man in the statue reaching out to his aborted daughter in a futile attempt to protect her.” Mattes said he is glad to see “this memorial to the unborn includes the grief and shame of both the mother and the father, often the silent victim of abortion.”

As mentioned, there are many ways we can share the pro-life message with others. Artists using their skills and talents to convey the message is just one of many ways. Perhaps you have various artistic abilities and are wondering how you can take a stand for life. Let the work of Hudáeka encourage and inspire you.

And there are countless other ways we can be a voice for the voiceless. The main thing is that we care, and that we are willing to speak out in any and all possible ways. Let me close with another artist, Bruce Dawe. The Australian poet, who just passed away in April of this year, penned this powerful and inspirational poem in 1986:

I never walked abroad in air
I never saw the sky
Nor knew the sovereign touch of care
Nor looked into an eye.

I never chose, nor gave consent
Nor voted on my fate
Unseen, I came, unseen I went
Too early and too late

Oh you within whose God-like power
Lies to so decide
Remember me when, some late hour
Talks turn to genocide

Remember me next time you
Rejoice at sun or star
I would have loved to see them too
I never got that far.

7 Replies to “Creative Clarity on Abortion”