We all need to pray for and emulate prolife campaigner Mary Wagner.

Yesterday I penned a piece with the title, “Do You Ever Feel Like Giving Up?” I mentioned there that at times I can despair, and I encouraged folks to keep going, because of what Christ did for us. In it I was going to give some examples of those who persevered and kept on going, despite all the adversity, hardship and opposition: billmuehlenberg.com/2019/09/12/do-you-ever-feel-like-giving-up/ 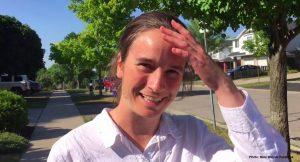 I ended up only offering the example of our Lord who went all the way to Calvary on our behalf. And that example is certainly enough. But other champions can be mentioned. There would be so many in 2000 years of church history. Countless saints of God could be highlighted who are terrific role models when it comes to perseverance, total commitment, and dogged determination to stay the course.

One such woman I have written about before. And she keeps deserving more write-ups, because she keeps on paying the price for her Christian convictions – in this case, standing up for those who cannot stand up for themselves. I refer to Canadian prolife champion Mary Wagner.

Over the past seven years she has spent many months in jail following numerous arrests, all because of her determination to stand up for the unborn by means of peaceful protests. In one of my articles about her I mentioned how she was serving time over Christmas while the rest of us were free to enjoy the holiday:

She has been in jail again over the past five months, and is just now being released. One write-up tells the story as follows:

Famed Canadian human rights defender Mary Wagner was convicted of trespassing and interference with the operation of a business, following months in jail after she entered a Vancouver abortion facility to inform expectant mothers about alternatives to abortion.

In a statement on Facebook, Wagner said, “This conviction is nothing I am ashamed of. On the contrary, I am pleased that the court has found there is enough evidence to conclude that I interfered with the business of destroying helpless unborn children, who remain unprotected and abandoned by the courts.” According to the Facebook account, Wagner is to be released today but remains in custody of the court.

In a telephone conversation with LifeSiteNews, defense attorney Peter Boushy said the Vancouver court found Wagner guilty on charges of mischief under section 430 of the Criminal Code but sentenced her to time served in jail. She had been in jail since her arrest on April 17. According to Boushy, she served 148 days in prison. Canadian law credits each day served in jail pre-trial at the rate of 1.5 to one, which means that Wagner has already served more than the maximum sentence allowable for the offense attributed to her. While the Crown asked for three years of probation, the court allowed only two years.

During the sentencing, Judge Mark Jette said to Wagner directly, “I appreciate that you come from a strong and good family and that you are a good person,” said Boushy. While the Crown had asked for 30 days of community service as part of the sentence, the judge said, “I’m satisfied that you give back to the community on a daily basis. It’s in your DNA.” Boushy said that he had never heard such a compliment from the bench before. He noted that the judge referred to Wagner as a “warrior” during his remarks. Wagner will not have to render community service as part of the sentence.

Boushy said cases such as Wagner’s “bring into sharp focus Christian witnessing.” He noted that her supporters are a handful of Christian women, whom he described as “gentle, humble, graceful, loving and truthful.” They exhibit the same characteristics as the female followers of Jesus Christ who were with Him on the road to Calvary, he said. “At the end of the day, a true Christian is imbued with the Holy Spirit and can actually ‘see’ the horrors of abortions.” In apparent reference to the Gospel of St. Mark, Boushy said Jesus used parables because his listeners could not otherwise “see” what He was talking about. “That whole idea is brought into focus in these cases,” Boushy said and noted that Wagner’s supporters are joyful. “Thank God for them,” he said. www.lifesitenews.com/news/canadian-pro-life-champion-mary-wagner-convicted-of-mischief-for-defending-babies

What a champion. While millions of Christians say they are prolife, how many of them really have the courage of their convictions to do all they can to protect human life in the womb? How many are prepared to spend month after month in jail so that others might live?

Of course in Australia we have our own incredible heroes such as Graham Preston and Kathy Clubb. I have also written about these champions at various times, eg: billmuehlenberg.com/2016/08/04/ordinary-people-become-extraordinary-warriors/

There are a number of these fantastic champions who are often ignored by the secular press and often overlooked by Christians as well. But they are the real deal heroes of our time. They are willing to pay the price to stand for unborn babies.

Just this morning I reread the story of some biblical champions, who also were willing to face the music rather than let down their Lord. In the book of Daniel we read about four brave Hebrew young men who are being held as captives in Babylon, yet who made a huge difference in this ungodly environment.

In chapter 3 we read about King Nebuchadnezzar building a large statue of himself that everyone is supposed to bow down before, worshipping the golden image of the king. But Daniel’s three friends Shadrach, Meshach and Abednego refuse to do so, choosing instead to only worship the One True God.

This enrages the King and he says that they must be thrown into a blazing furnace for their disobedience and recalcitrance. Many of you will be familiar with how the three Hebrews responded to the King. As we read in verses 16-18:

King Nebuchadnezzar, we do not need to defend ourselves before you in this matter. If we are thrown into the blazing furnace, the God we serve is able to deliver us from it, and he will deliver us from Your Majesty’s hand. But even if he does not, we want you to know, Your Majesty, that we will not serve your gods or worship the image of gold you have set up.

Wow, what a testimony. How can we not see Mary Wagner and what she keeps doing as a very real parallel here? She tells the secular judges and rulers in Canada that she will not bow down to the false gods of “choice” and career and convenience.

Whether or not she will be spared yet more jail time, she continues to refuse to bow down before these unjust laws, and she refuses to remain quiet about one of the greatest acts of immorality of our time. The killing fields continue apace since so few people – including so few believers – care at all about what is happening.

And recall that she could be living the good life now. She graduated from the University of British Columbia, majoring in English and French Literature. Had she so chosen, she could have a nice cushy job right now teaching what she loved to study.

But she has given all that up to stand for something so much more important. What about you? What are you doing for Christ and the Kingdom? Have you ever made any sacrifices to be salt and light in a decaying society? Have you ever taken risks for your faith, and for the unborn?

Mary Wagner loves the unborn passionately. She also hates the evil of abortion. In this she is being one hundred per cent biblical. As we read in Romans 12:9, we are to “hate what is evil; cling to what is good.” That is just what she is doing.

At this point it is possible that some folks might say, ‘Well, she is a devout Catholic, so that is why she does what she does.’ Well, I am a devout Protestant, and I of course fully endorse her and her actions. Indeed, any person on the planet who names the name of Jesus Christ should be passionately prolife.

Commenting on this very passage in Romans, R. C. Sproul, a devout Protestant, said this:

I believe that the greatest ethical issue today is that of abortion. In recent years many have come to see terrorism as more concerning than abortion. I am baffled by that, because more people were killed on September 10 in the womb of U.S. women than were killed on 9/11 in New York City. More babies were slaughtered on September 12 than adults were killed on 9/11. If we had a camera on the womb so that CNN could show us graphic videos of what actually happens in the slaughter of unborn children, abortion would be quickly abolished, but the reality of it is covered up. If there is one thing I know about God, it is that he hates abortion. The German ethicist Helmut Thielicke indicated something unusual in his massive mid-twentieth-century work on Christian ethics. The work appeared before Roe v. Wade; that is, before Western civilization had embraced abortion on demand. In his book Thielicke wrote that abortion has always been considered a monolithic evil in Christian thought among both liberals and conservatives. That is clear from the very first century, in the Didache, which called abortion ‘murder.’ Abortion is an unspeakable evil that God abhors, one that the American church tolerates and winks at. That troubles me deeply, and I do not understand it. As we are to despise what is evil, we are to cling to what is good.

It is not just the church as a whole, but far too many individual Christians who tolerate and wink at abortion. We need many more Mary Wagners. Will you be one of them?

18 Replies to “Never Give Up – Standing For the Unborn”