Christians need to think clearly and biblically about how they approach politics:

Christians can have many different approaches to the matter of political involvement. Many of the differences believers have when it comes to politics and their role in it involve differing understandings, and there is often legitimate room to move on these issues. But it seems that some approaches Christians take are simply wrong – they are extremes to avoid. 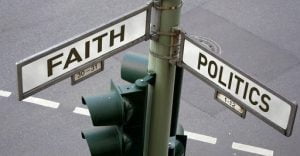 That is what I want to address here. Although this piece is somewhat generic in nature, it also has particular reference to the current ongoing war over the US election results. It has to do – once again – with how Christians should think about things like political involvement and public debate on social and political matters.

Here I want to examine a number of unhelpful and unbiblical extremes that Christians can – and so often do – take on these issues. There would be other poor stances one can take, but these five are fairly common. And plenty of examples of each can easily be found.

It is therefore worth looking at some of these faulty responses once again. With much already written on these matters, in each of my five points I will offer a link to an earlier article of mine where things have been discussed in greater detail. Here then are five unhelpful responses:

Too many believers avoid politics like the plague. They want nothing to do with politics and political involvement, and actually take pride in their stance. Some of these Christians even think that they are somehow being more ‘spiritual’ and ‘Christlike’ by totally avoiding politics.

But this is clearly not the case. One must know at least a modicum about politics since it does impact all of us, and the churches as well. We cannot obey the command of Christ to be salt and light, we cannot see the lordship of Christ extended to all areas of life, and we cannot be a complete witness to biblical truth if we keep our heads in the sand and refuse to even think about politics.

Too many issues of concern to all believers have political aspects. For example, our religious liberties – including the freedom to preach the gospel – are in part dependent upon political decisions and outcomes. Our ability to stand up for the sanctity of life has very real political implications. And the ability to withstand the constant war on marriage and family of course involves what takes place in the political and legal arenas. See more on this here: billmuehlenberg.com/2011/12/06/christianity-and-political-involvement/

At the opposite end of the spectrum to what I just said in my first point is this position. A Christian can be overly obsessed with politics and easily turn it into an idol. While I may be a bit of a political junkie – because I believe politics does matter and it matters to our faith – I am not foolish enough to argue that political answers are in any way decisive, final answers – to anything.

When believers see everything as political, seek to politicise everything, and look to politics as a sort of saviour, they can easily become guilty of idolatry. Instead of looking to Christ as the final answer to everything, they believe that politics is the main game in town.

We need to maintain the biblical balance here. Ignoring politics is not the way forward, but neither is deifying politics. The truth lies somewhere in the middle. I like the title of a 1986 book by Dutch theologian H. M. Kuitert: Everything Is Politics, But Politics Is Not Everything. That basically gets the mix right.

One older article looking at some aspects of the politicising of things is found here: billmuehlenberg.com/2018/06/11/the-sexual-politicisation-of-everything/

3. Avoid speaking about politics in order to ‘keep the peace’

So many Christians who perhaps do think and read about politics nonetheless will never speak out on important political matters for fear of upsetting people, offending folks, or being too divisive. Their main priority is to keep all family members and friends onside and keep all relationships intact. And if that means remaining silent on anything to do with politics, then so be it.

Now generally speaking we SHOULD seek to keep our relationships in good working order, and we should seek to avoid that which will unnecessarily cause disruptions in our social circles and break fellowship with other believers. But this is not an absolute.

Jesus himself warned his would-be followers that unless they were willing to put him above everything and everyone else – including family members – they were not worthy to be his disciples. And seeking for unity at the expense of truth is not an option for the biblical Christian either. I spoke to that recently here: billmuehlenberg.com/2020/11/08/political-differences-and-christian-unity/

Keeping silent in the interests of ‘keeping the peace’ is of limited value. Yes, there is a time to speak and a time to stay silent, but refusing to speak up when it really matters may more be a form of cowardice than of peacekeeping. There are times when our silence makes us guilty of complicity with great evil.

4. Rely on the mainstream media for your political knowledge and understanding

Believe it or not, the first port of call for the concerned Christian in regard to politics is the Bible. That book provides at the very least the basic principles, and lays the groundwork, for how we should think politically. But too many believers who do read about politics overwhelmingly rely on a totally partisan and one-sided mainstream media. If and when they do, they will be utterly clueless as to the truth of what is actually happening in the political sphere – and elsewhere.

Just the other day I had a discussion with a fellow about the US elections. He was quite surprised and shocked to learn that Biden is NOT in fact the president-elect, and that the final decision on the officially declared winner for POTUS will not be until at least next month.

I told him that various recounts were underway, along with a number of court challenges, and that we just do not know who will win as yet. I mentioned the 2000 election and the 37 days that transpired before a winner was declared back then. I said the mainstream media is simply pushing the ‘Biden has won’ narrative. He kept saying, ‘Oh, I had no idea.’

I felt like telling him more truth on this, namely that if he relies solely on our ABC or the Age (or CNN and the NYT if he were in the US) for his info, he will be woefully misinformed – indeed deceived – about this and so many other things that are happening in the world.

Related to my fourth point is this. Too many believers just accept everything they hear or read; they ask no hard questions and they simply run with the left’s narrative. As to the US election, too many are simply going along with their phony statements that the election has been decided, it is all over, and it is time to move on. They have bought the lies that we must cave in and accept the notion that Biden is somehow not just POTUS but the messiah, the one to bring peace and love to America.

Of course true Christians are not to be like that. They are to be discerning and wise. They are to test everything – and that includes what we hear about concerning the political world. We do not just take at face value what the media or anyone else is dishing up. We seek to find the actual truth in whatever area we are examining.

Sure, that can take some effort. But with things like the internet, we can do a lot of our own research and make up our own minds. Yes, we need wisdom and care here, as there is far too much foolishness and fakery online. But we dare not remain naïve and uninformed on such important matters as politics in general and elections in particular.

This too I have just recently discussed: billmuehlenberg.com/2020/11/10/the-sin-of-cluelessness/

As mentioned, other faulty extremes could be examined in an article such as this. Plenty of bad thinking can be found concerning how Christians regard politics and their involvement with it. But if we can challenge and more or less get right the five extremes I mentioned above, we would all be much better off.

And we would make a better contribution to the political arena, and even more importantly, we would better serve our Lord.