A few recent indications that Australians might be fighting back – finally!

There have been a few recent events in the Australian political scene that seem to be rather encouraging and may indicate that we are not quite yet at the bottom of the barrel. A few acts of brave resistance seem to indicate that not everyone has capitulated to the deep state here, and there may be some hope for our nation and its future. 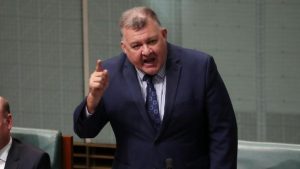 But before my many detractors and critics try to accuse me of hypocrisy here, let me say that this is simply not the case. Yes, of late I have penned a number of articles on the related themes of the political malaise we find ourselves in, and how our only ultimate hope is not in politics, but in Christ alone.

What then are these recent events that might give us all some hope? Two stand out. The first is the surprise move by Federal MP Craig Kelly to leave the Liberal Party and join the crossbench. This is all over the media right now. See here eg., www.smh.com.au/politics/federal/craig-kelly-resigns-from-the-liberal-party-to-move-to-the-crossbench-20210223-p574zq.html

The truth is, Kelly is one of the best MPs we have. He has consistently and courageously been defending genuine conservative values and concerns all along, even while so many of his Liberal Party colleagues have too often simply been weak as water. Some fellow MPs have withstood him as he has opposed attempts by the Libs to move to the left on energy and climate change policies for example.

He has strongly stood against the Rona hysteria and lockdowns, and has championed hydroxychloroquine and ivermectin to help treat coronavirus. But he has been given the cold shoulder by Morrison and his mates – even chewed out publicly!

Kelly is actually another Trump type of politician – he is seeking to drain the swamp, stand against the fake news, and expose all the pretend conservatives. For that alone he should be the Prime Minister, while ScoMo should be sitting on the back bench.

He is one of the best and most consistent conservatives in federal politics today. But sadly, good men like Kelly are effectively being pushed out of the Liberal Party. It is heading ever more to the left, leaving real conservatives like Kelly high and dry.

So this is a loss for the Libs and a gain for the crossbenchers. As Herald Sun columnist Rita Panahi put it, “So, the Liberal party can accommodate Matt Kean but not Craig Kelly. The ‘broad church’ needs repairs.” Yep. But it may have been a very smart move by Kelly. While he was with the Libs it was in an uphill battle to stand strong for conservative principles, and the Libs gave him little support.

But now as a backbencher, and with the Libs having an increasingly slim majority, they will now finally have to treat him with some actual respect if they hope to have him vote their way on key issues. So ironically, the Libs may now treat Kelly better than they did when he was on their team.

Please keep Craig in your prayers, thanks. The left-wing media of course has long been attacking him. FascistBook for example just recently banned him for a month. And when your own party will not even support you, that is bad news indeed. We clearly need many more champions like him. They are a rare breed – few and far between.

My second recent case of a possible resurgence in people power and a fightback to the powers that be involves a tennis match, of all things. I did not watch the men’s final of the Australian Open, but we all heard about it afterwards. Num num bigwigs giving political speeches got the crowd upset – and rightly so.

When Tennis Australia President Jayne Hrdlicka started rambling on about vaccines, and about how terrific Victorian Premier Dan Andrews was, that got the masses stirring. Boos rang out, and that caught most folks by surprise. See this two-minute video clip: www.youtube.com/watch?v=JjVqCYQGeKo&fbclid=IwAR3kfno99Iy_GiqZOyGXUUCyVHWtBp5D3WbnQ7Z_JA23FWWicjDSU_RK-Co

As Chris Kenny said, the Sunday evening crowd gave a “timely reality check on the media political class.” The truth is, folks are fed up with Andrews and his lockdown madness. And they are getting sick and tired of the politicisation of everything, including sport. When they come to an event like the Open, they are leaving their worries and cares behind – including the dreary world of politics and political correctness.

They do not want to be lectured to by some PC twit with an agenda – they want to enjoy the tennis, and that is all. So the booing crowd – while sending shivers down the spines of the loony left, offending them big time – gave me a real confidence boost. Finally, a bit of fightback.

Rita Panahi also spoke about this event and is worth quoting from:

Long suffering Victorians who booed when a sports official foolishly veered into motherhood statements and politics during the presentation ceremony at the Australian Open, have been branded “disgraceful” and “unAustralian”.

Tennis fans deserve better than to be admonished by the professional Karen brigade for not wanting to cop a lecture about the pandemic and the wonderfulness of the Victorian government during a sporting event.

Those who like to pretend they’re our moral superiors are determined to view the booing as representing some sort of anti-vaxxer sentiment. What utter tosh.

The simplistic and profoundly stupid narrative that the crowd were booing vaccines has spread far and wide with dimwitted sports journalists misunderstanding the public mood and maligning Australians in publications across the globe from the UK’s Telegraph to the New York Times.

Victorians weren’t booing the COVID vaccine program; Australia has some of the highest immunisation rates in the world and the overwhelming majority of the population will voluntarily get the COVID-19 vaccine.

The booing had nothing to do with vaccines and everything to do with frustrated sports fans, who had endured multiple lockdowns including one lasting 112-days, not wanting to cop platitudes and political posturing during a sporting event they’d paid through the teeth to witness.

Yes quite right. So there you have it: two small but significant steps. Maybe Australians are finally beginning to wake up. Maybe Australians have decided that enough is enough, and they ain’t gonna take it anymore. I sure hope so. Just when I was despairing of Australia heading down the gurgler for good, a bit of resistance has given me some hope.

It should give you some hope as well.

13 Replies to “There May Be Some Hope Yet”