In an Internet age news travels fast. I can be sitting in the middle of the Netherlands and within moments learn about events happening far away on an Australian TV show. I even shared a video with my companions about it not long after it occurred. 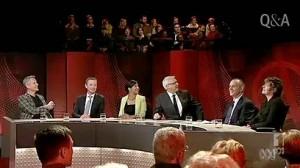 I refer to the now infamous but all too predictable Stalinist assault by rent-a-crowd lefties and students on the ABC debate show Q&A. I of course have written about this atrocious show far too many times already. It pretends to be a legit debate show but is nothing of the sort.

It is a hothouse of leftism pure and simple. Any conservatives who might happen to get on are mere token conservatives, and they are always greatly outnumbered by the host, by other panellists, and by the audience. So the Stalinist attack on the show last night was not all that surprising really.

And host Tony Jones basically just sat there and did nothing to make it stop. Imagine if a group of screaming conservative protestors sought to disrupt the show. They would instantly have been set upon by security, and hauled off. But this sordid episode by the manic lefties was allowed to drag on and on.

You can see the incident here: www.youtube.com/watch?v=ND290z2kr2o

Of course this was not the first time a conservative was attacked while on the show. Recall how the then Prime Minister John Howard was set upon, and had a shoe thrown at him by a leftist ranter and railer. But we should not be surprised at such assaults I guess.

And already we have lefty commentators defending the disruption, predictably on the pages of like-minded rags such as the Sydney Morning Herald. But much more sane voices know what a travesty this was. It is the usual reaction of the loony left: shout down anyone you disagree with, all in the name of tolerance and acceptance of course.

It is the hate brigade in action. This is how they always operate. They will scream and shout down any opposition, and prevent any other points of view from being heard. All in true Stalinist fashion. It is early days yet, but commentators with a bit of sense are already discussing the episode.

Andrew Bolt for example had this to say:

Last night’s shambolic Q&A proves:
– just how easy it has been for the Left to infiltrate the Q&A audience, often claiming to be conservatives. At least two of the first three questions came from people who identified as Socialist Alternative speakers. Then the show was interrupted for several minutes by at least half a dozen sympathisers, chanting slogans and unfurling a banner. Other questioners sounded like fellow travellers. So much for the vetting. Q&A claimed the audience comprised Coalition voters 47 per cent, ALP 38, Greens 9. Utter rubbish.
– how foul a world would be led by socialists like these students. They were rude (one shouted “liar” at Christopher Pyne, misrepresenting Pyne’s opinion), they repeatedly heckled Pyne and shouted him down, they ended all discussion for several minutes by chanting and forcing Q&A to break transmission, they demanded others pay for their privileges, they lied in claiming our education system was only for the rich. Abusive, selfish thugs with no respect for the opinions of others. The kind of people who created the Gulag Archipelago.
It is the totalitarian instinct made manifest.

Yes quite so. These folks shout all day about freedom and tolerance, but they refuse to show it to anyone else who dares to differ with them. But at least this episode may have some good effect: another article speaks about how the ABC may have to actually rethink the way they do their show – at least in terms of audience selection:

“The ABC will review its procedures for choosing audience members for Q&A after student activists’ chants forced the live show off air for several minutes on Monday night. The ABC will also apologise again to the education minister, Christopher Pyne, a panellist on the program who was the subject of much of the protest.”

We will see if any changes of substance will happen. I am not holding my breath here. Years of leftist intimidation and bias on the ABC simply feed this Stalinist mindset and culture. If anything, we can expect to see more of it. The radical left does not know how to properly argue and debate – it only knows how to terrorise and bully all those who do not share their point of view.

Stalin would be proud.